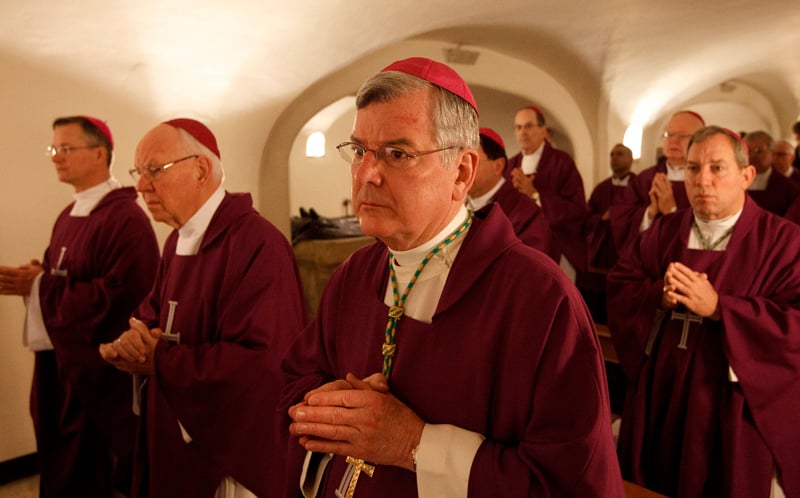 Archbishop John C. Nienstedt of St. Paul and Minneapolis, center, and other bishops from Minnesota, North Dakota and South Dakota concelebrate Mass at the Altar of the Tomb in the crypt of St. Peter’s Basilica at the Vatican on March 9, 2012. Photo by Paul Haring, courtesy of Catholic News Service

(RNS) The Vatican on Monday (June 15) launched a major housecleaning of the scandal-plagued Archdiocese of St. Paul and Minneapolis, accepting the resignation of Archbishop John Nienstedt along with that of a top Nienstedt aide, Auxiliary Bishop Lee Piche.

The moves come a little over a week after authorities charged the archdiocese for failing to protect children from an abusive priest and days after Pope Francis unveiled the first-ever system for disciplining bishops who do not act against predator clerics.

A Vatican spokesman, the Rev. Federico Lombardi, told reporters he did not know whether Nienstedt and Piche would be subject to further canonical investigation under the new process. “The situation is too complex to make a prediction on this yet,” he said, according to the Catholic news site Crux.

In April, Bishop Robert Finn of Missouri, who three years earlier became the first bishop convicted of failing to report a priest suspected of child abuse, was forced to resign, effectively the first bishop in the decades-long crisis that the Vatican pushed out for covering up for an abuser.

Also Monday, in an unprecedented move, the Vatican announced that its onetime ambassador to the Dominican Republic, the former Polish archbishop Jozef Wesolowski, would stand trial in the Vatican on charges he paid for sex with children.

Observers say these latest moves seem to signal an unprecedented effort by Rome to hold bishops accountable in the abuse crisis.

“I think this is a great tribute to Pope Francis,” Cardinal Donald Wuerl of Washington, one of the pontiff’s top allies in the U.S. hierarchy, said when asked about Nienstedt’s resignation.

Wuerl was speaking at a conference bringing together bishops and labor leaders at the AFL-CIO headquarters in Washington to talk about the economy.

Wuerl said that while the Catholic Church has done a good job of addressing the problem of abusive priests, “What the pope has done is assure this also includes those responsible for supervision.”

For his part, Nienstedt did not voice any regrets.

In a statement, the archbishop said he was stepping down “to give the Archdiocese a new beginning amidst the many challenges we face,” adding: “I leave with a clear conscience.”

Piche said he resigned because the archdiocese needs “healing and hope” and he said “I was getting in the way of that.” He said he made his decision “willingly, after consultation with others in and outside the Archdiocese.”

Almost from the time he took over in the Twin Cities in 2008, Nienstedt, 68, became a polarizing figure as an outspoken conservative, especially with his focus against gay rights and same-sex marriage.

But in the past few years questions about his alleged failures to take a hard line on abusive clerics, especially a former priest now in prison, Curtis Wehmeyer, have made him a target of criticism from all sides.

Persistent questions about Nienstedt’s own personal conduct also became an issue; last year Nienstedt gave Piche, 57, the job of investigating allegations of misconduct against him, one of two separate probes of Nienstedt’s personal behavior.

In charging the archdiocese earlier this month, Ramsey County Attorney John Choi said prosecutors were alleging “a disturbing institutional and systemic pattern of behavior” over the course of decades at the highest levels of leadership in the archdiocese.

Nienstedt was not personally charged, but authorities said the investigation was continuing and further charges could be filed.

Francis appointed Archbishop Bernard Hebda  as the interim leader in Minneapolis-St. Paul until a permanent replacement is found. Hebda is currently in New Jersey preparing to take over the Archdiocese of Newark, N.J., next year when Archbishop John Myers is expected to retire.

A brief note from the Vatican provided no details on Nienstedt’s resignation. It said only that he resigned under the provision of canon law that states that a bishop “who has become less able to fulfill his office because of ill health or some other grave cause is earnestly requested to present his resignation from office.”

Victims advocates who have long pushed for Nienstedt’s removal — and who have greeted Francis’ “get tough” policies with skepticism — were not impressed with Monday’s moves.

“It’s only a very tiny drop of reform in an enormous bucket of horror,” said Frank Meuers, a Minnesota leader of the Survivors Network of those Abused by Priests, or SNAP, a national clergy victim advocates group.

“Neinstedt’s departure will, in the short term, make some adults happier,” he said. “By itself, it won’t, in the long term, make many kids safer.”

Nienstedt’s exit could also be another blow to church conservatives who already felt the winds shifting against them under Francis’ papacy.

Like Finn in Missouri, Nienstedt has been a champion of their culture war focus, and Nienstedt and his defenders argued his outspokenness had made him a target.

“As one conservative bishop after another is summarily removed over allegations of mishandling accusations of sexual abuse against other priests, we await the day when liberal bishops and cardinals who are guilty of equal if not greater offenses would experience the same treatment,” wrote a blogger at the conservative church website Rorate Caeli.

“Nienstedt’s sin is that he is an orthodox Catholic,” William Donohue of the Catholic League wrote Monday in defense of Nienstedt. “He is a good man who was unfairly treated.”

(Mark Silk contributed to this report from Washington, D.C.)