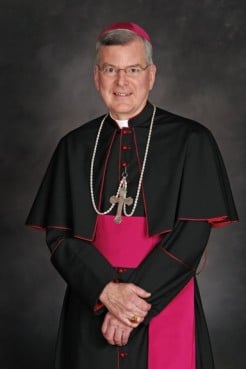 Minneapolis-St. Paul Archbishop John Nienstedt is under fire, again, for allegations that the archdiocese failed to protect children from abusive priests.

MINNEAPOLIS (Reuters) -Prosecutors in Minnesota brought criminal charges on Friday against the Roman Catholic Archdiocese of St. Paul and Minneapolis, accusing it of failing to protect children in connection with a priest who pleaded guilty in 2012 to sexual abuse.

Ramsey County Attorney John Choi said prosecutors were alleging “a disturbing institutional and systemic pattern of behavior” over the course of decades at the highest level of leadership in the archdiocese.

The six misdemeanor charges and a related civil complaint seek to hold the archdiocese accountable for the victims’ needs for protective services and their delinquency resulting from the conduct, Choi said in a statement.

Choi said the archdiocese failed to respond meaningfully to “numerous and repeated reports” of troubling conduct by priest Curtis Wehmeyer from his entrance into seminary in 1997 until his formal dismissal as a priest in March of this year.

The charges stem from an investigation into the archdiocese’s handling of Wehmeyer starting in March 2014 that included interviews with more than 50 witnesses and the review of 170,000 pages of documents.

According to the New York Times,  Wehmeyer, 50, was sentenced to five years in 2013 for criminal sexual conduct and possession of child pornography. He is in prison in Minnesota, and he has been charged with sex crimes in Wisconsin.