(RNS) The two big religion news stories of 2015: The “nones” are up! And, religious orthodoxy is up!

“Nones” refers to those who either are unaffiliated with a religious tradition or who say they have no religious beliefs — none. Together, the upticks in nones and in orthodoxy appear incompatible: Why should people be getting both less and more interested in religion? Yet the reason for the first is the same as for the second.

An increase in nones doesn’t mark a disinterest in religion as much as an interest in interesting religions.

At first, the story of religion in the U.S. looks bleak.

Nones are now 23 percent of the U.S. adult population, up from 16 percent in 2007, with increases across racial, ethnic, educational, geographic and income groups, according to a sweeping Pew survey. 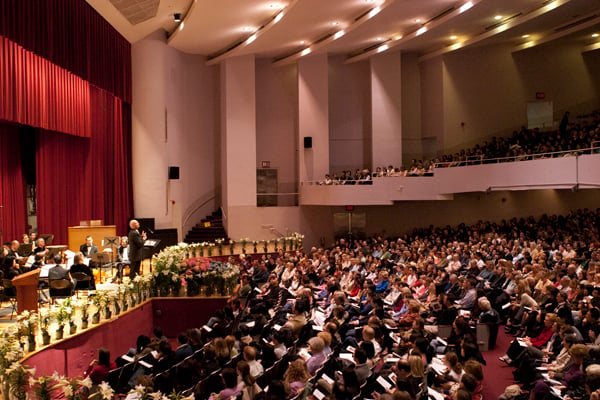 Redeemer Presbyterian Church, one of the most influential evangelical churches in the country, is led by author and speaker Tim Keller. Photo courtesy of Godwell Andrew Chan

The nation’s mainline Protestants and Roman Catholics were both down.

But not all religions are losing equally, or losing at all. In spite of the much-touted rise in nones, a decades-old pattern persists: Mainline faiths are down, while numbers in more orthodox faiths rise.

Parsing the data, historian Jonathan Sarna writes, “a religion that believes in strict adherence to rules and rituals thrives at a time when personal choice seems to reign as the cultural norm. But traditional religious values can be said to be the great success story of many major religious groups since the 1970s; witness the phenomenal rise of evangelical Christianity and Mormonism as examples.”

Sarna did not note the elephant in the room: The appeal of extreme religious ideologies, such as those the so-called Islamic State advocates, is also the provision of “values” and sense of framework and purpose (and not only relief from socio-economic duress).

Neither Sarna nor I confuse evangelical Christianity, Mormonism or Orthodox Judaism with ideologies such as those ISIS promotes. The point is that having a sense of purpose and values beyond one’s lifestyle is powerfully part of the human condition.

The search for values shows up as well in those curious statistics about the nones. The 23 percent of the population that make up the nones consists of two groups: those who are atheist or agnostic (7 percent) and those who say their religion is “nothing in particular” (16 percent).

That is, more than double the 7 percent take the time to distinguish themselves from atheists and agnostics and note that they have religious or spiritual beliefs or feelings, but not of an established sort.

In short, with the exception of atheists and agnostics, nones appear to be people who are moved by some kind of faith. They may not have found it in the organized religions they know. But where they are seems to be where those moving to orthodoxy are — interested in a substantial spiritual framework that speaks to them — yet unwilling to sign up until they find it. As many of the nones are young, they may yet find it.

What interests them is robust worldviews that offer consistent, “thick” grounds for values, ethics and ways of living. This doesn’t mean “mainstream” religions don’t offer those things, but if the numbers are in any way useful, it might mean they have some work ahead showing people that they do.

Those interested in religions that engage heart and mind and offer a compelling guide to one’s relations with world and others (as opposed to the violent ideologies of ISIS and its ilk) may yet present a promising prognosis for the new year.

(Marcia Pally teaches multilingual multicultural studies at New York University. Her new book, “Commonwealth and Covenant: Economics, Politics, and Theologies of Relationality,” will be out in early 2016.)