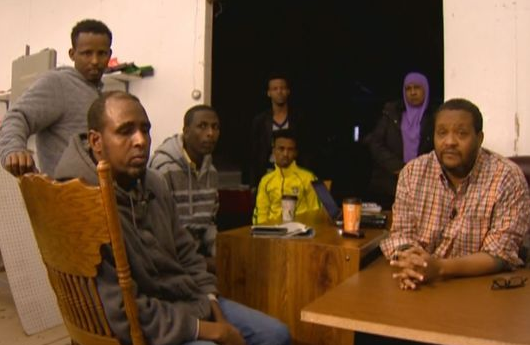 Some of the fired workers from a meat packing plant in Colorado meet with their translator. Photo by Chris Hansen/9NEWS courtesy of USA Today Network.
January 1, 2016
Reuters 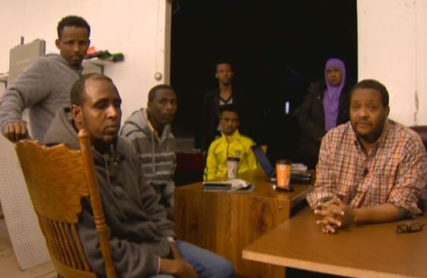 Some of the fired workers from a meat packing plant in Colorado meet with their translator. Photo by Chris Hansen/9NEWS courtesy of USA Today Network.

DENVER (Reuters) - Nearly 200 workers, mostly Somali immigrants, have been fired from a meat-packing plant in Colorado after staging a walkout to protest what they said were insufficient prayer accommodations, the company and Islamic advocacy groups said on Thursday.

The Council on American-Islamic Relations (CAIR) said the workers were treated in a "discriminatory manner" by managers at the Cargill Meat Solutions facility in Fort Morgan, about 75 miles northeast of Denver.

Jaylani Hussein, a spokesman for CAIR, said in a YouTube video posted by the group that the workers objected to new restrictions on their ability to worship on the job, "which they had been granted for a long period of time."

"All of these employees are good employees (and) don't have any other issues," Hussein said, adding that the dispute stemmed from a "misunderstanding on policy changes" by Cargill regarding workplace prayer.

Mike Martin, a spokesman for Minneapolis-based Cargill, disputed assertions the company had changed its policy, noting that since 2009 the Fort Morgan plant has set aside an on-site "reflection area" for people of all faiths.

"Cargill makes every reasonable attempt to provide religious accommodations to all employees based on our ability to do so without disruption to our beef-processing business," he said. He said the degree of flexibility the company can extend for prayers depends on a variety of factors, including daily work-flow considerations.

Martin said about 200 workers walked off the job last week and were warned that failing to show up for work on three consecutive days without calling in could jeopardize their employment.

Plant managers met with the workers, members of the Somali community and Teamsters union leaders who represent nearly 2,000 hourly workers at the plant but were unable to resolve the issue, he said.

READ: 3 reasons Christians should back religious freedom for all (COMMENTARY)

After 190 workers failed to show up without notice for three days straight, "termination procedures were initiated" and those workers were dismissed, Martin said.

Omar Jamal, executive director of the Somali Human Rights Commission, said Cargill managers may not have understood that depending on the time of year Muslims are required to pray at different times during the day.

Jamal said his organization has contacted Cargill to see if the workers can get their jobs back.

"Hopefully, there can be a clear policy in place that everyone understands that would solve the problem," he said.

Cargill employs 155,000 people in 68 countries, according to the company's website.