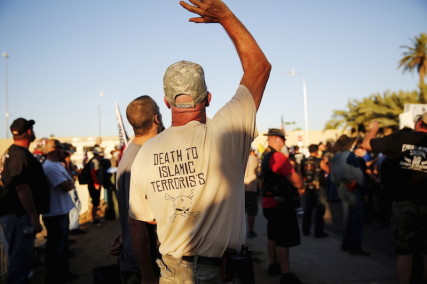 As a demonstrator waves during the “Freedom of Speech Rally Round II” across from the Islamic Community Center in Phoenix on May 29, Christian counterprotesters carried “Love Thy Neighbor” signs. REUTERS/Nancy Wiechec *Editors: This photo may only be republished with RNS-RELIGIOUS-RIGHTS, originally transmitted on Dec. 30, 2015.

(RNS) Eight in 10 Americans say it’s very or extremely important for people like themselves to be allowed to practice their religion freely.

However, support for religious freedom plummeted when people were asked about other traditions, according to a survey released Wednesday (Dec. 30) by the National Opinion Research Center for Public Affairs Research and The Associated Press.

For Christians, the percentages were nearly identical when asked about people like themselves. The AP-NORC poll was conducted online and by phone. The overall margin of error is plus or minus 3.9 percentage points.

READ: America welcomes Christians, Jews; atheists, Muslims not so much

Charles Haynes, director of the Religious Freedom Center of the Newseum Institute, told AP that ideas of religious liberty have become politicized and polarized.

But Republicans and Democrats were statistically tied in prioritizing religious freedom for Christians but not for Muslims in the survey, conducted Dec. 10-13, while campaign rhetoric about Muslims was intense.

Political independents lagged on all the measures, with fewer than 69 percent supporting religious freedom for Christians, 57 percent for Jews, 56 percent for Mormons and 49 percent for Muslims.

The survey was conducted after extremist Muslims launched terror attacks in Paris and San Bernardino, Calif. In the aftermath, there’s been a wave of vandalism and arson at U.S. mosques.

Recent months have also seen a furor over gay marriage and the rights of religious Christians to refuse to provide same-sex couples with marriage licenses. Kentucky clerk Kim Davis spent five days in jail for refusing to issue licenses.

Last week, the new governor of Kentucky ruled that license forms would not include a clerk’s name. It’s still unclear whether that will meet religious liberty objections by some conservative Christian groups.

According to AP, earlier polls with the NORC have found “dwindling confidence in the government’s defense of religious liberty, with 75 percent in 2011 saying the government was doing a good job, compared with 55 percent who said so this month.”

Americans, particularly Christians, are tense about the religious mix with more non-Christian immigrants and the rapid rise of people with no religion.

The latest Pew Research survey of America’s religious landscape found that although Christians make up 70 percent of Americans, this is a significantly less Christian country than it was seven years ago, with the percentage down nearly 8 points from 2007.

People with no religious identity rose 6.7 percentage points in the same period. The rising influence of these “nones” helped boost support for the legalization of same-sex marriage, an issue hard-fought against by evangelical Christians and Catholics.

Muslims and Hindus, while still very tiny minorities in the U.S., also increased their share of the religious marketplace. And attention to their rising numbers, together with political rhetoric about potential Muslim immigration, may have shaped views revealed in the survey.