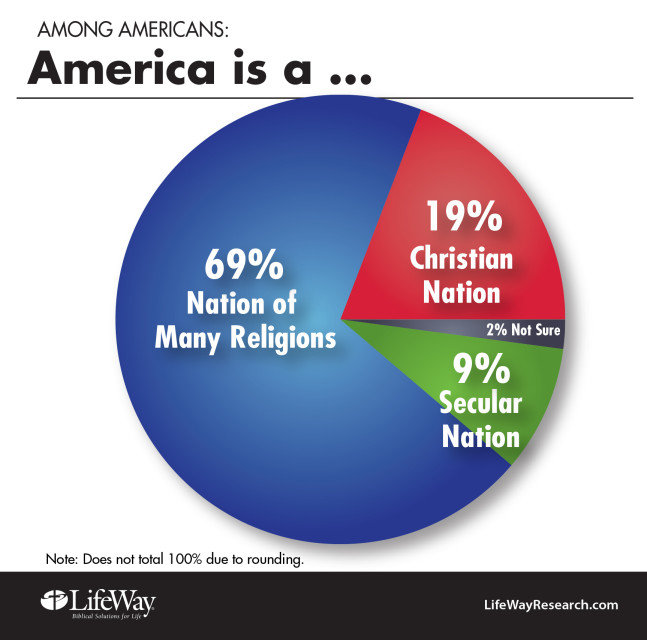 (RNS) Americans are all for religious freedom — but disagree on who can claim it.

Diverse religious groups are recognized — but Christians and Jews are significantly more welcome than atheists, and many don’t see a welcome mat for Muslims. And not everyone means the same thing when speaking of a “Christian” nation.

The survey finds overwhelming agreement on the meaning of religious freedom. More than 9 in 10 say Americans are free to choose their religious beliefs, to practice their faith in daily life, to build a house of worship and to tell others about their beliefs.

READ: The one group still excluded from the Boy Scouts — atheists

But there is a big gap in views on whether business owners should be free to “run a business in accordance with their beliefs.”

While 78 percent overall said this is an “American right,” that fell to 62 percent among those who don’t identify with any particular religious group.

The LifeWay survey of 1,000 U.S. adults was conducted in September 2014, after the Supreme Court ruled that the evangelical owners of the Hobby Lobby craft store chain did not have to offer insurance coverage for contraception. While the high court did not legalize same-sex marriage nationwide until June, when the survey was being conducted there were already nationally publicized state court cases involving wedding vendors refusing service to same-sex couples.

“When we ask people about what America thinks, what America is like, their answers are influenced by what is flashing in their minds. The news. The people they know. What they’ve seen themselves or what their friends experienced,” he said.

Take the question of whether the United States is a “Christian nation.” Only 19 percent say it is, even though Christians make up 70 percent of the population.

McConnell says answers to the survey depend on people’s frame of reference. “Do they define ‘Christian nation’ by population or by ideology — by whether they think Christianity is driving the thinking, driving the culture of the nation?” 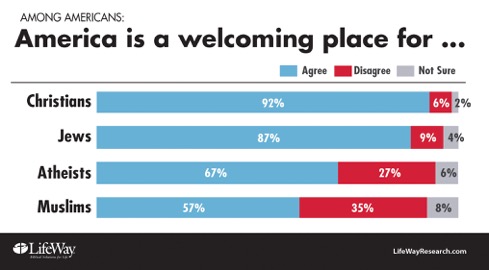 Nearly 7 in 10 (69 percent) recognize the USA as a nation of many religions. However, that doesn’t translate to a welcome mat at everyone’s front door.

Roughly 9 in 10 Americans say it is a welcoming place for Christians and Jews. Only 67 percent say it is welcoming to atheists, usually in last place on public favorability polls.

And just 57 percent see America as welcoming to Muslims, according to the survey, which has a margin of error of plus or minus 3.4 percentage points.

David Silverman, president of American Atheists, was not surprised by the numbers — but not pleased by them, either.

“You are not all that happy when you are the second-most-unwelcomed group in the country. It feels terrible to be completely unrepresented in Congress or for the entire Republican Party to view us as irrelevant at best and immoral at worst,” said Silverman.

Ibrahim Hooper, spokesman for the Council on American-Islamic Relations, shrugged at the statistic.

“It’s not really clear if this is good news or bad news. People of faith are predisposed to welcoming other people of faith. So I’ll give this the best possible interpretation — that people are hoping they are welcoming,” he said.

He’s waiting for the day that surveys ask, “How welcome do Muslims feel in America?”