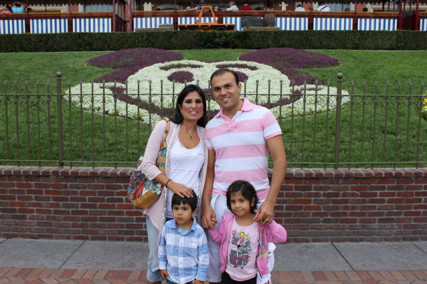 American Pastor Saeed Abedini, a Muslim convert to Christianity, faces a possible death sentence after his September 2012 arrest and subsequent indictment in Iran because of his religious beliefs. The Iranian government refuses to recognize his U.S. citizenship or make his charges public. Abedini’s U.S.-based family is being represented by the American Center for Law and Justice (ACLJ). Photo courtesy American Center for Law and Justice

(RNS) Saeed Abedini, a pastor jailed in Iran since 2012 for allegedly setting up house churches, was one of four Iranian-Americans freed Saturday (Jan. 16) in a prisoner deal with the U.S. linked to the nuclear deal between Iran and six world powers.

Abedini’s cause has been championed by Christians around the world, and especially evangelicals in the U.S. who have strongly pressured the Obama administration to work more vigorously for his release.

The president was criticized in particular for not making Abedini’s release a condition of the pact aimed at preventing Iran from developing nuclear weapons, though it turns out those negotiations were going on in secret.

But for some of Abedini’s supporters his cause was complicated when his wife, Naghmeh, last November revealed that her husband, 35, had abused her physically, emotionally and sexually, for years and was addicted to pornography.

Nahmeh Abedini was among the first to confirm his release via Twitter:

It is confirmed: Saeed is released from Iranian prison.

She also released a statement via the American Center for Law and Justice, the most prominent conservative group to take up Abedini’s cause, saying her husband’s release “has been an answer to prayer.”

“This is a critical time for me and my family,” she continued. “We look forward to Saeed’s return and want to thank the millions of people who have stood with us in prayer during this most difficult time.”

The couple have two children and their home is in Boise, Idaho.

In an interview with the Washington Post, Nahmeh Abedini said she and her husband had been speaking by phone and through Skype but have not spoken since October.

“When he gets home, we can address the serious issues that have happened and continued,” she told the Post.

She said she was not sure whether her husband would continue to serve as a pastor.

“I think he would have to deal with a lot of issues,” she said. “There will need to be a time of healing for him and his family.”

Saeed Abedini was born in Iran, converted to Christianity from Islam, and became a U.S. citizen in 2010. He and his wife traveled frequently to Iran on mission work. In 2012 he tried to enter Iran, where he was working to set up an orphanage, to see his parents. But he was put under house arrest and later put in prison, his wife told the Post.

She said her husband had been beaten and interrogated when he was first imprisoned and suffered internal bleeding, but she does not know his current physical condition. She was not sure whether she would fly to meet him, possibly in Europe, or wait for him to return to the U.S.

Iran first announced that it released four Iranian-Americans, and in exchange the U.S. said it would drop or stop pursuing charges against seven Iranians for violating sanctions against Teheran.

The first prisoner whose identity was confirmed was Washington Post reporter Jason Rezaian, who spent 18 months in Teheran’s notorious Evin Prison. His case was championed by press organizations and received wide attention as his health reportedly began to suffer.

Iranian media then reported that Abedini was also among those freed.

The two other two freed are Amir Hekmati, 32, a Marine veteran from Flint, Mich., imprisoned since August 2011; and a man named Nosratollah Khosavi-Roodsari, whose imprisonment had not been publicized.

A fifth prisoner, the American student Matthew Trevithick, was released separately from the other four, a U.S. official told Reuters.

The only other Iranian-American who had been known to be in Iranian custody, Siamak Namazi, a businessman in his 40s, who has been held without any known charges since October, was not included in the deal.

American officials had pushed to include the release of the prisoners in the nuclear deal worked out last year but were unsuccessful.

There were expectations that improving ties following the deal could lead to their release, and Saturday’s developments came as the International Atomic Energy Agency prepared to certify Iran’s compliance with the nuclear deal. That it turn triggered steps to lift U.N. sanctions against the country and return an estimated $50 billion in frozen Iranian funds.

Tens of billions more in frozen funds are to be used to pay Iranian debts.

Religion Hub
Who are Iran’s morality police? A scholar of the Middle East explains their history
Follow us on Facebook!
Submit your photos to RNS