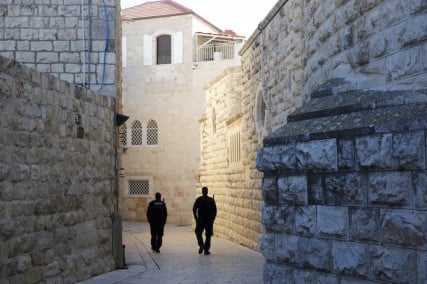 Israeli policemen walk near the Dormition Abbey in Jerusalem’s Old City, after anti-Christian graffiti was found on some of it’s exteriors. Photo by Ronen Zvulun courtesy of Reuters.

JERUSALEM (Reuters) Israel ordered a high-priority police investigation on Sunday (Jan. 17) into anti-Christian messages scrawled in Hebrew on the walls and doors of a Jerusalem monastery, saying they marked an assault on religious harmony.

“Idols will be extirpated” — a line lifted from the Jewish prayer service — and “Christians Go to Hell” were among graffiti written on the Dormition Abbey with felt-tip pens. The varying handwriting suggested several vandals had been involved.

The Benedictine monastery, on Mount Zion in the Old City, marks the site where Christian tradition says Mary, the mother of Jesus, died or “fell asleep,” as the name suggests. It is the highest point in the ancient city and is near the site if the Last Supper as well as a tomb revered as the last resting place of the biblical King David and which draws many Jewish worshipers.

The monastery, along with a Greek Orthodox seminary next to it, has previously been targeted by what police believe are Jewish extremists.

The most recent attack was in 2014 shortly after the visit of Pope Francis. Earlier this month, two Israelis, including a minor, where charged over the 2014 incident at the Dormition Abbey as well as an arson attack at a church in Galilee in the northern part of the country.

“This time it amounts to a real call to murder Christians,” a spokesman for the Church of the Dormition, Wadi Abu Nassar, told Agence France-Presse on Sunday.

“We will not let anyone undermine religious coexistence in Israel,” Internal Security Minister Gilad Erdan said in a statement, adding that police would put a high priority on “nabbing those who carried out this despicable act.”

Rabbi David Rosen, Jerusalem-based head of interreligious affairs for the American Jewish Committee, also urged authorities to find the perpetrators and prevent further incidents: “There must be zero tolerance for such vile acts of hate.”

“Once again, we are compelled to condemn vandalism of Christian holy sites in Israel, mindful that such acts of hatred not only threaten Christians, but also are a reprehensible affront to our Jewish heritage and contravene Israel’s enduring commitment to respect for other religious faiths,” Rosen said in a statement.

Israel has been struggling with a spate of hate crimes by suspected Jewish ultra-nationalists targeting Christian sites as well as Palestinians and Israeli human rights activists.

In a statement, the Latin Patriarchate of Jerusalem described the Dormition Abbey as “a significant place for interreligious dialogue between Judaism and Christianity” and voiced “hope that the perpetrators (of the vandalism) will be arrested before they put proposed threats into action.”

Jerusalem’s Old City, which Israel captured in the 1967 war and annexed in a move not recognized abroad, has been on heightened security alert during a months-long wave of Palestinian street violence, with wall-to-wall security camera coverage and paramilitary police patrols.