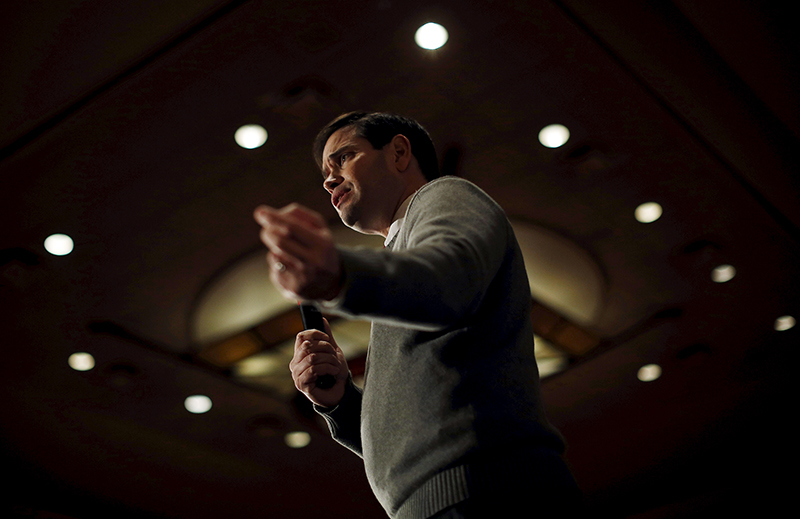 U.S. Republican presidential candidate Marco Rubio speaks at a campaign event in Coralville, Iowa, on January 18, 2016. Photo courtesy of REUTERS/Jim Young
*Editors: This photo may only be republished with RNS-RUBIO-ATHEIST, originally transmitted on Jan. 20, 2016.

WAVERLY, Iowa — Confronted by an “activist atheist,” Marco Rubio said he’ll champion a country where “no one is forced to violate their conscience.”

During a town hall on Monday morning (Jan. 18), Justin Scott, 34, of Waterloo asked about Rubio’s new ad, explaining that he and other atheists are “looking for somebody that will uphold their rights as Americans, and not pander to a certain religious group,” he said.

In the commercial, Rubio does not mention specific political policy but discusses how “our goal is eternity, the ability to live alongside our creator for all time. To accept the free gift of salvation offered by Jesus Christ.”

RELATED STORY: 5 faith facts about Marco Rubio: ‘Once a Catholic, always a Catholic’

Rubio went on to explain how his faith has been the “single greatest influence in my life, and from that I’ll never hide.”

The ad may signal a greater appeal by Rubio to social conservatives, in addition to the business-minded voters who are backing him, said Chris Larimer, a political science professor at the University of Northern Iowa.

Rubio and his supporters have said he will unite the Republican Party.

But in Iowa, the two branches of the party have been drawn to different candidates. In 2012, for example, many evangelical voters supported Rick Santorum while establishment voters backed Mitt Romney.

“I think what he’s trying to do is put a foot in both pants,” Larimer said.

Social conservatives have become an increasingly important voting bloc in Iowa and could total 40 percent of likely caucusgoers this year, he said.  “He’s emphasizing faith this late in the campaign; that would suggest to me that his campaign sees an opening there,” Larimer said.

Rubio is third place in Iowa, with nearly 12 percent, according to a rolling average of polls. And on either side are two rivals who have appealed greatly to evangelical voters: Ted Cruz, with nearly 27 percent, and Ben Carson, with nearly 9 percent.

But others question whether a faith-based ad will have the same effect as discussing his religious views in person. Cruz, for example, has campaigned at churches and discussed his Christian beliefs more frequently in Iowa as part of his 99-county tour.

David Andersen, a political science professor at Iowa State University, said that Rubio’s use of a commercial to share his faith runs the risk of seeming “impersonal.”

But after Rubio shared his beliefs Monday morning, Deb Berstler said she was impressed with his candor and sincerity.

She expects candidates such as Mike Huckabee, a pastor, to discuss their faith on the campaign trail — and said it was refreshing to hear it from Rubio.

“I think it’s the first time I ever heard a candidate present his faith as deeply and extensively as he did,” said the 64-year-old, noting Rubio answered the atheist’s question respectfully. “That’s going to set him apart.”

(Mackenzie Ryan reported this story for the Des Moines Register)