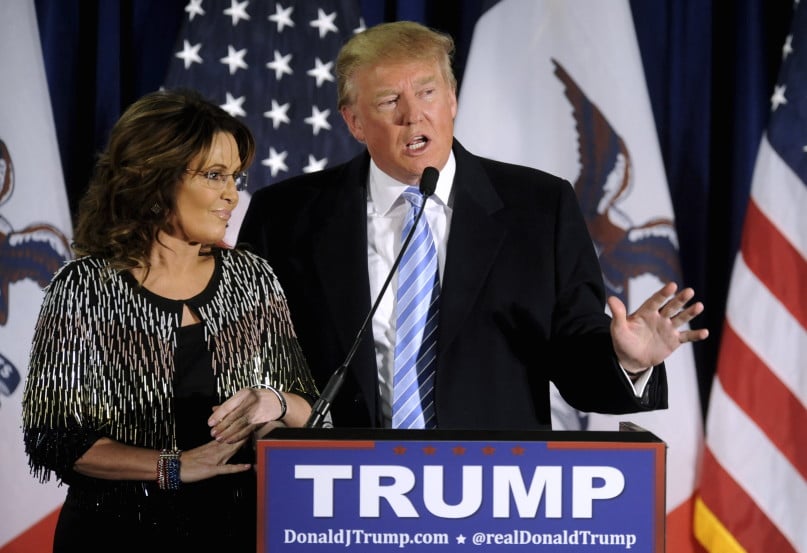 Palin, a former Alaska governor who was Republican Sen. John McCain’s running mate in the 2008 election won by Democrats Barack Obama and Joe Biden, appeared with Trump on Tuesday (Jan. 19) at a rally in Ames, Iowa, two weeks before the state’s Feb. 1 caucus, the country’s first nominating process ahead of the Nov. 8 election.

Trump has led national opinion polls among Republicans for months but is in a tight contest with Texas Sen. Ted Cruz for the support of Iowa Republicans, who lean conservative and whose evangelical Christians constitute a major voting bloc.

Palin, who often discusses her Christian faith, is popular among that group and endorsed Cruz when he ran for the U.S. Senate in 2012.

Her folksy, plain-speaking style has won her a loyal following among some conservatives, but she remains a polarizing figure, even among Republicans.

It is unclear whether she can attract additional support to Trump, whose own blunt rhetoric has helped lift him to the top of the crowded Republican field.

“He is from the private sector, not a politician,” Palin said in an animated speech after joining the business mogul and former host of TV’s “The Apprentice” onstage. “Can I get a hallelujah?”

She described Trump as an anti-establishment candidate who would “kick ISIS’ ass,” referring to the Islamic State militant group.

Palin said there was nothing wrong with Trump being a multibillionaire and that it did not make him an elitist, citing all the time he had spent with construction workers as a real-estate developer.

As Trump stood alongside, Palin said: “The status quo has got to go,” adding that the political establishment had been “wearing political correctness kind of like a suicide vest.”

In a statement before the event, Trump said he was “greatly honored” by the endorsement. “She is a friend, and a high-quality person whom I have great respect for.”

Cruz responded to Palin’s switch of allegiance with magnanimity.

She devoted a large portion of her speech to deflecting criticism from Cruz and others that Trump, who did not oppose legal abortion at least for a time, was not a true conservative.

Despite the Democratic victory, Palin‘s 2008 vice presidential run made her a national celebrity.

Suggesting there were no fiercer fighters for conservative values than a small-town “hockey mom,” the former beauty-pageant winner professed a love of hunting with guns and thought it more important that the United States increase drilling for oil than fret about climate change.

Since resigning her governorship in 2009, Palin has worked as a conservative political commentator and as the producer and star of lightly staged television shows about her large family enjoying Alaska’s rugged landscapes.

But even some former admirers have wondered if her moment had passed, particularly after a speech a year ago before conservative Iowa voters that at times was hard to transcribe and even harder to follow.

Joe Brettell, a Republican strategist in Texas, said he thought Palin would not help Trump much “beyond a jolt in the news cycle.”

The crowd in Ames listened to Palin warmly but was divided afterward as to how valuable she would be. June Heidn, 62, said Palin was “inspiring” and might help Trump appeal to female voters.

Mike Caruso, 40, said it did not help him as he weighs giving Trump his vote.

“I think he’s pretty solid without her,” he said.

News
In battleground states, American Jews prefer Biden over Trump by a wide margin
Opinion
Religious identity and Supreme Court justices — a brief history
News
Both candidates went to church this weekend. Their experiences were very different
Opinion
The 2020 election’s most crucial faith group is one you’ve never heard of
Opinion
Barrett hearings will play into Trump’s hopes to claim Catholic high ground
© Copyright 2020, Religion News Service. All rights reserved. Use of and/or registration on any portion of this site constitutes acceptance of our User Agreement and Privacy Policy, Privacy Statement and Cookie Notice. The material on this site may not be reproduced, distributed, transmitted, cached or otherwise used, except with the prior written permission of Religion News Service.