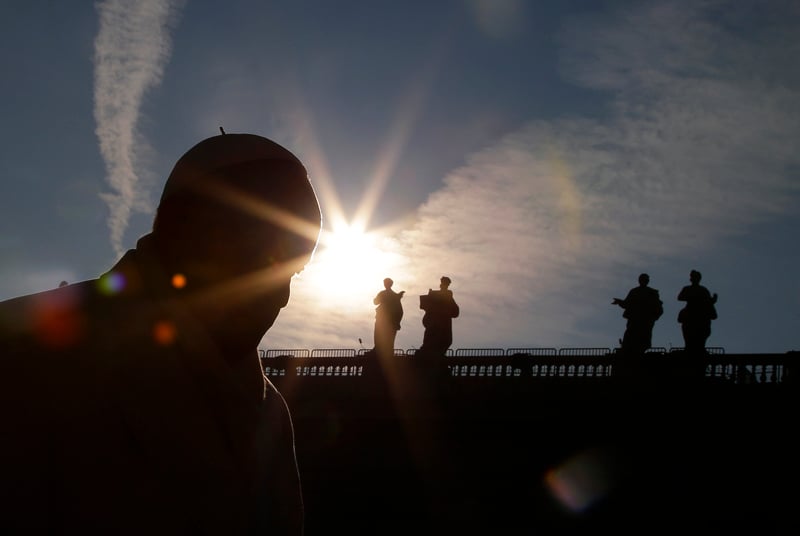 Pope Francis is silhouetted as he arrives to lead the weekly audience in St. Peter’s Square at the Vatican on Dec. 30, 2015. Photo courtesy of REUTERS/Max Rossi
*Editors: This photo may only be republished with RNS-POPE-LENT, originally transmitted on Jan. 26, 2016.

(RNS) Pope Francis is taking direct aim at the wealthy and powerful of the world, saying in his message for Lent that they are often “slaves to sin” who, if they ignore the poor, “will end up condemning themselves and plunging into the eternal abyss of solitude which is hell.”

“The greater their power and wealth, the more this blindness and deception can grow,” the pontiff wrote in his annual Lenten exhortation, which was released on Tuesday (Jan. 26).

Francis has made caring for the poor and denouncing social injustice a hallmark of his pontificate since his election in 2013. He has said he would like “a church that is poor and for the poor,” and he has called the “unfettered pursuit of money” the “dung of the devil.”

In this year’s message to the world’s 1.2 billion Catholics for the penitential season leading to Easter, he uses some of his most powerful language yet. He talks about the corrupting influence of money and power — while pointing out that caring for the poor, and not just praying for them, is the path to genuine conversion.

“The corporal and spiritual works of mercy must never be separated,” the pope writes. “By touching the flesh of the crucified Jesus in the suffering, sinners can receive the gift of realizing that they too are poor and in need.”

Too often, he says, “the real poor are revealed as those who refuse to see themselves as such. … This is because they are slaves to sin, which leads them to use wealth and power not for the service of God and others, but to stifle within their hearts the profound sense that they too are only poor beggars.”

The organizing principle of the Lenten message is mercy — just as it is the hallmark of this pontificate and the theme of the special Holy Year jubilee that Francis inaugurated last month.

RELATED STORY: What’s that Jubilee Year of Mercy the pope keeps talking about?

“For all of us, then, the season of Lent in this Jubilee Year is a favorable time to overcome our existential alienation by listening to God’s word and by practicing the works of mercy,” he writes.

“These works remind us that faith finds expression in concrete everyday actions meant to help our neighbors in body and spirit: by feeding, visiting, comforting and instructing them. On such things will we be judged.”

Lent begins on Ash Wednesday, which is Feb. 10 this year, and runs until Holy Week, which starts the observances leading up to Easter Sunday on March 27.

Lent echoes the 40 days that the Gospels say Jesus spent in the desert, enduring temptations by the devil before Jesus began the public ministry that would end in his crucifixion and, Christians believe, resurrection.