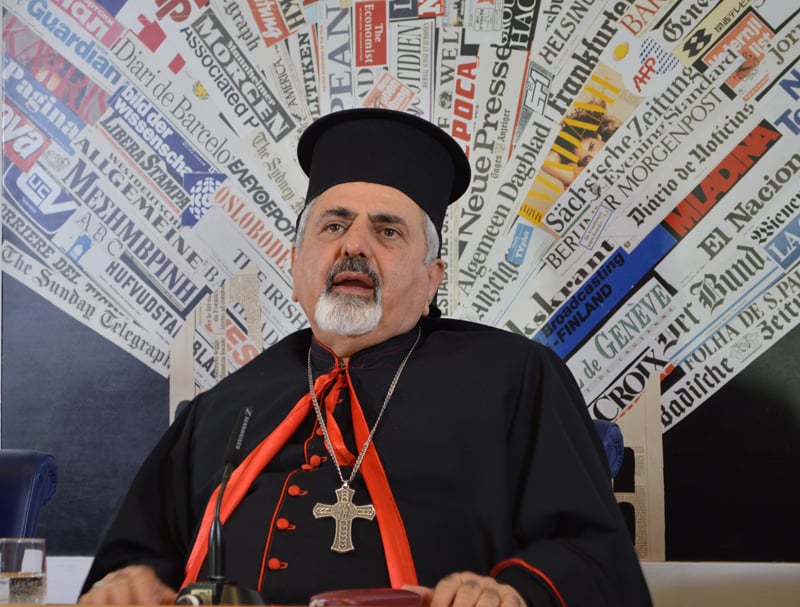 “This is our culture. If you don’t want to see it, close your eyes!” Patriarch Youssef told journalists in Rome on Jan. 28, 2016. Religion News Service photo by Rosie Scammell

ROME (RNS) Controversy over Italy’s decision to cover nude statues during the visit of Iran’s president continued to spark debate as the leader of the Syrian Catholic Church criticized the episode, saying it pains persecuted Christians in Syria who feel forgotten.

“This is our culture. If you don’t want to see it, close your eyes!” an exasperated Patriarch Youssef III Younan told journalists in Rome on Thursday (Jan. 28).

The head of the Syriac Catholic Church was speaking two days after ancient nude statues were covered by staff at Rome’s Capitoline Museums in a bid to avoid offending the Iranian president, Hassan Rouhani.

Rouhani was visiting Italy and France this week as part of a trip aimed at thawing Tehran’s relations with the West after the historic deal with the U.S. and other world powers that would limit Iran’s nuclear capabilities in return for ending many sanctions.

The Iranian president also met with Pope Francis in the Vatican on Tuesday.

The move by officials in Rome to cover the statues during Rouhani’s visit sparked an outcry in Italy and was viewed as a step too far to accommodate the leader of Shiite-majority Iran.

The Syrian patriarch’s criticism took on a religious and international dimension as he argued the decision by officials in heavily Catholic Italy troubled Christians trying to survive in war-torn Syria.

“This gives a lot of pain to us Christians who have remained … seeing our brothers, who are ready to forget everything for reasons of humanitarian interests, or opportunism,” he said during a talk in Rome about the persecution of Christians in the Middle East.

Rouhani, whose delegation to Rome signed business deals worth billions of dollars, has denied requesting the statues be covered.

Both Italy’s culture minister, Dario Franceschini, and Prime Minister Matteo Renzi claimed they were not informed of the decision, and an internal investigation has subsequently been launched.

During his private meeting with Francis, Rouhani and the pope discussed religious freedom in Iran and interreligious dialogue. Francis also pressed Rouhani to support political solutions in the Middle East and combat terrorism and arms trafficking.