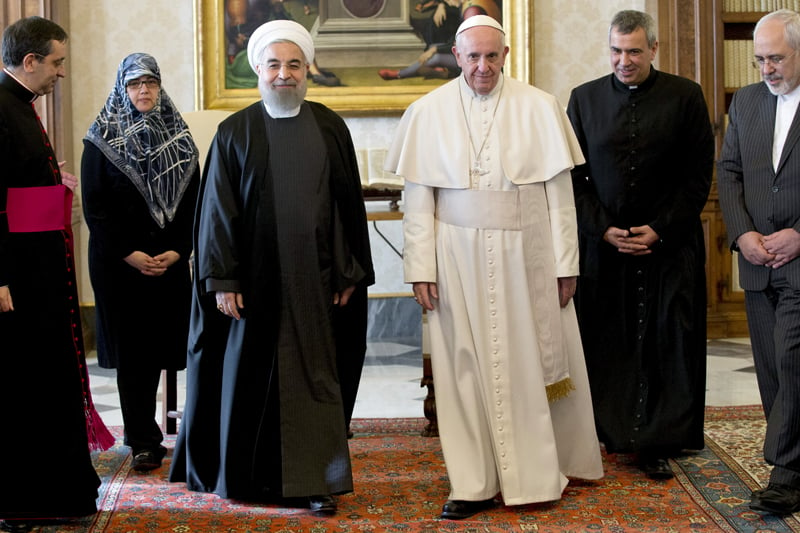 Iran President Hassan Rouhani walks with Pope Francis at the Vatican on Jan. 26, 2016. Photo courtesy of REUTERS/Andrew Medichini/Pool
*Editors: This photo may only be republished with RNS-POPE-ROUHANI, originally transmiteed on Jan. 26, 2016.

VATICAN CITY (RNS) Pope Francis and Iranian President Hassan Rouhani met for talks on Tuesday (Jan. 26) — the first such encounter since 1999 — in a private meeting in which the pontiff pressed Rouhani on fostering Middle East peace and countering terrorism and arms trafficking.

The 39-minute meeting in the apostolic palace also touched on the landmark deal on Iran’s nuclear capacity that has been praised by the pontiff, and the two leaders discussed the situation of the church in Iran and interreligious dialogue.

“I ask you to pray for me. It’s been a pleasure and I wish you well in your work,” Rouhani said at the end of their talks, addressing the pope in Farsi through a female translator.

“I thank you for this visit and I hope for peace,” Francis said in Italian, aided throughout the appointment by a Farsi-speaking translator.

In a statement issued after the meeting, the Vatican described the talks as “cordial” and said “common spiritual values emerged” in the discussions.

The Vatican said Francis and Rouhani discussed religious freedom and “the important role that Iran is called upon to fulfill, along with other countries in the region, to promote suitable political solutions to the problems afflicting the Middle East, (and) to counter the spread of terrorism and arms trafficking.”

The Vatican visit was a key stop on a four-day visit to Italy and France by Rouhani that had been postponed after the November terror attack in Paris. The tour is seen as part of the effort by Rouhani and Iranian moderates to revive relations with the West and open Iran to business opportunities.

Francis can help promote the “thaw in diplomatic relations between Iran and other countries,” much as he did with Cuba and the U.S., the Rev. Bernardo Cervellera, editor of the Rome-based Asia News, told The Wall Street Journal. “If we want peace in the Middle East, Iran and Iranian Islam have a vital role to play.”

Christians are a recognized religious minority and have certain rights, but they face strict limitations as well.

The release this month of an Iranian-American evangelical Christian pastor, Saeed Abedini, after more than three years in jail in Iran, allegedly for trying to set up house churches, underscored the religious freedom and human rights problems that have been flagged by the U.S. State Department. 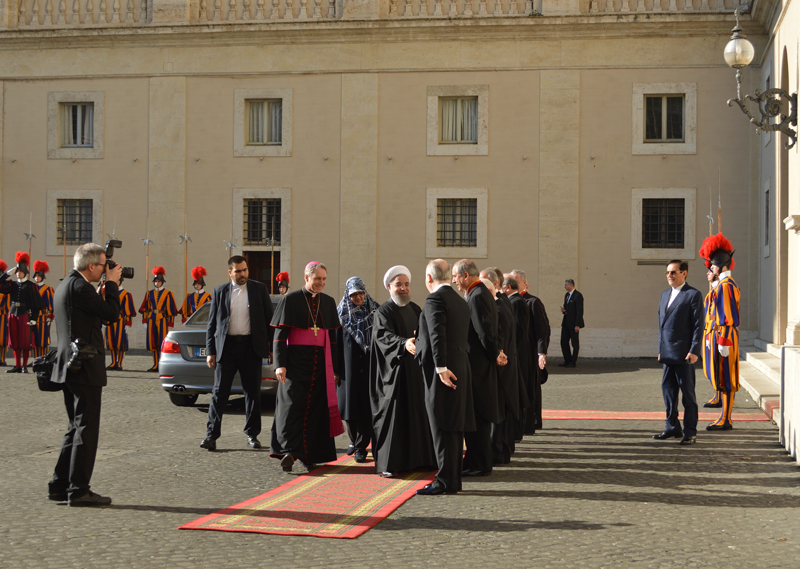 Rouhani was joined at the Vatican on Tuesday by his foreign minister, Mohammad Javad Zarif, along with two representatives from the Iranian Embassy to the Holy See. The Vatican’s secretary of state, Cardinal Pietro Parolin, and Foreign Minister Paul Gallagher were also present.

In an exchange of gifts, Francis presented his guest with a medallion of St. Martin of Tours, a fourth-century French bishop depicted giving his cloak to a beggar. The pope told Rouhani it was a symbol of brotherhood.

Francis also gave him an English-language copy of his landmark 2015 encyclical on the environment, “Laudato Si’.” Noting that the papal letter had not been translated into Farsi, the pontiff also offered Rouhani a copy in Arabic.

The president in turn gave his host a rug hand-woven in Qom, a Shiite holy city in Iran, and a large book by artist Mahmoud Farshchian.

Rouhani arrived at the Vatican late in the morning for the one-on-one with the pope, a day after arriving in the Italian capital for high-level diplomatic and business talks.

The impetus for the European tour was the historic agreement signed last year by Tehran and six world powers, including the U.S., that requires it to curtail its nuclear program in exchange for the lifting of economic sanctions.

Francis cited the deal as one of the key achievements of 2015 “which give solid hope for the future,” along with the Paris climate change deal.

“I think first of the so-called Iran nuclear deal, which I hope will contribute to creating a climate of détente in the region,” the pope told the Holy See diplomatic corps earlier this month.

The last encounter between a pope and an Iranian resident was in 1999, when St. John Paul II met with Mohammad Khatami. Some criticized the Vatican for that meeting, but this visit was less fraught and has been viewed as a boost for relations between Iran and the West and the landmark deal on the country’s nuclear capabilities.

Some observers took note of the fact that Italian officials covered up classical nude statues at the Capitoline Museums before Rouhani arrived, an embodiment of at least one remaining difference between Iranian Islam and Italian Catholicism.

Rouhani told Italian leaders that generating economic growth in the Middle East is crucial to defeating extremism, and he cast Iran as a pillar of stability and a regional trade hub.

The Iran delegation includes more than 100 officials and business leaders, who are expected to sign deals worth millions of dollars during their European tour. After their stay in Italy, the delegates will travel to France, where Rouhani is to meet French President Francois Hollande.