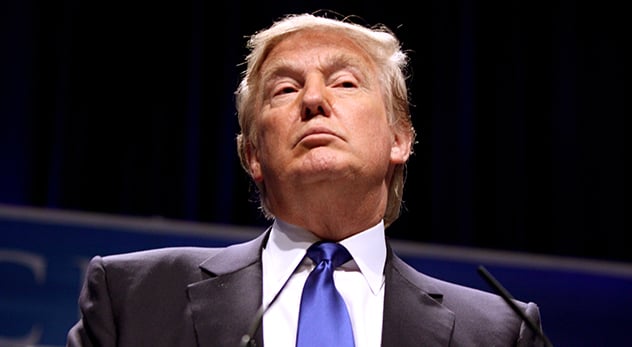 Do Christian voters like Donald Trump because he’s “kesnly?” And just what does that word mean anyway? – Photo credit: Gage Skidmore (http://bit.ly/1nRBAsW)

Many Christians like Donald Trump because he’s manly. That’s just my theory, of course, but it’s not totally unfounded. Certain sects of American Christianity–particularly conservative evangelicals and “New Calvinists“–are obsessed with strong, male leaders. Pastor John Piper even argues that “God has given Christianity a masculine feel,” an idea which might be traced back to early 20th Century evangelists. So when Trump brags about his business successes, makes politically incorrect statements, refuses to apologize, or releases a report from his doctor extolling his impeccable health, some Christians respect him more, not less. No wonder he is more liked among evangelicals than any other Republican candidate.

But a new breed of Christians have challenged some of these assumptions about what “masculinity” is. They are raising questions about whether the Bible defines that term and the concept of manhood in the same way we do. One such person is pastor Nate Pyle, author of “Man Enough: How Jesus Redefines Manhood.” In his book, he argues that some males may try to “appear superior to those around them, bolstering their bruised egos through racism, nationalism, sexism, and countless other -isms.” Remind you of anyone?

Here, Nate and I discuss whether some Christians like Trump more because he is “masculine” and how biblical changes the way we should understand that word.

RNS: You note that some sects of American Christianity have urged men to “man up” and “be the warriors God created them to be.” How did these views develop?

NP: There’s a lot of consternation about the feminization of the church. This is nothing new. In fact, people have been worried about this since before the 19th century. This anxiety led to the rise of people like Billy Sunday who promoted a Christianity centered around a bicep-bulging Jesus. [tweetable]”Muscular Christianity” has had a profound impact on how American Christians think about manhood.[/tweetable] Originating in Victorian England in the mid-19th century, muscular Christianity sought to rescue the church from the perceived feminization of the faith. The movement exhorted Christian men to train their bodies for the protection of the weak, the advancement of righteous causes, and the subduing of the earth.

While this impulse to engage men in the mission of God is great, the movement’s portrayals of Jesus were quickly caricatured into a hyper-masculine hammer-swinging carpenter, or an athlete who swung a bat for God, or even, as we can see with the rise of mixed martial arts groups in churches, a Tyler Durden-esque Jesus who would punch you in the face.

RNS: Do you think Donald Trump’s manliness is part of his appeal?

NP: Yes, for so many reasons. The most obvious is that Trump embodies American masculinity. He constantly boasts about his accomplishments to prove his manhood. He wants everyone to know that he has climbed the ladder, conquered all the ‘losers’ around him, and he unapologetically celebrates his success. Trump is the quintessential self-made man. But his appeal goes deeper than that. American men are increasingly anxious about their ability to prove their manhood through traditional means. Upward mobility, providing financially, feeling in control of one’s destiny have all been bastions of masculinity.

But that is changing – particularly for white men. While there is still much work to be done, the last few decades have seen much movement towards gender and racial equality. This is great for minorities and women, but for those who have long enjoyed the privilege of holding the best seats it feels like great loss. It feels like society is penalizing them for being male. Donald Trump with his promise to “make America great again” sounds like a move back to the good ‘ol days when men were men.

With Trump, men don’t have to learn how to navigate the new world. They don’t have to make room for others. They don’t have to live in fear of losing their job (long seen as the thing that makes a man a man) to an immigrant. Trump is selling nostalgia of a time when the American Dream was assumed for men. It’s this promise that I think makes him appealing to males.

RNS: How is biblical “manliness” different from modern American understandings?

NP: Currently, we are seeing a shift in masculinity in America. There is a growing acceptance of different kinds of men. While typical stereotypes of masculinity aren’t going anywhere, we are seeing an openness to the idea that men can look different than they have in the past. Thanks to Bill Gates, Steve Jobs and “The Big Bang Theory,” nerds are becoming an acceptable way to be a man.

These values are inverted in the Bible. Rather than climbing, conquering, and celebrating, followers of Jesus are called to descend, deny, and die. Biblical masculinity (and femininity for that matter) is defined by descending to become the last, denying one’s ambitions for Christ’s call, and dying to self. Men are not deemed worthy because they have proven themselves by ascending through the ranks. Rather, God deems us worthy in Jesus long before we’ve proven ourselves. [tweetable]Biblical manliness is not about what men do or what role they occupy.[/tweetable] True manliness means living out of our identity as sons of God that comes to us through Christ.

RNS: You say in your book that you didn’t feel like a man until you were 31. What went wrong?

NP: On one hand, nothing went wrong. That’s the problem. If there was a checklist for being a man, I checked all the boxes: graduate college, get married, get a job, buy a house, have a kid, be a loving husband and father. I projected an image of a confident, courageous leader who hunted and went backpacking. According to our culture, and according to the Christian sub-culture, by every account I qualified as a man.

But this reveals the problem. One can meet all the external requirements of “manhood” and still be left feeling like a fraud. “Man” is an elusive title that has to be earned, and then you have to continually prove you’re deserving of the title. It was this pressure to continually demonstrate my worthiness as a man that left me feeling inadequate. After all, aren’t men confident? And if I wasn’t confident that I was a man, that probably meant I wasn’t one. I was left feeling like there was still something I had to do, some experience I had to have, something that had to happen to make me a man.

RNS: Give us one or two of the most misused verses in the Bible on manliness.

First Timothy 5:8 comes to mind:  “Anyone who does not provide for their relatives, and especially for their own household, has denied the faith and is worse than an unbeliever.” This has become a prooftext for gender roles and a prescription for men to be breadwinners for their household. This reading denies the obvious context, which is about the care of widows by families, and the straightforward reference to “anyone.” Even John Calvin believed this passage carried greater weight if it applied to both men and women.

I might also list the “Fruit of the Spirit.” If we were to list out the fruit–love, joy, peace, forbearance, kindness, goodness, gentleness, self-control–and then label them as a masculine or feminine trait, most would label these as feminine. Forbearance and self-control might be the two that line up with most pictures of masculinity. Why is this? [tweetable]Our American ideals of masculinity impact our reading of scripture.[/tweetable] So we need to untangle ourselves from our preconceived conceptions and cultural ideals.

A good corrective might be 2 Corinthians 12:9. After the Apostle Paul pleads with God to remove something from his life that was tormenting him, God says to Paul, “My grace is sufficient for you, for my power is made perfect in weakness.” If we do not allow our men to be weak and vulnerable, then they will never know the perfect power of Christ in their lives. If men cannot vulnerable about their fears, then they will never be truly known. If they must always be the rock, then they have no need for Jesus. This is why we must exchange cultural stereotypes for a robust understanding of masculinity that is rooted in the person and work of Jesus.