Donald Trump was center stage among six rivals for the Republican presidential nomination during Fox Business Network’s GOP presidential debate Jan. 14, 2016. But he’s refusing to debate on Jan. 28. Photo courtesy of REUTERS/Randall Hill
*Editors: This photo may only be republished with RNS-DEBATE-PREVIEW, originally transmitted on Jan. 28, 2016.

(RNS) The run-up to the Feb. 1 Iowa caucus has shifted from who is toughest on ISIS or immigration or Obamacare to an all-out scramble to court evangelicals — an estimated 60 percent of Republican caucus likely voters.

However, a new report from the Public Religion Research Institute shows that evangelicals may be sharing their November election clout with a different voting bloc. PRRI found about one in four Iowans identify as evangelical but a similar percentage say they have no religious identity, the nones.

According to PRRI’s “American Value Atlas” update released Thursday (Jan. 28), white evangelical Protestants make up 26 percent of Iowa residents — the same as in 2007. But the percentage of nones has climbed to 24 percent from 15 percent in the same period. Losing shares:  White mainline Protestants (down to 22 percent from 27 percent) and white Catholics  (down to 16 percent from 21 percent.)

But even as evangelicals’ share of Iowa voters has not grown since 2007, they’re still the dominant force in the caucus: 42% of Iowa Republicans call themselves evangelicals, according to PRRI.

Any tactical shift to draw wider pool of caucus votes to GOP candidates will likely take second fiddle to the battle of Donald Trump vs. the rest of the field. As the contenders prepared for the Thursday (Jan. 28) debate on Fox News, Trump was still saying he would boycott the event.

His campaign cited disapproval of Fox News’ hosts, including Megyn Kelly. That bit of news followed earlier headlines that Trump, a nominal Presbyterian, picked up the endorsement of Jerry Falwell Jr., president of Liberty University, the mega-Christian-college founded by his father. 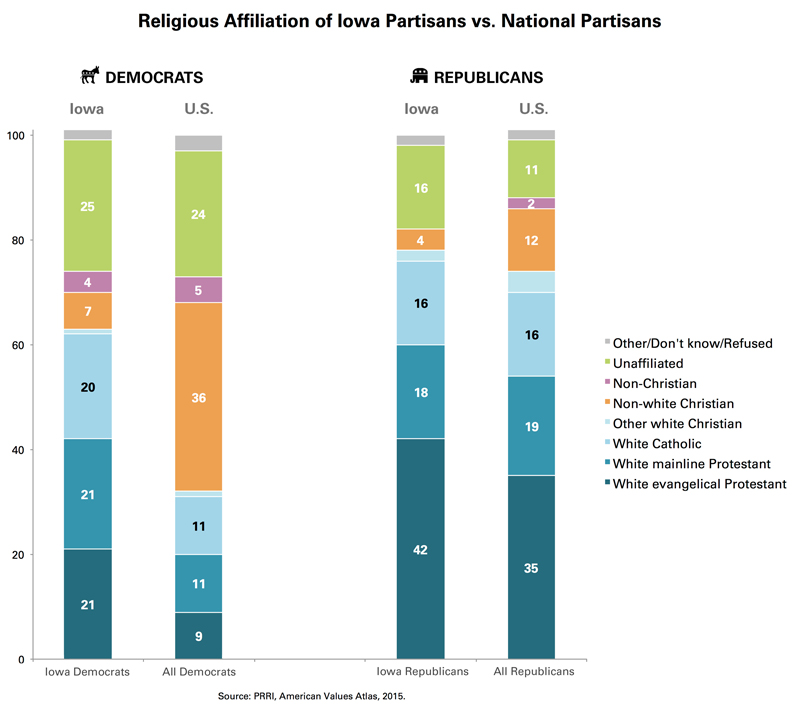 Falwell had lavish praise for Trump when the New York real estate mogul spoke to the university’s mandatory weekly convocation on Jan.18.

“In my opinion, Donald Trump lives a life of loving and helping others as Jesus taught in the great commandment,” Falwell said in his introduction.

Trump has continued to remind people he’s got religion. At recent campaign stops, the opening prayers have been led by outspoken Dallas pastor Robert Jeffress, a Southern Baptist, who has also given Trump his unofficial endorsement. On Sunday, Trump joined in worship at an Iowa Presbyterian church, where the sermon was on humility. He later joked about whether those words were intended for him.

Trump’s chief rival in Iowa, Texas Sen. Ted Cruz, is the son of a Baptist preacher. Cruz testifies to the power of his father’s conversion, attracting the attention of voters away from Ben Carson, who once counted believers as a major part of his base.

But Cruz has had bumpy sailing. Critics publicized tax records showing he tithed less than 1 percent of his income to church or charity. Cruz apologized on a Christian Broadcasting Network show, telling host David Brody, “I will readily admit that I have not been as faithful in this aspect of my walk as I should have been.”

RELATED STORY: Voters warm to candidates who are not religious

Rubio, who settled back into Catholicism after brushes with other faiths, hasn’t ceded the evangelical vote. He unleashed an ad about his faith and how he hopes others will find salvation in Christ. A few days later, he assured an atheist at a campaign event that people can “believe whatever you want.”

Surveys show several candidates might still make the debate’s main stage but they’d need more than prayers to compete for an Iowa win:

So far the contentious Republicans have held the lion’s share of the TV audience.

Their sixth debate drew 11 million viewers — Fox Business News’ second-highest ratings ever, behind only the first Republican debate in August. Even so, it was “the smallest audience to tune in for a GOP debate in this election cycle,” according to TVbytheNumbers.