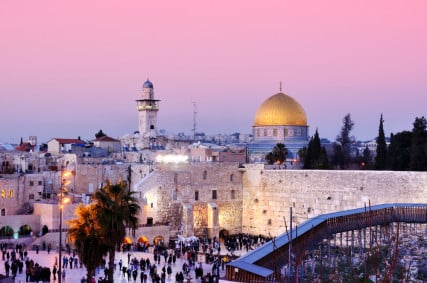 There should be a new Jewish holiday.

The Israeli government has decreed that a section of the Western Wall in Jerusalem must be set aside for egalitarian prayer. They have essentially created a new, ancient synagogue in Jerusalem — this time, for non-Orthodox Jews and for all those who want to be able to pray with men and women together.

It is the last physical remnant of the ancient Temple in Jerusalem — the retaining wall that supported the Temple Mount.

Over time, the Wall has become an ultra-Orthodox synagogue — with separate (and by no means equal) prayer spaces for men and women.

The Wall has become a very popular place for boys to celebrate becoming bar mitzvah (and not bat mitzvah for girls). But remember — the sexes must pray separately. That means that Mom, Grandma, and Aunt Debbie are standing on chairs on the women’s side in order to see Jeremy chant his Torah portion.

Women have not been allowed to chant Torah there. This has led to the activism of Women of the Wall, led by the indefatigable Anat Hoffman. who have been fighting for gender equality in that holy place.

Yes — literally, fighting. There have been outbreaks of violence against these brave women and their supporters.

The new egalitarian prayer area is to the south of the “real” Western Wall prayer area. (These maps will help you visualize the area).

If you ask me, it is still “the wall.” Frankly, I have always liked praying even further south — at the southern wall — because the view of the ancient city of David (today, the village of Silwan) is simply breathtaking.

I never fail to visit the Wall when I go to Jerusalem. But my relationship with that place is, like many relationships, complicated.

First: I identify with non-Orthodox Judaism. So, the Wall represents a Jewish world view — ultra-Orthodoxy — that doesn’t have room for me within it. I say this with sadness, not with anger.

Second: As a non-Orthodox Jew, I do not pray for the restoration of the ancient Temple in Jerusalem. I have no great desire to see animals sacrificed again.

So, what’s in the Wall for me — and for most modern Jews?

There is one last thing that the Wall can now represent to Jews — and to people of faith, everywhere.

Compromise. As you can imagine, some Orthodox groups are not happy about this new arrangement.

Neither are some non-Orthodox Jews. They might even feel that it is a sell-out, that we should have held out for turning the entire Western Wall into an egalitarian synagogue.

But, let’s understand what happened.  The ultra-Orthodox have the “usual” Wall; the non-Orthodox now have a piece of the wall that is just a little bit farther south.

The Wall was, ahem, partitioned.

I am thinking about an earlier partition plan. It happened in 1947, when the UN partitioned the land of Israel nto a Jewish state and an Arab state.

The maximalists on the Jewish side hated the idea of partition.

So did the Arabs. They rejected it, launched a war against the nascent Jewish state — and that was how they lost what should have been the state of Palestine.

David Ben Gurion was willing to settle for far less than all of Israel. As the Talmud says: you can say a blessing over as little as an egg or an olive. It doesn’t have to be a full meal.

You know what just happened?

The Israeli government just created a new, holy space. Actually, it expanded the holiness of the Western Wall.

Let’s say a blessing over what we got.

The work is by no means over.

Non-Orthodox Jews still have to struggle for equal acceptance in israel; for their institutions to get appropriate government funding; for their rabbis to be able to perform weddings and conversions.

But maybe, just maybe, the “wall” that separates today from that goal just got a little bit lower.