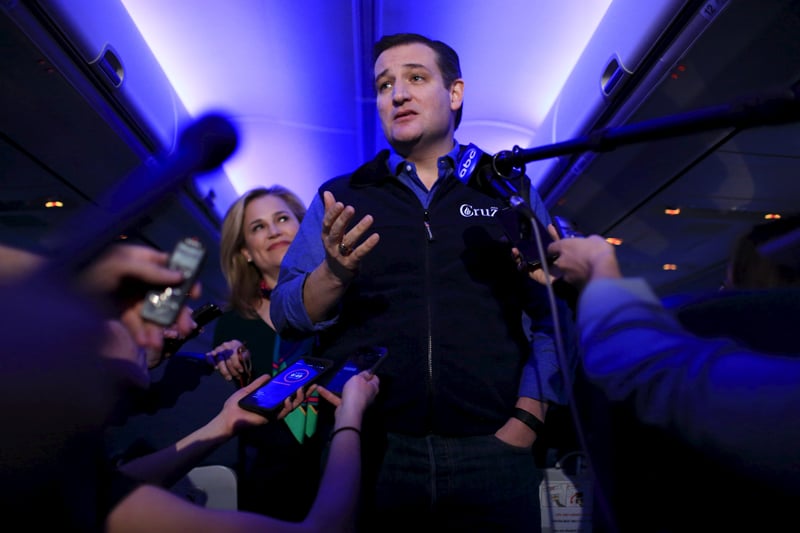 Republican presidential candidate Ted Cruz and his wife, Heidi, speak to the press aboard a plane en route to a campaign event in Piedmont, S.C., on Feb. 2, 2016. Photo courtesy of REUTERS/Eric Thayer
*Editors: This photo may only be republished with RNS-FEA-COLUMN, originally transmitted on Feb. 4, 2016.

(RNS) Now that Ted Cruz has an Iowa victory under his belt, it is time to take a deeper look at his Christian approach to politics. What is his real vision for America? Cruz likes to talk about “taking back” or “reclaiming” the United States. What does he mean by this?

Many Americans — Christian or otherwise — may find the answers to these questions disturbing.

Cruz’s shoe leather campaign in Iowa targeted the state’s large number of evangelical Christians. But not all evangelicals are the same.

Donald Trump appeals mostly to those connected with the Christian prosperity movement, a form of evangelicalism that celebrates the accumulation of wealth as a sign of God’s blessing.

Marco Rubio appeals to suburban, educated, middle- and upper-middle-class evangelicals. These evangelicals normally avoid the Pentecostal prayer meetings of the prosperity crowd and change the channel when televangelists show up on their big screens.

Cruz resonates with the evangelical culture warriors. He mixes what New York Times columnist David Brooks describes as political “brutalism” with a belief that he is engaged in a fight with the devil for the soul of the nation. It is only a matter of time before Cruz assumes the role of the Old Testament prophet Elijah and tries to cast down fire from heaven to destroy the “prophets of Baal” who oppose his campaign.

When Cruz says he wants to “reclaim” or “restore” America, he does not only have the Obama administration in mind. This agenda takes him much deeper into the American past. Cruz wants to “restore” the United States to what he believes is its original identity: a Christian nation.

But before he can bring the country back to its Christian roots, Cruz needs to prove that Christian ideals were indeed important to the American founding. That is why he has David Barton on his side.

For several decades Barton has been a GOP activist with a political mission to make the United States a Christian nation again. He runs “Keep the Promise,” a multimillion-dollar Cruz super-PAC.  He’s one of Cruz’s most trusted advisers.

Barton is the founder and president of WallBuilders, a Christian ministry based in his hometown of Aledo, Texas. He writes books and hosts radio and television shows designed to convince evangelicals and anyone else who will listen that America was once a Christian nation and needs to be one again.

But his work on the history of the American founding has been discredited by historians, many of whom are his fellow evangelicals. This does not seem to stop him. His 2012 book, “The Jefferson Lies: Exposing the Myths You’ve Always Believed About Thomas Jefferson,” was roundly condemned for its historical inaccuracies and its attempt to turn the third president of the United States into a member of the 20th-century Christian right.

Thomas Nelson, the book’s publisher, pulled it from print. Through it all, Barton defended his portrayal of Jefferson. Earlier this year, the right-wing website World Net Daily republished the book, claiming that Thomas Nelson bowed to the gods of political correctness when it decided to stop publication.

Barton’s work is an important part of Cruz’s larger theological and political campaign to take back America. If Barton can prove that the United States was once a Christian republic, then Cruz will have the historical argument he needs to sustain his narrative of American decline.

Cruz wants Americans to believe the country has fallen away from its spiritual founding and he, with God’s help, is the man who can bring it back.

READ: Ted Cruz, you might want to listen to evangelicals on climate change (COMMENTARY)

Anyone who has watched Cruz on the stump knows that he often references the important role that his father, traveling evangelist Rafael Cruz, has played in his life. During a 2012 sermon at New Beginnings Church in Bedford, Texas, Rafael Cruz described his son’s political campaign as a direct fulfillment of biblical prophecy.

The elder Cruz told the congregation that God would anoint Christian “kings” to preside over an “end-time transfer of wealth” from the wicked to the righteous. After this sermon, Larry Huch, the pastor of New Beginnings, claimed Cruz’s recent election to the U.S. Senate was a sign that he was one of these kings.

According to his father and Huch, Ted Cruz is anointed by God to help Christians in their effort to “go to the marketplace and occupy the land … and take dominion” over it.  This “end-time transfer of wealth” will relieve Christians of all financial woes, allowing true believers to ascend to a position of political and cultural power in which they can build a Christian civilization. When this Christian nation is in place (or back in place), Jesus will return.

Rafael Cruz and Larry Huch preach a brand of evangelical theology called Seven Mountains Dominionism. They believe Christians must take dominion over seven aspects of culture:  family, religion, education, media, entertainment, business and government. The name of the movement comes from Isaiah 2:2: “Now it shall come to pass in the latter days that the Lord’s house shall be established on the top of the mountains.”

Barton’s Christian nationalism is a product of this theological approach to culture.  Back in 2011, Barton said that if Christians were going to successfully “take the culture” they would need to control these seven areas. “If you can have those seven areas,” Barton told his listeners to his radio show, “you can shape and control whatever takes place in nations, continents and even the world.”

Seven Mountains Dominionism is the spiritual fuel that motors Cruz’s campaign for president.

READ: Panthers or Broncos? God does not care

Cruz wants to defund Planned Parenthood because it threatens the traditional Christian understanding of the family, one of the seven “mountains.”

When Cruz talks about the Free Exercise Clause of the First Amendment, he almost always discusses it in the context of persecution against Christians, such as Kentucky county clerk Kim Davis.

He is not interested in crafting new models of American pluralism to respond to the country’s ever-growing religious diversity. Rather, religious liberty is a code word for defending the right of Christians to continue to hold cultural authority and privilege. 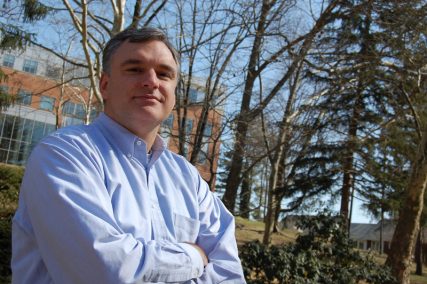 John Fea teaches American history at Messiah College. He is the author of “Was America Founded as a Christian Nation? A Historical Introduction” and most recently “The Bible Cause: A History of the American Bible Society.” Photo courtesy of Messiah College.

Cruz’s constant complaints about the liberal media also reflect this dominionist battle. The media are controlled by the forces of evil. The media must be taken over by Christians.

Cruz’s approach to politics is inseparable from this theology. His goal is to lead a Christian occupation of the culture and then wait for the Second Coming of Christ.

He’s also a good politician. He knows the theological affirmations of his father, Barton or Huch might be too much for some Americans to swallow. He does not use the terms “dominionism” or “seven mountains” when he is campaigning. But it is also worth noting that he has never publicly rejected these beliefs.

Cruz’s campaign may be less about the White House and more about the white horses that will usher in the God’s Kingdom in the New Testament book of Revelation, Chapter 19.

(John Fea teaches American history at Messiah College in Mechanicsburg, Pa. He is the author of “Was America Founded as a Christian Nation? A Historical Introduction” and most recently “The Bible Cause: A History of the American Bible Society”)