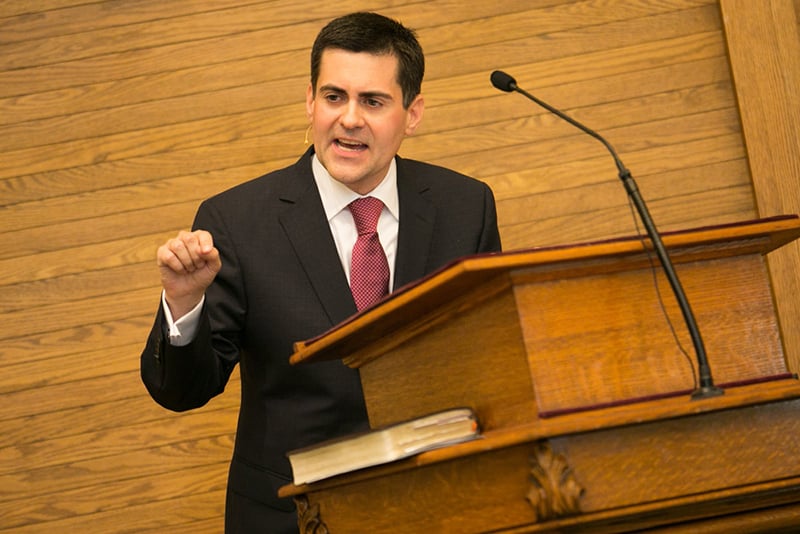 (RNS) When Russell Moore was appointed president of the Ethics and Religious Liberty Commission, the political arm of the Southern Baptist Convention, it seemed like a perfect marriage. But according to Will Hall, editor of the Baptist Message, Louisiana Baptists’ state newspaper, the honeymoon may be over.

Hall penned an editorial last week raising questions about whether Moore really speaks for Southern Baptists. He argues that Moore has snubbed his fellow Southern Baptists and taken “troubling” stances on a number of key issues. And, according to Hall, Moore expresses “disrespect and even contempt for any Christian” who disagrees with him.

As with most marriages, the health of the relationship is more complicated than some might assume. There is no mutiny among the masses, but not every Southern Baptist is a card-carrying member of the Russell Moore fan club, either.

When Moore was appointed in 2013, the denomination was in desperate need of a makeover. Moore’s predecessor, Richard Land, spent years establishing himself as a key leader of the so-called religious right. But a new generation of believers was questioning whether the religious right had become little more than a bombastic mouthpiece for the Republican Party.

READ: Ted Cruz, you might want to listen to evangelicals on climate change (COMMENTARY)

After the death of Trayvon Martin ignited racial tensions across America in 2012, Land incited controversy by calling African-American leaders such as Jesse Jackson and Al Sharpton “race mongers” and “racial ambulance chasers,” and said seeing young black men as threatening is “understandable” since they are “statistically more likely to do you harm than a white man.” Though Land later apologized, the denomination nixed his radio program and he ultimately resigned.

The fresh-faced, 41-year-old Moore was picked to revamp the tarnished Southern Baptist brand. Moore had asserted himself as a capable voice of conservative reason from his post as dean of theology at Southern Baptist Theological Seminary. He had authored several popular books and had handled himself well in numerous interviews. The announcement of his appointment was accompanied by a press kit containing 17 pages of endorsements from Baptist leaders across America.

Moore had barely settled into his new office before he — in the words of an ERLC staffer — “completely rebranded the organization.” A sleek website with a new logo was released and a broad range of initiatives and conferences were planned. Many in the media took note and began seeking out Moore to shed light on the current state of American evangelicalism.

As president of the ERLC, he has refused to budge on cornerstone conservative positions such as opposition to gay marriage and abortion, but his approach is noticeably different from that of his predecessor. His rhetoric is more winsome, his positions are more nuanced, and his statements are often laced with pop-culture references.

But Moore has also taken surprising positions on other issues, even placing himself at odds with some of his fellow conservatives. To wit:

According to Hall, Moore may be overstepping his bounds. And Hall isn’t the only one. An article posted by the Christian Examiner cited criticism of Moore by Alabama pastor Rick Patrick and Tennessee pastor Ken Skelton. Other bloggers, such as Montana pastor J.D. Hall and Peter Lumpkins, have also posted criticisms of Moore. (A spokesperson from the ERLC declined to comment.)

READ: Panthers or Broncos? God does not care

The SBC is a voluntary gathering of autonomous congregations. As such, no single person can claim to speak for every Southern Baptist. On any given issue, Southern Baptists express a range of opinions and positions.

Furthermore, the denomination has been called “the battling Baptists” for good reason. Southern Baptists like to fight among themselves — a lot. So no matter who sits atop the ERLC, one can always expect some level of dissent.

I’ve been around Southern Baptists long enough to know controversy when I see it. This is not one. It would be more unusual if Southern Baptists weren’t griping. While the digital age allows both bloggers and Pulitzer Prize-winning writers to post their views online, not every opinion writer is equally influential. Don’t confuse the gripes of crazy Uncle Carl with a family feud.

I have disagreed with Moore on several occasions, but it’s difficult to deny that he has improved the Southern Baptist brand. Under his leadership, the denomination has embraced a broader public agenda while becoming less partisan. Some old-school Baptists might not like Moore’s sophisticated approach because it sometimes sounds conciliatory to more liberal causes. But most Baptists — especially younger ones — don’t want their denomination’s political arm run by a sycophant happy to settle for the status quo. And that’s why most Southern Baptists still want more of Moore.

(Jonathan Merritt is a senior columnist for RNS)