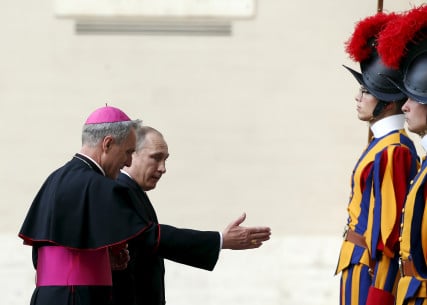 Russian President Vladimir Putin is welcomed by Archbishop Georg Ganswein as he arrives for a private audience with Pope Francis in Vatican City on June 10, 2015. Photo courtesy of REUTERS/Alessandro Bianchi
*Editors: This photo may only be republished with RNS-PUTIN-VATICAN, originally transmitted on June 11, 2015.

VATICAN CITY/MOSCOW (Reuters) A meeting between Pope Francis and Russia’s Orthodox Patriarch Kirill on Friday (Feb. 12) could not happen without a green light from President Vladimir Putin, diplomats and analysts say, and he may be one the beneficiaries.

In a landmark step toward healing the 1,000-year-old rift between the Western and Eastern branches of Christianity, the two religious leaders will meet in Havana on the pope’s way to Mexico.

“There is no doubt the Kremlin took part in making this decision,” said Gleb Pavlovsky, a political analyst and former Kremlin adviser in Moscow. “Otherwise the meeting would not have happened.”

Putin has aligned himself closely with the Russian Orthodox Church, making Friday’s two-hour private meeting not just a religious event but politically charged as well, especially when Russia is at odds with the West over Ukraine and Syria.

“He understands the pope is a big player on the world stage and I think that he would be happy about having the possibility of using the improved relations between the Vatican and the ROC to get the Kremlin’s view across to the Vatican,” he said.

Alexander Volkov, Russian church spokesman, said that while a joint declaration will dwell on the Middle East’s persecuted Christians, tensions between Russia and the West may be brought up in the talks.

“This is one of the burning issues and we can assume it will be reflected in the dialogue. It can’t be ruled out,” he said.

Relations between Moscow and the Vatican have improved steadily since the reign of Pope John Paul II, a Pole who had an inbred suspicion of Russia and who died in 2005. But Francis is an Argentinian with no historical baggage associated with the East-West divisions of Europe after World War II.

In 2013, Moscow was pleased after Francis opposed a proposed U.S.-led military intervention in Syria, a key Russian ally.

Last year, Catholics in Ukraine accused Francis of being soft with Moscow when he described violence in Eastern Ukraine as “fratricidal.” They saw it as a product of foreign aggression.

One commentator said Francis’ view was perhaps “blurred by ecumenical correctness” in the hopes of a meeting with Kirill.

In an interview with Reuters, Cardinal Kurt Koch, head of the Vatican office for Christian unity, was noncommittal when asked if the meeting could help Putin. “I think Putin agrees with the meeting, but I can’t say more,” he said.

Russia’s ambassador to the Vatican, Alexander Avdeyev, said the two churches organized the meeting but that it could “help politicians and diplomats” with policy decisions.

“The two churches clearly understood that all threats and challenges in the world threaten both of them and cooperation has to be stepped up to fight nationalism and terrorism,” he told Reuters.

The meeting, which will put another historic notch on Francis’ legacy, came after two years of secret contacts in Rome, Moscow and Havana, Vatican and diplomatic sources said.

Agreement was clinched last autumn, but the ROC wanted to keep it under wraps for several more months, one Vatican source said.

The Russian Church had long accused Catholics of trying to convert people from Orthodoxy after the breakup of the Soviet Union in the early 1990s. The Vatican denied the charges, and both sides say that issue has largely been resolved.

The meeting was brokered by Cuban President Raul Castro, who hosted the pope in Cuba last year. The Vatican helped arrange the rapprochement between Cuba and the United States.