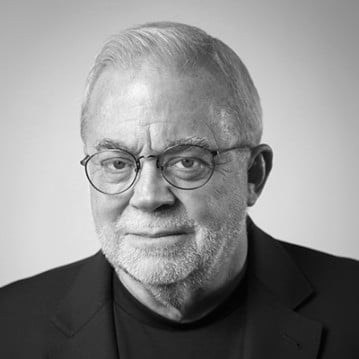 Half a century ago, a teenaged Jim Wallis decided to confront the rampant racism in his hometown of Detroit, Michigan. As a white man, he decided to enter the city and take jobs alongside black workers, and he began speaking out about the racial barriers present at all levels in Detroit. The decision angered many within his white community and even pushed him away from his church. The negative reactions of Wallis’ peers did not deter him, and today, he continues his fight for racial justice.

Wallis founded Sojourners, an evangelical advocacy organization that publishes a magazine reaching a readership of more than a quarter-million. In 2014, he was among 20 faith leaders arrested in Ferguson, Missouri during a march protesting the unfair treatment of black Americans by law enforcement. And now Wallis has released his manifesto on the matter, America’s Original Sin: Racism, White Privilege, and the Bridge to a New America, a New York Times bestseller in which Wallis does not mince words.

While he has been maligned by many conservative Christians as a leftist and proponent of the “social gospel,” Wallis claims he is neither right nor left and believes in the gospel as Jesus taught and modeled it. Here we discuss his relentless war on racism and why he’s relentlessly waging it.

RNS: You talk about racism as “sin.” Most Christians I know–conservative, liberal, white, black, brown–would agree. How is your approach different?

JW: The biblical response to sin is repentance. But the meaning of that word is not just feeling or saying you’re sorry. Repentance means to turn around and go in a whole new direction. We really haven’t done that, including in our churches. That involves changing the racial geography of our lives when 75 percent of white Americans have no significant black relationships in their social circles. It means listening to and believing the stories of our black and brown brothers and sisters. It means being more intentional about making our congregations more diverse. And it will require the changing of systems and structures that still operate with the sins of racism and understanding how these sins are not only past but present.

RNS: You talk about race as the problem in America rather than a problem. Why do you elevate it to such a level, and how do you think this will solve the problem?

JW: Our original sin of racism is still the chief contradiction of the American life–and of the gospel in our country. When privilege and punishment are the results of skin color, our stated values and culturally captive religion are revealed as our greatest hypocrisies. And the marginalization of people of color in our society, including millions of children who remain our poorest in the world’s richest nation, would still make the biblical prophets scream. A young man in Ferguson said to me, “They always ask us protestors what we want. I just want an education, a job, and a family.” That’s what my kids want, and most parents want for their children. But when black parents still fear when their children walk out of the house and don’t believe they will have the opportunities in society that white children have, we have a fundamental moral and social contradiction; and only prioritizing this problem will solve it.

RNS: Do you support the paying of reparations for black Americans–yes or no?

JW: Isaiah 58 instructs us to be the “repairers of the breach” and “restorers of streets to live in.” We should lift that biblical language of “repairing” into the conversation about “reparations.” The terrible breach of racism in America must be repaired and healed. We can’t just be sorry about what has happened and still does; we have to fix and heal the continuing racial inequities. So we should have a national conversation about what that could mean—specifically.

Bryan Stevenson says “Slavery never ended, it just evolved” as it certainly has into radically disproportional mass incarceration. So reparations would certainly involve repairing our racialized and broken criminal justice systems, and the incredible racial disparities in our educational and economic systems.  The security and wealth gaps between white and black families were never accidental, they were the intentional consequence of practices and policies that directly benefited white people. So what practices and policies would begin to correct those flagrant injustices? That is a conversation we urgently need to have.

RNS: You talk about how white Christians can take the lead on changing “racial geography.” But do we really need white Christians to keep “taking the lead?” Isn’t it better to empower the minority voices among us to lead?

JW: That new generation of black activists and black pastors are already taking the lead in transforming attitudes and systems. And what those leaders tell me is that they don’t just need “allies” but are seeking “accomplices.” White Christians are responsible for changing our own racial geography, for challenging the continuing racial sins in our own white privilege, communities, workplaces, schools, and congregations. White people need to “stand down” from always expecting to lead in society, but also to stand up and speak out against racism in the white community and churches. Perhaps the most important thing is to make spaces for voices of color, especially new and young voices, in the places where we have influence.

READ: “Jim Wallis on gay marriage and the common good”

JW: When the audience at Intervarsity — large, young, international, and very multi-cultural — heard Michelle Higgins speak the truth about race in America and preach a biblical response to it, they rose to their feet with applause. It was like an altar call. But organizationally, Intervarsity still lives in the white evangelical world, with constituents and donors who have a negative response to honest and gospel talk about racism in America. This will be a very important and revealing case — whether an evangelical group like Intervarsity can move out of their white cultural context and support a new generation that wants to embrace diversity as a gift from God.

Of course, I support the movement. The compelling language of “black lives matter” strikes to the heart of America’s Original Sin—which said at the founding of our nation that black lives and bodies matter less than white lives and bodies. That foundational sin is what white American Christians used to justify the cruelty of our most venal kind of slavery—which claimed that kidnapped African slaves were less than human. We decided to discard imago dei, the image of God, in our slaves for the sake of our greed–because our faith was incompatible with making other human beings into chattel property. Now a new generation of black activists is challenging that sin directly, starting with how it manifests itself in racialized policing and a criminal justice system that treats the lives of young black men starkly differently than it treats my two white sons.

RNS: Many white conservatives say that current conversations on race fail to protect police, who are doing difficult and tricky jobs. How do you respond?

JW: Blue lives matter too, and many of us have said that. Especially in the face of imposed poverty and resulting despair, containing the results of injustice is a difficult and complicated job. But virtually every black family in America—of all income levels–can tell their stories about mistreatment by police and that should matter to all of us. The culture of policing needs to be changed and our criminal justice systems need to be dramatically reformed. The good news is that these issues have now been brought to the surface of public debate, and practical solutions are now on the table. Trust between law enforcement and communities of color must and can be established. And community policing can be done in ways that everyone benefits from. The fundamental policing paradigm shift we need is from “Warriors” to “Guardians” which would restore the proper vocation of police to a critically needed and positive role in their communities.