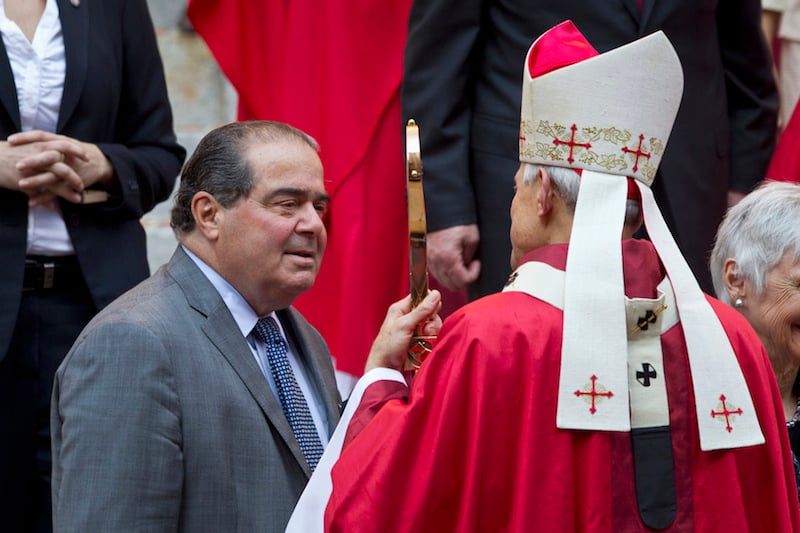 Supreme Court Justice Antonin Scalia talks with Cardinal Donald Wuerl, archbishop of Washington, at the conclusion of the annual Red Mass held at the Cathedral of St. Matthew the Apostle in Washington, on Sept. 30, 2012. Photo courtesy of REUTERS/Benjamin Myers
*Editors: This photo may only be republished with RNS-MILLER-COLUMN, originally transmitted on Feb. 18, 2016.

(RNS) Much has been said about Supreme Court Justice Antonin Scalia in light of his death over the weekend, including his deep Catholic faith. What does it really mean to live out one’s life as a Catholic in the public eye?

This week I thought of Pope Francis’ speech to Congress this past fall, when he lifted up the stories of four Americans, two of whom were Catholic. Was Justice Scalia a faithful Catholic voice in the political sphere? What does a life of faith and good works entail? As I explored these questions I took a closer look at some of Justice Scalia’s positions that are important to the Catholic Church in light of the U.S. Conference of Catholic Bishops’ voting guide “Forming Consciences for Faithful Citizenship.” The bench of the late Supreme Court Justice Antonin Scalia is seen draped with black wool crepe in memoriam inside the Supreme Court on Feb. 16, 2016. Photo courtesy of REUTERS/Carlos Barria
*Editors: This photo may only be republished with RNS-MILLER-COLUMN, originally transmitted on Feb. 18, 2016.

Justice Scalia’s view on abortion was well-known: He was fundamentally against it, as is the Catholic Church, which calls abortion an “intrinsic evil” in its Faithful Citizenship document. But Faithful Citizenship also states that other life issues, among them war and torture, can “never be justified.” Antonin Scalia was a proponent of torture, stating that those who are against it are merely being “self-righteous.” As the United States’ use of torture has been during wartime, one might wonder what Justice Scalia’s thoughts were on war and peace as well.

Faithful Citizenship listed racism as another issue that can never be justified, and yet Justice Scalia made headlines at the end of 2015 when he made troubling and racially tinged comments about African-American students, stating that:

“There are those who contend that it does not benefit African-Americans to get them into the University of Texas, where they do not do well, as opposed to having them go to a less-advanced school, a slower-track school where they do well.”

“One of the briefs pointed out that most of the black scientists in this country don’t come from schools like the University of Texas. They come from lesser schools where they do not feel that they’re being pushed ahead in classes that are too fast for them.”

One wonders who exactly the “they” are that Justice Scalia is referring to in his statement who claim that African-American students would benefit from going to a school that isn’t “too fast.”

Another issue where Justice Scalia differed from the institutional church was capital punishment. In “Evangelium Vitae,” or “The Gospel of Life,” Pope John Paul II stated that capital punishment should only occur under the most extreme circumstances, and that due to modern conditions today, it would probably not be acceptable under any circumstance. Justice Scalia, on the other hand, once said at an event at the Pew Research Center that “You want to have a fair death penalty? You kill; you die. That’s fair.”

It’s certainly true that in today’s political world, with issues that put people into right or left boxes, no Catholic would have a true political home if one were to weigh all of the issues, especially with the issues that are most important to the Catholic Church.

As someone who works in faith-based advocacy, I often struggle with how to most effectively be a Catholic voice in all aspects of my life, and to speak to issues in a way that is authentically Catholic, from abortion and capital punishment to war and torture, to racism and helping the poor and marginalized. 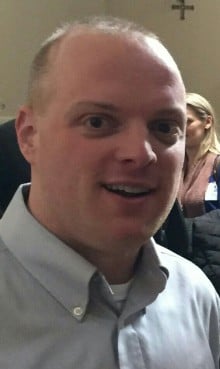 Jason L. Miller is director of campaigns and development at the Franciscan Action Network. Photo courtesy of Jason Miller

The four Americans Francis mentioned to Congress bridged political divides and often defied being put into boxes: Abraham Lincoln, Dr. Martin Luther King Jr., Dorothy Day and Thomas Merton. As I reflect on how to best live out my faith in the public sphere, I must follow the example of the pope and the Americans he mentioned and try to bridge political divides and resist being put into one political box or another. And while I respect the intelligence and Catholic faith of Justice Scalia, I will be wary of anyone who lifts up his voice as authentically Catholic.

(Jason L. Miller is director of campaigns and development at the Franciscan Action Network)