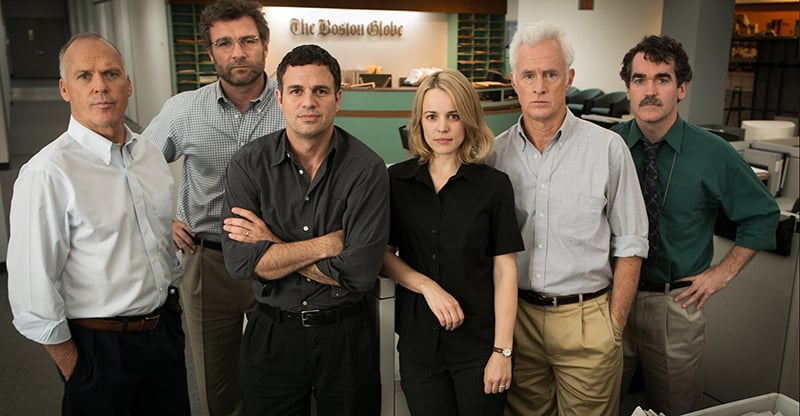 The cast of “Spotlight.” Photo courtesy of Open Road Films

It is just a single line of dialogue from Spotlight, up for Best Picture and five other Academy Awards this Sunday (Feb. 28), but it could be a movie in itself. It’s an allusion to an entire unknown chapter in the history of the Catholic Church sex abuse scandals: the role of National Catholic Reporter in first uncovering the clerical conspiracy to shield abusing priests.

“Have you read Jason Berry’s book? He wrote about the Gauthe case,” an abuse survivor asks the team of investigative reporters featured in the film.

The survivor, Phil Saviano as portrayed by Neal Huff, holds up a copy of Berry’s 1992 book, “Lead Us Not Into Temptation: Catholic Priests and the Sexual Abuse of Children,” which expanded on Berry’s reporting for the Times of Acadiana in partnership with NCR. 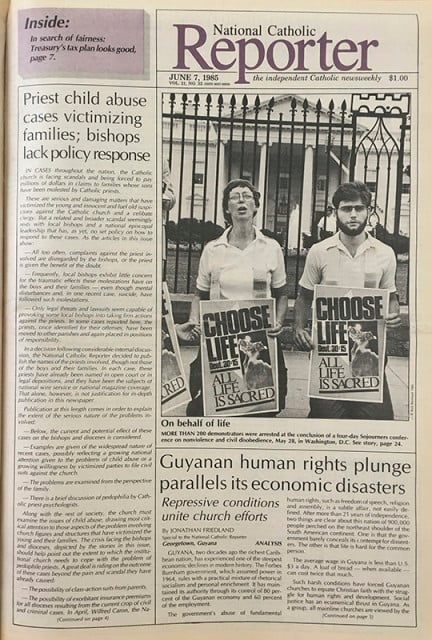 The June 7, 1985, edition of NCR was earth-shattering. Berry — whose child had recently been baptized Catholic — published a lengthy piece on the Rev. Gilbert Gauthe’s sexual crimes and their concealment by the highest clerical authorities in Gauthe’s diocese in Lafayette, La. In the same issue, reporter Arthur Jones detailed the concealment of pedophile priests throughout America, and NCR wrote an editorial accusing American Catholic bishops of systemic inaction and silence.

“The concealment of pedophiles reminded me of the Watergate coverup,” Berry said in a recent essay, recalling how he felt when he first dug up reports of guilty priests other than Gauthe being shuffled around the Lafayette diocese.

In its 1985 exposé, NCR laid bare the two essential outrages of the crisis: the scope of the abuse and the magisterial heights from which it was concealed. Berry and Jones’ reporting in that issue loosed a flood of testimonials from abuse survivors throughout America, many of which were later reported for the first time.

By the time The Boston Globe succeeded in bringing the scandal to the attention of the entire world, NCR had been doggedly covering the story for 17 years, often alone. Secular publications, including The New York Times and The Nation, wouldn’t go near the topic. Even the rest of the Catholic press stayed silent.

NCR is an independent, nonprofit publication, staffed by lay people, neither owned nor controlled by the Catholic Church, with a paid circulation of about 35,000. What it lacks in scale, it makes up for in editorial independence, expert reporting and risk-taking in pursuit of the truth. 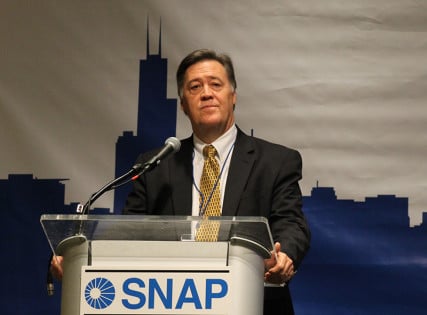 Berry said recently that without NCR’s financial backing, he would not have had the finances to finish his investigations. The story might have taken many more years to come to light, he said, or might never have come to light at all. Because of its refusal to back down in its coverage of the crisis, NCR lost a prominent board member and droves of subscribers, and suffered intense pressure from civil and church authorities.

Spotlight and the events it dramatizes deserve every bit of attention and praise they are receiving. But it is important to remember the limits of cinematic storytelling. Feature films cannot possibly convey the full scope of historical events. By condensing whole groups of people into a few composite characters, and reducing conflicts to a binary struggle between good and evil, filmmakers sacrifice fact for story, and leave us with a kind of after-image of the truth.

Spotlight understandably stays close to the crisis as it unfolded in Boston, getting its narrative drive from the struggles of the Globe’s investigative team. The film does make passing references to the earlier work of smaller Boston publications, The Phoenix and The Patriot Ledger, but it leaves out the crucial fact that it was a vigilant Catholic publication, NCR, which first told the truth about an issue that would transform the Catholic Church and the lives of its members around the world.

NCR’s work embodies the virtues of robust print journalism, especially investigative reporting. Though most Americans get their news from TV and the web, 61 percent of substantive new information in the media still originates from the newsrooms of print publications, according to a 2010 Pew study of the media ecosystem. And in an era when economic pressure has forced general interest publications to lay off their specialty reporters, we need niche publications such as NCR more than ever, to pursue the truth and provide context and deeper understanding when crises become common knowledge.

(William F. Baker, director of the Bernard L. Schwartz Center for Media, Public Policy and Education at Fordham University, is a voting member of the British Academy of Film and Television Arts. This commentary first appeared in USA Today)