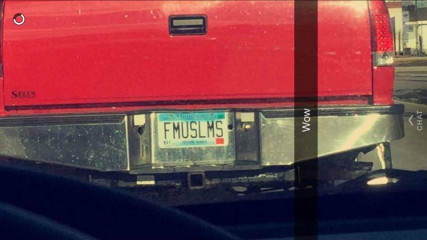 The Minnesota Department of Public Safety has apologized for issuing vanity license plates containing a slur against Muslims and said it will revoke them immediately after a photo of the plates caused a stir on social media over the weekend.

The personalized plates read “FMUSLMS.” A photo of the license plate on the back of a pickup, reportedly taken in St. Cloud, was posted on Facebook over the weekend by #UniteCloud, a grassroots organization that works to resolve cultural tension in the St. Cloud area.

“This personalized license plate should never have been issued; it is offensive and distasteful,” Bruce Gordon, spokesman for the Department of Public Safety, which oversees the Driver and Vehicle Services Division, wrote in a statement Monday (Feb. 22). “We are in process of revoking and taking possession of the plates today.”

The Driver and Vehicle Services Division is reviewing its process for approving personalized license plates and will immediately provide additional review and oversight of applications, Gordon wrote.

The license plates were issued in June 2015, according to DPS. The application was processed at a deputy registrar’s office in Foley, and reviewed by Driver and Vehicle Services.

In Minnesota, personalized license plates are available for an additional fee. The application reads, “A personalized plate that offends public morals or decency may not be issued.”

Gov. Mark Dayton issued a statement Monday saying he was “appalled” that the plate was issued by the state agency.

“It is offensive, and the person who requested it should be ashamed,” the statement read. “That prejudice has no place in Minnesota.”

Dayton said he has instructed the commissioner of public safety to retrieve the plate as soon as possible and review agency procedures to ensure it does not happen again.

Natalie Ringsmuth, founder of #UniteCloud, said people have a First Amendment right to free speech, such as putting the slogan on a bumper sticker on their vehicle. But she said this case is different because the license plates are issued by the government.

Jaylani Hussein, executive director of the Minnesota chapter of the Council on American-Islamic Relations, said in a written statement that his organization plans to send a letter to the state asking for tighter oversight on personalized license plates.

“We are extremely concerned as a community that this type of expression of anti-Muslim (sentiment) is not only existing, but we also missed looking at it,” Hussein stated. “In a personalized license plate, there should be much more careful view because a lot of people who want to create certain types of messages.”

Ibrahim Hooper, national CAIR spokesman, said it’s not the first time racist or bigoted license plates have shown up around the country. He believes it’s “a symptom of the unfortunate mainstreaming of Islamophobia in our society.”

“In an overall atmosphere in which anti-Muslim bigotry is rising, it’s somehow seen as, ‘This is OK for me to do,’ ” Hooper said.

Despite recent media coverage of cultural tensions in St. Cloud, the community’s response to the license plate incident has been overwhelmingly supportive, said Haji Yusuf with #UniteCloud. He said the response shows that most people don’t feel that way toward Muslims.

“It’s not the majority. It’s a few people,” Yusuf said.

(Kirsti Marohn writes for the St. Cloud Times, where this article first appeared)