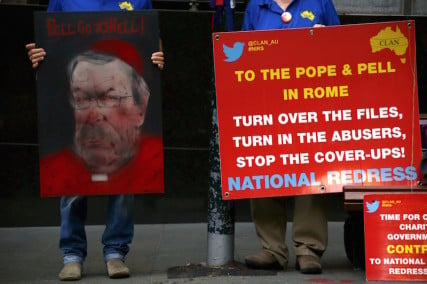 Victims and relatives of children who claim they were sexually abused by the Catholic Church hold placards as they stand outside the venue for Australia’s Royal Commission into Institutional Response to Child Sexual Abuse in Sydney, Australia, February 29, 2016. Australian Cardinal George Pell on Monday becomes the highest-ranking Vatican official to testify on sexual abuse of children in the Catholic Church at a hearing that victims have flown half way around the world to attend. REUTERS/David Gray

ROME (RNS) Australian Cardinal George Pell, now a top adviser to Pope Francis, testified in a landmark clergy sex abuse inquiry that the Catholic Church made “enormous mistakes” in trying to deal with the scandal.

Speaking to an Australian commission investigating the church’s response to abuse, Pell — who had previously been archbishop in Sydney — also said that during the 1970s he was “very strongly inclined to accept the denial” of a priest accused of abuse.

The 74-year-old Pell, who serves as the Vatican’s finance chief, appeared before the Royal Commission into Institutional Responses to Child Sexual Abuse Sunday (Feb. 28) via video link from a Rome hotel because he said a heart condition prevented him from traveling.

The decision to allow Pell to testify via video has been strongly criticized by abuse victims, and a crowdfunding effort in Australia enabled some 15 of them to travel to Italy to be present in the hotel conference room with Pell.

Pell’s testimony, the third time he has spoken to the commission, is part of a broader Australian investigation into child abuse over past decades and even centuries.

But various circumstances have combined to make the event headline news: Not only is Pell the highest-ranking Vatican official ever to testify on the scandal, and in Rome, but his testimony came just before the movie “Spotlight,” about The Boston Globe’s explosive investigation of clergy abuse more than a decade ago, won the Academy Award for best picture of the year.

“This film gave a voice to survivors, and this Oscar amplifies that voice, which we hope will become a choir that will resonate all the way to the Vatican,” producer Michael Sugar said in his acceptance speech. “Pope Francis, it’s time to protect the children and restore the faith.”

Francis has taken major steps in continuing to clear the ranks of the clergy of predators and to hold the hierarchy accountable, but critics say he has still not gone far enough, especially in disciplining bishops and cardinals.

Pell, a feisty conservative who is used to giving as good as he gets on a range of controversial issues, is one churchman the critics hope to target.

As he rose through the ranks of the Australian church, Pell recalled in his testimony that numerous allegations “certainly were dismissed and sometimes they were dismissed in absolutely scandalous circumstances.”

“They were very, very plausible allegations made by responsible people that were not followed up sufficiently,” he added during the four hours of testimony that largely centered on his role in the church in Australia in the 1970s.

Pell met with Francis on Monday, the day after his opening testimony, which is expected to continue over the next few days. As is the custom, the Vatican provided no information on the meeting.

Francis brought Pell to Rome two years ago to help clean up the scandal-plagued Vatican finances; the Australian turns 75 in June, the standard age at which church officials retire.

Pell conceded again in the latest session that the church had made grave errors in its handling of abuse.

“The church has made enormous mistakes and is working to remedy those, but the church in many places, certainly in Australia, has mucked things up, has made — let people down. I’m not here to defend the indefensible,” he said.

Overall, Pell said such failures were personal rather than institutional mistakes.

During the questioning of Pell on Sunday, he was also asked about specific cases, including the case of Gerald Ridsdale, a former priest who was convicted on multiple counts of abusing children as young as four.

Pell told the commission he was unaware that Bishop Ronald Mulkearns, the bishop overseeing Ridsdale in the Diocese of Ballarat, had sent the priest away for treatment over his sexual crimes. Ridsdale was also moved between dioceses and continued abusing children.

Pell was ordained a priest in Ballarat in 1966 and was a consultant to Mulkearns.

The cardinal has previously denied allegations by a victim of Ridsdale that Pell tried to pay him for his silence. Ridsdale’s nephew, David Ridsdale, told the royal commission last year that Pell tried to bribe him after being told he was abused by his uncle.

“At no time did I attempt to bribe David Ridsdale or his family or offer any financial inducements for him to be silent,” Pell said at the time.

Gerald Ridsdale is in prison after being convicted of 138 offenses against 53 victims.

David Ridsdale is in Rome for the testimony and told media that longtime abuse in his heavily Catholic hometown of Ballarat in Australia’s Victoria state has left a legacy of trauma and tragedy.

“We’re here to seek the truth. We’re here to heal our city,” David Ridsdale said, according to The Associated Press. “We have the highest suicide rate among men in Australia. We have some of the worst drinking and violence problems. And it all stems from that abuse.”

The cardinal’s nighttime testimony is due to continue late Monday, to account for the time difference with the commission in Australia, with one or two further sessions to be held in the coming days.