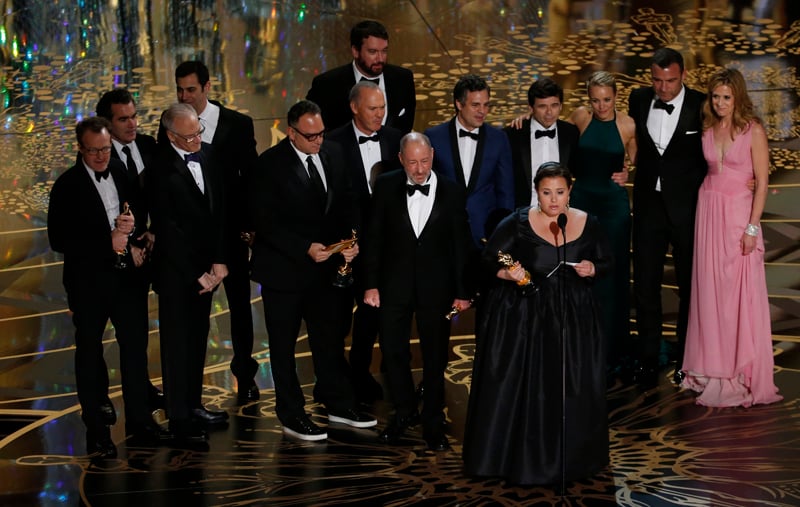 Producer Nicole Rocklin accepts the Oscar for Best Picture for the film “Spotlight” as she is accompanied by other producers and cast members at the 88th Academy Awards in Hollywood on Feb. 28, 2016. Photo courtesy of REUTERS/Mario Anzuoni

VATICAN CITY (RNS) Just hours after the movie “Spotlight” picked up the best picture prize at the Academy Awards, the Vatican newspaper praised the film for its portrayal of The Boston Globe’s investigation into clerical sex abuse in the U.S.

The Oscar win on Sunday (Feb. 28) was hailed by producer Michael Sugar as amplifying the voice of survivors. “Pope Francis, it’s time to protect the children and restore the faith,” he said in his acceptance speech in Los Angeles that was broadcast around the world.

Sugar’s voice apparently reached Rome as well, with a columnist for the Vatican’s semiofficial newspaper, L’Osservatore Romano, asserting that the film had a compelling plot and should not be considered “anti-Catholic.”

“It manages to voice the shock and profound pain of the faithful confronting the discovery of these horrendous realities,” wrote journalist Lucetta Scaraffia.

Scaraffia said the movie did not go into detail on what she called the “long and tenacious battle” against clergy abuse by Pope Emeritus Benedict XVI — formerly Cardinal Joseph Ratzinger — but she noted “one film cannot tell all.”

“The difficulties that Ratzinger met with do not but confirm the film’s theme, which is that too often ecclesiastical institutions have not known how to react with the necessary determination in the face of these crimes,” Scaraffia wrote.

Benedict was elected pope in 2005 after the death of Saint John Paul II and he has been credited for taking significant steps — after initialing dismissing the extent of the crisis — to crack down on abusive priests.

Francis was elected in 2013 when Benedict resigned, and he has pushed for further reforms, including initial efforts to hold bishops accountable for failing to protect children from predators.

But both popes have also been criticized for not going far enough.

In her column, Scaraffia praised the film for recounting the reality of how, within the Catholic Church, “some are more preoccupied with the image of the institution than of the seriousness of the act.”

Scaraffia also noted Sugar’s acceptance speech, arguing that his reference to the pontiff demonstrated there was still hope in the institution of the church.

“There is trust in a pope who is continuing the cleaning begun by his predecessor,” she wrote.

L’Osservatore Romano’s praise for the movie follows comments of a similar vein by Archbishop Charles J. Scicluna of Malta, who said earlier this month that all bishops and cardinals should watch the film.

“The movie shows how the instinct — that unfortunately was present in the church — to protect a reputation was completely wrong,” Scicluna told an Italian newspaper.

The Oscar win by “Spotlight” came as Cardinal George Pell, who serves as Pope Francis’ financial adviser, testified to Australia’s royal commission into sex abuse. Pell was questioned on his knowledge of abuse while a clergyman in the country.