EDGERTON, Kan. (RNS) The Rev. Cynthia Meyer said she was “called by God to be open and honest” about who she is. So, during her first sermon of 2016, Meyer broke the news: She loves another woman.

“I’ve been praying, and in a process of discernment for some time, particularly over the past few years, once I entered into a relationship,” said Meyer, pastor of Edgerton United Methodist Church.

Meyer, 53, was ordained in 1992 and served for 12 years as assistant dean of students at Emory University’s Candler School of Theology, a United Methodist-affiliated school in Atlanta.

In July, more than a year after she and her partner, Mary Palarino, began living together, Meyer accepted the call to be pastor in this community of 1,700 just southwest of Kansas City. 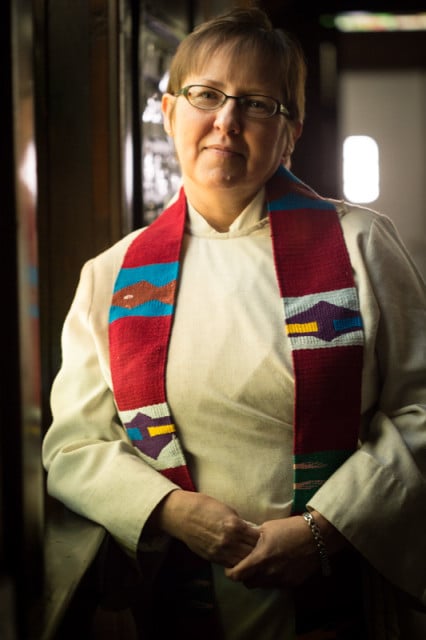 The Rev. Cynthia Meyer says she was “called by God to be open and honest” about who she is. So, during her first sermon of the new year, Meyer told the small congregation at Edgerton United Methodist Church about her relationship with a woman. Religion News Service photo by Sally Morrow

‘So, I recognize that I may have to leave’

This rural pastor knew as well as anyone the repercussions of coming out.

And indeed, soon after he received a copy of her Jan. 3 sermon, Bishop Scott Jones of the Great Plains Conference asked for Meyer’s suspension.

The United Methodist Church accepts gay and lesbian members, but its Book of Discipline calls the practice of homosexuality “incompatible with Christian teaching.”

So far, the executive committee of the Board of Ordained Ministry has not approved the suspension, so Meyer continues to serve as pastor at Edgerton.

Meyer and the bishop, who has the authority to appoint and remove pastors, have began a “supervisory response process,” which involves meetings to work toward a “just resolution.”

If a resolution cannot be agreed upon within a certain time, the issue will be brought to a church trial.

“The church would be glad to have my services if I would be quiet and stay in the closet, and I think I’ve indicated that I will not do that. So, I recognize that I may have to leave,” Meyer said.

Meyer is well-versed in the ins and outs of her denomination’s policies regarding LBGT people.

Asked about the possibility of leaving a church she has been a part of for 40 years, Meyer was blunt:

The ‘views of the people in the pews’ have changed

Although a few families chose to leave Meyer’s congregation, most have stayed and remain supportive of their pastor.

“The views of the people in the pews have changed quite dramatically in the last few years,” said Meyer. Even in rural Kansas, she said, she has witnessed a broad shift in opinion.

READ: Franklin Graham wants your heart, not your vote

Several people she anticipated would balk at her announcement reacted positively. The day of Meyer’s coming-out sermon, she said, there were “more hugs than usual” at the end of the service. And people were sharing stories of their own family members and friends who have come out as gay.

“We’re very proud of her taking a stand, and having enough courage to go all the way with it,” said Rita Jones, a six-year member of the Edgerton congregation. “We’re very proud that she’s our pastor.”

And of those who left, Meyer said: “We hold all of those folks in prayer. Everyone will be welcomed back, and if not, they go with our love.”

The issue of gay clergy and same-sex marriage will be a focus at the denomination’s worldwide General Conference in May.

Advocates for LGBT rights have been swelling for years, and they point out that the 12 million-member UMC is the largest mainline Protestant group to reject same-sex marriage. But Methodists in Africa and Asia have resisted any moves to open the doors to LGBT clergy or to allow clergy to officiate at same-sex marriages, and those overseas Methodists now constitute a majority.

Meyer plans to attend the General Conference, and she is working with Reconciling Ministries Network and its campaign “It’s Time,” which asks members of the church to send letters to their delegation and share stories, in the hopes of influencing the conference vote.

‘Go ahead and do the wedding’

In a recent Kansas City Star article, Meyer urged others to join the movement toward equality.

“My voice alone can only do so much,” she wrote. “Together, we can move the church to fully affirm that all people are of equal sacred worth with equal opportunities in the church.”

Her advice to other gay clergy and to allies of the LGBT community within the church: Speak up.

Meyer wants other gay clergy to know “they too can take this step, and share who they are.”

She added: “I think they would be amazed at the support they would receive. Of course they have to look at the risk, but I think this is what will make the change — if more people are willing to speak up.”

And to clergy who are allies and want to offer full services, including marriage, to all of their members, Meyer said, “Go ahead and do the wedding, and let it be known.”