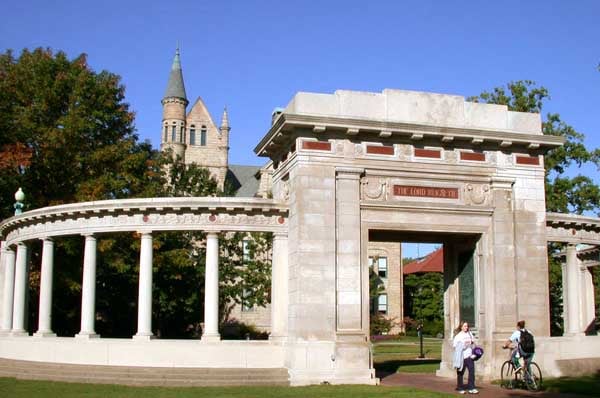 Students passing through the Oberlin Memorial Arch in front of Peters Hall.

Imagine: you’re a parent of a Jewish kid, and you’ve forked over more than $64,000 for that kid to attend Oberlin College.

The last thing either you or your kid expected was to encounter anti-Jewish hatred on campus.

That wasn’t in the course catalogue.

Dr. Joy Karega, an assistant professor of rhetoric and composition at Oberlin, has been posting anti-Israel, anti-Zionist, and anti-Semitic diatribes on her Facebook page. She has said that “Israel and Zionist Jews” were behind the 9/11 attacks; that the Mossad orchestrated the Charlie Hebdo attack, and that Israel is responsible for ISIS.

She is also obsessed with the Rothschild banking dynasty, posting a photograph of Jacob Rothschild: “We own nearly every central bank in the world. We financed both sides of every war since Napoleon. We own your news, the media, your oil and your government.”

Oberlin’s president, Marvin Krislov, who is Jewish, has defended her right to free speech. He has said that the essence of a liberal arts education at Oberlin is to “interrogate assertions with facts and deep, critical thinking from multiple viewpoints.” Yesterday, the college’s reaction to Karega got sharper; its board of trustees denounced her posts as “anti-Semitic and abhorrent.”

But, it gets worse.

Every student on the Oberlin campus received an anonymous email with this message: “The state of Israel, Zionist Jews are pure evil. They did 9/11.” This is no coincidence. There is a straight line from Professor Karena’s feverish rantings to this mass email, which was either inspired by, or emboldened by, her hateful rhetoric.

The daughter of a friend of mine attends Oberlin. These are her words: “As a supporter of Israel, I no longer feel safe on this campus.”

Imagine that there had been similar verbal attacks against blacks. Or the LGBT population. Or Muslims.

Would President Krislov be interested in “interrogating assertions with facts and deep, critical thinking from multiple viewpoints?”

But when it comes to the Jew hatred, we are supposed to be open-minded, and to entertain multiple narratives and truth possibilities. No matter how far-fetched, bizarre, and anti-intellectual they might be.

But, wait a second. What about all of that current academic jargon —  that universities should be “safe places“? Or, that we should avoid inflicting “micro-aggressions“?

“Safe places” for everyone — every ethnic group, every identity group, and every ideology.

Except — for self-affirming Jews and supporters of Israel. No safe places for them.

And micro-aggressions? Let us be overly cautious and oh-so-sensitive against every aggression or perceived aggression — even criticism — no matter how micro.

They don’t count. They’re not part of the sensitivity club. At Oberlin, students have referred to the Holocaust — arguably, one of the most “aggressive” moments in history — as “white on white crime.”

What about the uber-hip academic fad of “intersectionality” — the belief in overlapping or intersecting social identities and related systems of oppression, domination, or discrimination? It’s the idea that there are far less than “six degrees of separation” between all oppressions and social movements.

Of late, I have been doing a lot of thinking about the Trump phenomenon. I find its implications for the American political system and for our nation to be terrifying.

But, the recent explosion of anti-Jewish hatred at Oberlin reminds us that the politics of fear is hardly confined to the right. It is very much at home in the cultural and academic left. It is the mirror image of Trumpism: conspiracy theories, willful ignorance, and an equally-terrifying mob mentality.

And those academics let themselves be used.

Back to Oberlin. The ADL has said that Oberlin is now on the right track, beginning the difficult work of addressing this festering sore at the heart of academia.

I leave it to parents, and members of the board of trustees and alumni association, to discern how best to further deal with this anguished situation. I would like to believe that it’s not just the Jews who will be upset about this. All people who are connected to Oberlin must speak out, and speak out loudly. For this blackens the name of one of America’s great institutions of higher learning.

One last thing — a memo to Jewish kids, and Jewish parents.

You can forget about colleges being guaranteed “safe places” for Jewish concerns. And, in some ways, this is for the best. A college atmosphere that refuses to coddle you means that you will need to strengthen your own Jewish identity and own your own narrative.

This means that the highest priority for all Jewish educational institutions — synagogues, day schools, summer camps, JCCs — is to make sure that when kids leave the shelter of their parents’ homes and their home communities — that they know how to stand up for themselves as Jews.

Because when it comes to the university, if the kid gloves were ever on, they are now surely off.