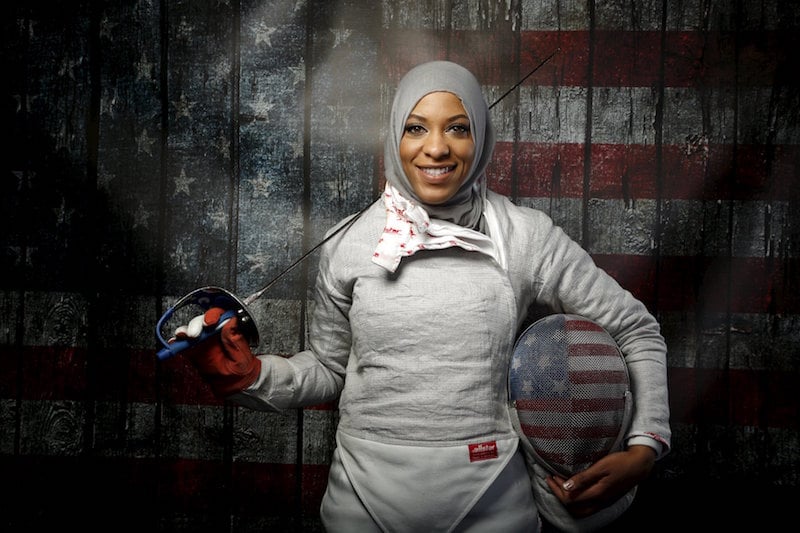 (Reuters) Organizers of the South by Southwest (SXSW) arts festival have apologized to U.S. Olympian Ibtihaj Muhammad after a volunteer said she must remove her Muslim headcovering to receive credentials to the event in Austin, Texas.

The Olympic fencer was picking up an identification badge at the interactive, film and music event on Saturday when a volunteer told her she must take off her hijab before her photograph could be taken.

“Even after I explained it was for religious reasons, he insisted I had to remove my hijab,” she said on Twitter.

In an email to Reuters on Sunday (March 13), SXSW organizers said that they have since removed the volunteer for the duration of the event.

“We are embarrassed by this and have apologized to Ibtihaj in person, and sincerely regret this incident,” SXSW said in the statement.

Muhammad, 30, will make history in Rio de Janeiro as the first Olympian to represent the United States wearing a hijab. Muhammad has become an outspoken critic of presidential candidate Donald Trump, who called for a ban on Muslims from entering the United States.

RELATED STORY: Trump is getting out the Muslim vote

“I feel like I owe it to people who look like me to speak out,” Muhammad told reporters on Wednesday. “When I hear someone say something like, ‘We’re going to send Muslims back to their countries,’ I say, ‘Well, I’m American. Where am I going to go?”

After the incident was resolved at the event, Muhammad said on Twitter that she was issued the wrong identification.

Thennnnn I was given the wrong ID! From now on my name is Tamir & I work for Time Warner Inc #SXSW2016 pic.twitter.com/TE3jJR16P6

Muhammad is ranked No. 7 in the world and second in the U.S. in saber, according to the USA Fencing website.

USA Today noted that after the check-in incident, she was on a panel called “The New Church: Sport as Currency of American Life.”

“I had a crappy experience checking in. Someone asking me to remove my hijab isn’t out of the norm for me. … Do I hope it changes soon? Yes, every day,” ahe told the audience, according to the Chicago Tribune.

The Tribune also reported that she said of sponsors who might object to her speaking out: “If a sponsor wants to walk away … they weren’t meant for me anyway.”

Religion Hub
Tibetans in India demonstrate against Beijing Olympics
Follow us on Facebook!
Submit your photos to RNS