(RNS) Salim Jaffer moved to the U.S. when he was 14 years old. His family, along with the rest of the Indian community, had been expelled from Uganda in 1972 under the violent dictator Idi Amin and sought a respite in America.

But he said he’s never felt in danger until this year.

“As a Muslim, I feel threatened,” said Jaffer, a gastroenterologist living in Lansing, Mich. “It’s as if someone is trying to take away my civil rights. Think about it. Donald Trump thinks we should stop immigration of Muslims coming into this country. Marco Rubio, he wants to close down mosques. Ted Cruz, he wants to see if ‘sand glows’ in Syria.”

That’s why Jaffer participated in his first-ever presidential primary Tuesday (March 8), casting his vote for Democratic candidate Hillary Clinton. And it’s the reason he, a doctor who only superficially followed politics for most of his life, has just submitted paperwork to register a new nonprofit organization aimed at getting Midwestern Muslims to vote in November.

“From a Muslim standpoint, we’ve got to make sure we get somebody who is sympathetic to our cause and understands the sociology, the theology, the anthropology and the history of Islam,” he said.

With Trump leading the Republican race, Muslim groups are launching voter registration drives in a push to ensure that the Islamophobic rhetoric of the election campaign is rejected at the polls.

“Anti-Muslim rhetoric is motivating Muslim Americans across the country to engage in the political process like never before,” Minnesota Rep. Keith Ellison, the first Muslim elected to Congress, told RNS. “This is true in Minnesota, as well as in swing states like Virginia and Florida where Muslim Americans will play a critical role on Election Day.”

The Pew Research Center estimates that there are 3.3 million Muslims in the U.S. And, according to data from the Council on American-Islamic Relations, almost three-quarters of Muslim voters plan to vote in state primaries this year.

“If you as a political candidate choose to spew hatred, bigotry and to vilify Muslim Americans, you do so at your own political risk,” Altaf Husain, vice president of the Islamic Society of North America, declared at a press conference in December. “We will use every democratic means and political strategy to ensure your candidacy never succeeds.”

That day, CAIR and more than a dozen affiliated Muslim groups announced a national drive to register 20,000 voters. The US Council of Muslim Organizations is also planning a campaign to register 1 million voters before Election Day. 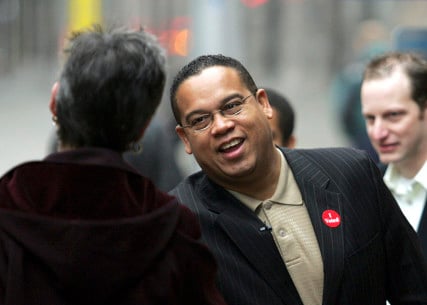 Keith Ellison, Democratic candidate for Congress, greets commuters at a light rail stop in Minneapolis on Nov. 7, 2006. After his election, Ellison became the first Muslim in Congress as well as the first black representative from Minnesota. Photo courtesy of REUTERS/Eric Miller
*Editors: This photo may only be republished with RNS-MUSLIM-POLL, originally transmitted on July 14, 2015, or with RNS-MUSLIM-VOTERS, originally transmitted on March 10, 2016.

Mosques in Virginia and Georgia have sent mass emails, posted signs and set up tables outside their prayer halls to direct members on how to vote in their primaries. Imams from Chicago to Detroit are underscoring the importance of voting during their Friday sermons.

“There’s a lot in the balance this election cycle for American Muslims, not just the general issues around the economy and health care,” said Imam Dawud Walid, who heads CAIR’s Michigan chapter and has spoken at local Islamic centers about this election’s importance. “We’re urging people to exercise their right to vote in particular if they don’t want to see a president who is making statements that Muslims aren’t welcome in the U.S.”

On Wednesday night, Trump said Islam had a “tremendous hatred” of the West. In December, he called for a “total and complete” shutdown of Muslim immigration to the U.S. He has claimed that American Muslims celebrated 9/11 and said Muslims should carry a special ID. Last month, he recounted as fact an old debunked myth about a general executing Muslims with bullets dipped in pigs’ blood.

And he’s won primaries or caucuses in 15 states so far.

“We used to find this kind of Islamophobia lurking on anonymous blogs or Islamophobic websites,” said Omid Safi, who directs Duke University’s Islamic studies center. “Then we saw them move over to Fox News, and now being amplified from the mouths of people running for the highest office in the land.”

About a quarter of Muslim voters CAIR surveyed on Super Tuesday named such Islamophobia their top concern going into the primaries. In 2014, it ranked third. For many, that rising fear now comes coupled with the realization that Trump could be sitting in the Oval Office come January. 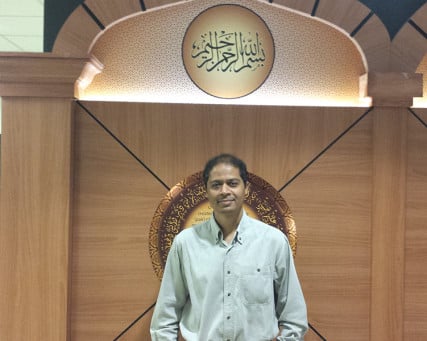 It’s resulting in a movement not unlike one happening in the Latino community, where some legal residents are rushing to earn their citizenship in time to vote against Trump in November.

Voter advocacy is particularly important in immigrant communities, where people may not understand how and why to perform their civic rights, said Thasin Sardar, former president of Michigan’s Islamic Society of Greater Lansing.

The multicultural mosque is gearing up to join the US Council of Muslim Organizations’ voter registration drive now that the state’s primary elections, which Trump and Bernie Sanders won, are over.

“The primaries in Michigan aren’t as competitive as in other states,” said Sardar, who voted for Sanders. “And of course, the Republican side isn’t of much interest to us, other than not wanting them to win in the presidential election.”

It wasn’t so long ago that Muslims actively supported the Republican Party. Many identified with the party’s social conservatism that stood against against gay marriage and abortion rights. More than three-quarters of American Muslim voters cast ballots for George W. Bush. Even today, CAIR estimates that 18 percent of Muslim voters will be supporting Republican candidates, and up to 11 percent favor Trump. These Muslims, such as first-time voter Syed Hussain of Maryland, say they are more concerned about economic issues than Islamophobia. Still, he’s expressed unease over Trump’s comments about banning Muslim immigration. “But at least he’s honest, and I think he won’t be able to do it,” he told RNS.

But the focus has largely shifted since then. After the Sept. 11, 2001, terrorist attacks, “the narrative in the Muslim community changed to think about issues affecting them in a way we’ve never seen before,” said Los Angeles-based political activist Tanzila Ahmed. From the Patriot Act to the Iraq war to conservative backlash against Middle Eastern and South Asian communities, Muslim Americans felt betrayed. 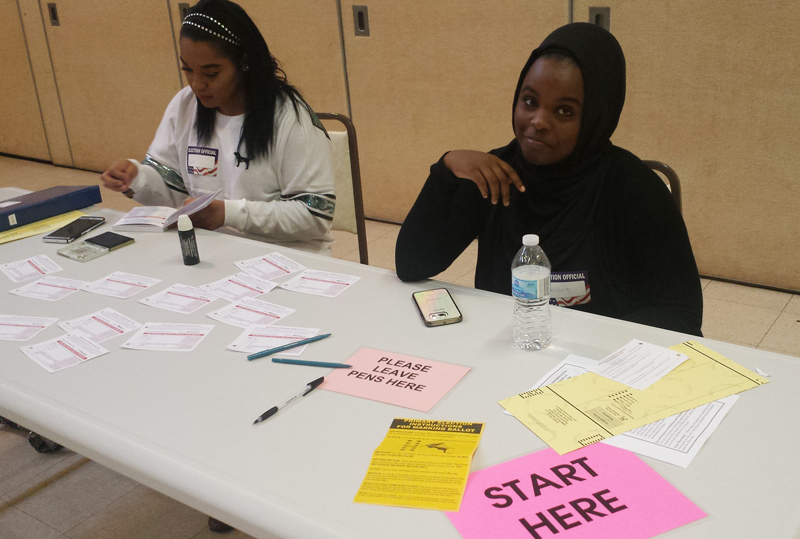 Fardowsa Omar, right, a member of Islamic Center of East Lansing, Mich., works at the Precinct 5 polls during the primary on March 8, 2016. Photo courtesy of Thasin Sardar

Now, almost 15 years after 9/11, about 67 percent of Muslim American voters say they are supporting Democratic candidates in the upcoming presidential elections, according to data from CAIR.

Younger and more liberal Muslim voters are overwhelmingly in favor of Sanders, who has campaigned strategically with Muslim and Arab communities by visiting mosques, giving an hourlong speech against Islamophobia and airing Arabic-language ads in the city with the highest Arab concentration. Older Muslims still dislike Clinton’s pro-Israel stance but have put their weight behind the Democratic Party’s establishment candidate.

Civic leaders are harnessing this energy to mobilize voters.

Teams in Los Angeles, San Diego, New York City, San Francisco and tens of other cities are organizing electoral engagement on the ground. Organizing platform MPower Change’s new campaign urges supporters to pledge “to make sure that this election will no longer be about us, without us,” through media and voter engagement. A new video series from Emerge USA pushes Muslim communities to vote at a rate 10 percent above the state average.

“Turn your centers, Islamic centers, mosques into registration centers for voters, into polling stations during the election time,” CAIR’s Nihad Awad said on stage at a major Islamic conference in Chicago. “We have to register every single Muslim to vote in 2016.”

That type of mass mobilization is a ways off, according to Ahmed, who works as a campaign manager for Asian-American activist group 18MillionRising and has trained Muslim leaders to work in electoral engagement. Still, she said, the numbers will only go up from here.

“I don’t think people were seeing (Trump) as a big contender until Super Tuesday,” Ahmed said. “I’m not sure we’re seeing a Trump effect with Muslims heading to the polls yet. But we’re definitely going to be seeing it in the next few months.”

Ahmed said Muslim organizers are using Trump’s “embodiment of the fear-industrial complex of Islamophobia” strategically to push voters to the polls — just as much as analysts suggest Trump is capitalizing on Islamophobia to gain right-wing support.

“Trump is using the rhetoric of fear and bigotry to mobilize support around him in a time of economic uncertainty,” Safi, who has endorsed Sanders, explained. “Many Muslims are starting to recognize that it’s not about persuading people that Muslims are human. It’s ultimately about building the Beloved Community here in America, as Dr. King used to say.”