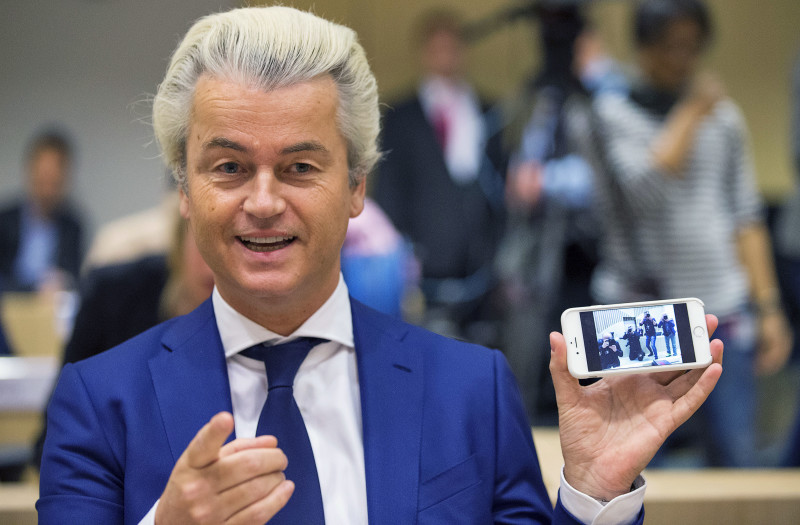 Dutch far-right Party for Freedom (PVV) leader Geert Wilders shows the picture of the photographers he took with his cell phone prior to his trial in the courtroom in the courthouse in Schiphol, the Netherlands March 18, 2016. REUTERS/Michael Kooren.
March 18, 2016
Reuters 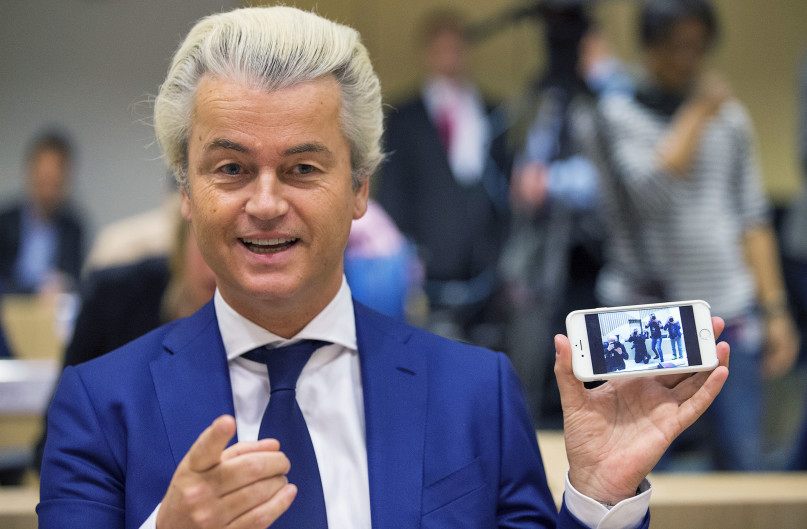 Dutch far-right Party for Freedom (PVV) leader Geert Wilders shows the picture of the photographers he took with his cell phone prior to his trial in the courtroom in the courthouse in Schiphol, the Netherlands March 18, 2016. REUTERS/Michael Kooren.

AMSTERDAM -- Geert Wilders, the Dutch far-right politician who was acquitted five years ago of making anti-Islam remarks, went on trial again on Friday for hate speech and discrimination against the Moroccan minority.

The case comes as Wilders and other populist politicians including Donald Trump in the United States and Marine le Pen in France have won support by calling for bans on Muslim immigration.

Wilders, with his trademark peroxide blonde hair, joked with reporters at the start of the hearing and listened calmly as prosecutors detailed the charges. He says the trial is politically motivated and that his comments are protected by his right to free speech.

"Freedom of expression is not absolute, it is paired with obligations and responsibilities," said lead prosecutor Wouter Bos, "the responsibility not to set groups of people against each other."

"Racism and hatred of foreigners constitute a direct violation of the basis of freedom, democracy and the rule of law."

Wilders attracted the attention of prosecutors by repeatedly calling for "fewer Moroccans" during election campaigning in 2014.

At one rally, he asked supporters whether they wanted more or fewer Moroccans, triggering the chant: "Fewer! Fewer! Fewer!", to which a smiling Wilders responded: "We'll take care of that." In a television broadcast, he called Moroccans "scum".

The lawmaker, whose decade-old Freedom Party holds a commanding lead in Dutch popular opinion polls but has never been in power, denies any wrongdoing.

"Nobody will silence me. Not about Moroccans either," he tweeted last week. "No terrorist threats ... no judge. Nobody."

Wilders has lived under 24-hour protection since the 2004 murder of Theo van Gogh, who - like Wilders - made films criticizing Islam.

The case against Wilders in 2011 centered on his calls for "Muslim criminals" to be stripped of their Dutch nationality and deported, and his comparison of the Koran to Hitler's manifesto "Mein Kampf".

Wilders says he has no grudge against immigrants who accept Dutch laws and customs, and that he has never advocated violence.

Judges concluded then that Wilders' remarks might have been offensive, but acquitted him because the target was a religion, not a race.

Wilders faces one charge of discrimination and a second of inciting hatred of Moroccans, who make up about 2 percent of the population. If convicted, he could go to jail for as long as a year and be fined a maximum of 7,400 euros ($8,400).

In France in December, Le Pen was acquitted of inciting hatred against French Muslims by comparing Muslims praying in the street to the Germans who occupied France during World War Two.