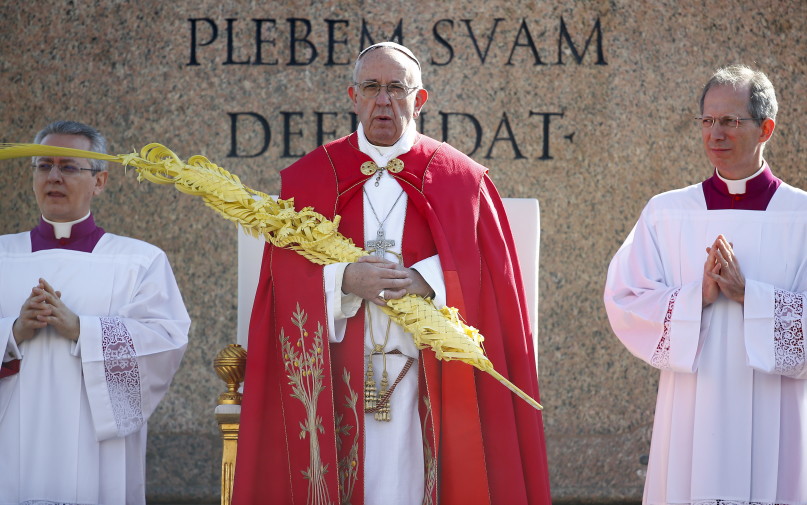 VATICAN CITY — Pope Francis, leading the world’s 1.2 billion Roman Catholics in Palm Sunday services leading up to Easter, on Sunday criticized those who he said were washing their hands of the fate of desperate refugees.

Francis blessed palm and olive branches in St. Peter’s Square before tens of thousands of people to commemorate Jesus’ triumphant entrance into Jerusalem the week before the crowd turned against him and he was crucified.

He departed from his prepared homily to appeal to nations not to turn their backs on refugees.

RELATED STORY: No, Pope Francis didn’t exactly fire his ambassador to US — yet

After mentioning the part of the gospel recounting how Jesus was denied justice and abandoned to his fate, Francis added in unscripted remarks:

“I am thinking of so many other people, so many marginalized people, so many asylum seekers, so many refugees. There are so many who don’t want to take responsibility for their destiny.”

Over 1.1 million migrants fleeing war and failed states flowed into the European Union in 2015 and the influx has continued, prompting countries straddling the main migration corridor through the Balkans to the wealthy north of the EU to seal their borders, trapping tens of thousands in Greece.

RELATED STORY: Sanders: Pope Francis is a socialist like me

Last week, Macedonia trucked 1,500 migrants back to Greece after they forced their way across the border. Images of exhausted migrants fording a fast-moving stream in the cold were splashed across Italian newspapers.

Under a European Union deal reached last week with Turkey, all migrants and refugees, including Syrians, who cross to Greece illegally by sea will be sent back to Turkey once they are registered and their asylum claims have been processed.

In return, the EU will take in thousands of Syrian refugees directly from Turkey and reward it with more money, early visa-free travel and progress in its EU membership negotiations.

Palm Sunday marks the start of the busiest week in the Catholic liturgical calendar.

Francis has two events on Holy Thursday, including a ritual where he washes and kisses the feet of 12 people commemorating Christ’s gesture of humility towards his apostles on the night before he died.

The pope presides at two services on Good Friday, including a candlelight Via Crucis (Way of the Cross) procession around Rome’s Colosseum.

He leads an Easter vigil service on Saturday and on Easter Sunday he delivers his twice-yearly “Urbi et Orbi” (to the city and the world) blessing and message from the central balcony of St. Peter’s Basilica.