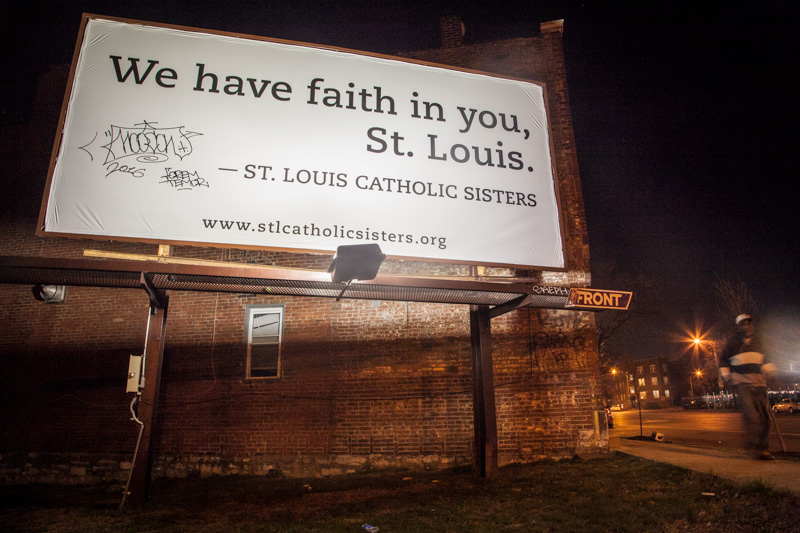 ST. LOUIS (RNS) This Mississippi River city and the surrounding area have taken some hits over the past year, from the ongoing racial tensions over police shootings in Ferguson to the deadly and costly floods that struck the region earlier this year.

Even St. Louis’ pro football team has bailed, as the Rams announced in January that they are decamping to the sunnier climes of Southern California.

But the Catholic nuns of the metropolitan area want the city to know that they are sticking around and they have launched a billboard campaign to show their commitment, featuring the message “We have faith in you, St. Louis.”

“As Catholic sisters, we believe in a God who works through us in surprising ways,” Sister Mary Flick, a Sister of St. Joseph of Carondelet and native St. Louisan, said in a statement announcing the campaign.

“The people of St. Louis have generous hearts. Through our celebrations and our struggles, we continue to see the good in each other and what is possible together. We believe in a future full of hope,” she said.

The campaign is a joint initiative by 15 different orders from the area and it coincides with the celebration of National Catholic Sisters Week, which is observed every year in March. It is also held in conjunction with National Women’s History Month.

“More St. Louis area residents of all faiths, ethnicities and backgrounds have been served by sisters than many realize,” said Belinda Davis, spokeswoman for the local Daughters of Charity.

“Catholic sisters may no longer teach in every parish school or care for patients at every Catholic hospital, but they are alive, well and still relevant,” she said. “Today’s sisters minister to immigrants, the homeless, the voiceless and the trafficked.”

News
Taco trucks and voter guides boost political profiles of faith communities at the margins
News
Study: Biden still leads among Latino Christian voters, but Trump’s support has grown
News
In Oregon, churches and anti-fascists unite to provide mutual aid to fire evacuees and others in need
Opinion
What good is faith when your fertility treatments aren’t working?
News
Who is Junipero Serra and why are California protesters toppling statues of this saint?