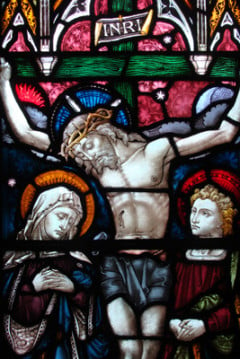 Jesus on the Cross. The central image in Christian worship and art. The heartbeat of Christian piety for millions of devout believers. As Good Friday approaches, some two billion Christians around the world will again come together around Jesus, on the Cross.

But why, exactly, did Jesus die? Or, more provocatively: Why was Jesus killed? Might different answers to that question reflect different understandings of Christian theology and lead to different implications for Christian living?

If you ask the average Christian, probably most will say that Jesus died on the Cross “for our sins.”  What does that mean? How many Christians could offer a coherent follow up sentence to that claim?

I don’t think there is a single answer to the question of why Jesus died. I do believe that considering various answers is a worthy exercise.

So here are four partial answers I would like to offer to the question of why Jesus was killed, why he died on the Cross on “Good Friday.” Three might surprise you.

(1) Jesus was killed because the Roman governor in Jerusalem considered him some kind of threat.

Crucifixion was a grotesque and horrifying punishment, mainly intended to suppress any thought of rebellion by subject peoples against the Roman Empire. Rome maintained a monopoly on capital punishment where it ruled, and Rome’s representative was the only one who could crucify Jesus. Thinking about Jesus as someone who could be perceived as a threat to Rome changes the way we read the stories about him and how we hear his teachings. If Jesus was so meek and mild, so harmless and otherworldly, why would he be nailed to a Cross?

(2) Jesus was killed because certain local religious and political leaders considered him some kind of threat.

This uncomfortable claim cannot be avoided from a straightforward reading of the Passion Narratives of the Gospels. Indeed, long before he entered Jerusalem, Jesus had been clashing with, variously, Pharisees, Sadducees, scribes, and Temple officials. According to the Gospel accounts, they decided that he was unbearable and must be destroyed.

Exactly why he was unbearable to them can be read in various ways. Perhaps it was his criticisms of them, his challenges to their way of construing fidelity to God and Torah, with Jesus emphasizing mercy and justice, especially for those on the margins, and his adversaries viewing him as teaching disobedience to Torah. But some texts emphasize leaders’ worry over Jesus’ hold on the crowds, with the associated fear that his movement would bring down the wrath of Rome in a great cataclysm.

All of this is complicated by legitimate scholarly concerns that the Gospel writers had an agenda of highlighting Jewish-leadership responsibility rather than Roman responsibility for Jesus’ death, and that this colors the accounts offered in the Gospels. Certainly for many centuries horrific Christian anti-Semitism was fed by blaming “the Jews” for Jesus’ death, a fact which must inform how these texts are interpreted today.

(3) Jesus was killed because he was betrayed by a friend.

The Gospels suggest that for several days in the last week of his life, Jesus essentially took control of the Temple, the center of Jewish life and worship. He offered provocative teachings, with huge crowds hanging on his every word. It was impossible to arrest him because of the fear of a riot or rebellion. But for some very mysterious reason Jesus’ close disciple Judas gave his enemies the location of where Jesus could be found at night, away from the protection of the crowds. There Jesus was arrested; by the next afternoon he was dead.

Why did Judas betray Jesus? Was it because he had grown disillusioned with Jesus? Was he hoping to incite a Messianic political rebellion by triggering a confrontation between Jesus and the authorities? Was he in it for the money? No one knows. But it is important to remember that Jesus died in part because a friend betrayed him. That has always been an aspect of the profound pathos of this story. Jesus only had Twelve. One of them betrayed him to death.

(4) Jesus was killed, but his death brought the salvation of the world.

Churches feature crosses, of course, because Christians believe that this death was not just another political-religious murder, but instead the event that saves the world. There are at least a half-dozen major theories as to how exactly Jesus’ death accomplished this salvation. The most commonly held is the idea that Jesus was the innocent sacrificial victim who carried on his suffering shoulders the sins of the world, making forgiveness possible for all who believe — this is the New Covenant Jesus spoke about at the Last Supper.

But then there is Resurrection Sunday. When I can get there, truly get there, what I see when I look at the Cross is but one terrible act in a play of many acts. If the Resurrection is true, in the end God wins, love wins, and life wins. In the end. But we are not yet at the end, and so we see that victory of God and love and life only in glimpses.