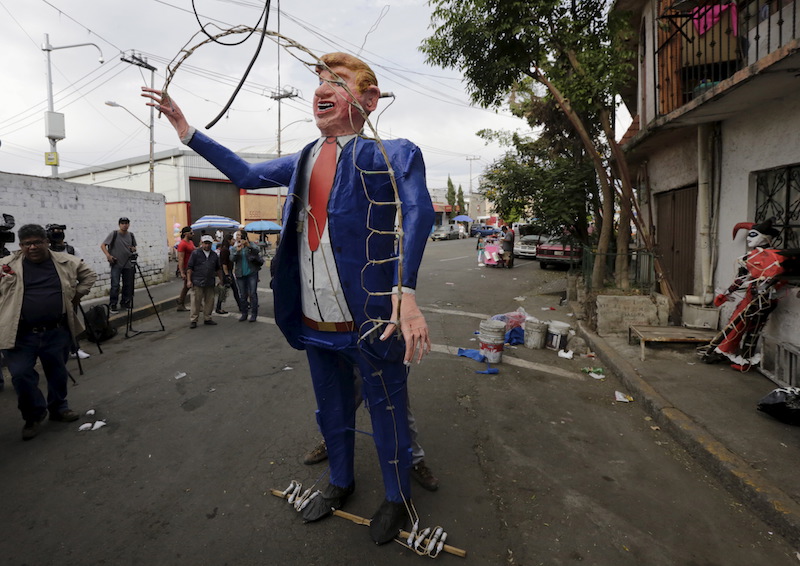 An effigy of Republican presidential hopeful Donald Trump is seen outside at a workshop before it was burned during an Easter ritual late on Saturday in Mexico City’s poor La Merced neighborhood March 26, 2016. Photo courtesy REUTERS/Henry Romero

In Mexico City’s poor La Merced neighborhood on Saturday (March 26), hundreds of cheering residents yelled “death” and various insults as they watched the explosion of the grinning papier-mâché mock-up of the real estate tycoon, replete with blue blazer, red tie and his trademark tuft of blond hair.

The burning is part of a widespread Mexican Holy Week tradition where neighborhoods burn effigies to represent Judas Iscariot, who betrayed Jesus Christ according to the Bible. The effigies are often modeled on unpopular political figures.

“Since he started his campaign and began talking about immigrants, Mexico, and Mexicans, I said ‘I’ve got to get this guy,'” said Felipe Linares, the artisan who crafted Trump and whose family has been making Judases for more than 50 years.

Trump, the front-runner to win the Republican nomination for the Nov. 8 election, has drawn fire in Mexico with his campaign vow to build a wall along the southern U.S. border to keep out illegal immigrants and drugs, and to make Mexico pay for it.

Mexican President Enrique Pena Nieto has said his country will not pay for the wall and likened Trump’s “strident tone” to the ascent of dictators like Adolf Hitler and Benito Mussolini.

Trump, who has also aroused concern among many in his own party with his proposals, has accused Mexico of sending rapists and drug runners across the border and vowed to increase fees on some Mexican visas and all border crossing cards to help make Mexico pay for the wall.

Judas effigies are burnt in villages and towns in several Latin American countries such as Venezuela and in parts of Greece. Anthropologists say the practice serves a symbolic function to overcome divisions and unite communities around a common enemy.

LOOK:  Stations of the Cross in a Mexico City prison (PHOTOS)

Linares has also done mock-ups of corrupt former union leader Elba Esther Gordillo and President Enrique Pena Nieto, whose popularity has been hit by conflict-of-interest scandals and the disappearance of 43 students at the hands of corrupt police.