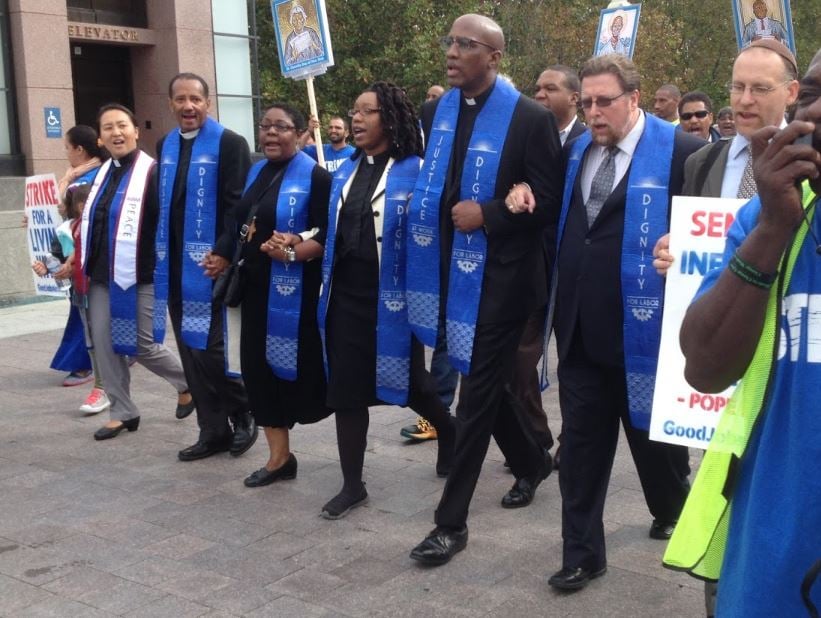 (RNS) On the anniversary of the assassination of the Rev. Martin Luther King Jr., dozens of faith leaders are calling for the U.S. presidential candidates to include a “living wage” for low-income workers in their political agendas.

The move comes amid growing momentum for a wage hike and just days after state officials of New York and California acted to increase their minimum wage to $15 an hour.

“Today, we call on all those who are seeking the Presidency of the United States to honor the legacy of Dr. King and stand in solidarity with all people who are seeking to achieve racial and economic justice in our society,” they say in an “Interfaith Call for Moral Action on the Economy,” that will be publicly released on Monday (April 4).

“By helping our nation’s most vulnerable workers achieve justice at work, the next President can lift millions out of poverty and secure a brighter future for all Americans.”

The campaign is focused especially on low-wage federal contract workers who cook for senators, clean the offices of generals and sell souvenirs to tourists at the Smithsonian’s 19 museums and the National Zoo. They say most make too little money to adequately care for their families.

They seek wages of at least $15 an hour, improved benefits and the ability to organize without retaliation.

Joseph Geevarghese, director of Good Jobs Nation, said it’s appropriate for faith leaders to link the cause of these workers with the legacy of King. The civil rights leader died in Memphis, Tenn., where he went to support a racial and economic equality campaign for striking sanitation workers.

Jim Winkler, general secretary of the National Council of Churches, is among the religious leaders supporting the effort to seek a pledge from candidates to help the working poor.

“This election is fundamentally about whether the next president is willing to take transformative executive action to close the gap between the wealthy and workers — many of whom are women and people of color,” he said.

Supporters of the campaign call the U.S. “America’s biggest low-wage creator,” with more than 2 million jobs through federal contracts, grants and loans.

“When low-wage workers don’t make enough to provide for their most basic needs, it is not just an economic issue — it is a moral crisis,” said Rabbi Jason Kimelman-Block, director of Bend the Arc Jewish Action.

The new phase of the ongoing campaign comes as fast-food restaurant employees plan to strike in 300 cities and other low-wage workers intend to protest on April 14.

Faith and labor groups worked together to encourage President Obama to make changes for low-wage workers. He has issued executive orders that call for raising the federal minimum wage to $10.10 and giving paid leave to federal contractors.

Leaders of those groups hope the next president will expand on those measures.

Republican candidates Donald Trump, Ted Cruz and John Kasich have not supported raising the federal minimum wage while Democrats support it. Bernie Sanders has pushed for a $15 wage and Hillary Clinton has supported increasing it from $7.25 to $12.

New York Gov. Andrew Cuomo and leaders of the New York Legislature announced an agreement Thursday that will gradually raise the state minimum wage to $15 by 2021.

The California Legislature passed a bill Thursday that will raise the state minimum wage to $15 by 2022. Gov. Jerry Brown is scheduled to sign it on Monday.