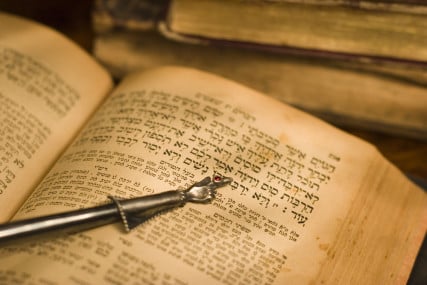 The text of the Hebrew Bible, with commentaries.
Credit: Orrza, via Shutterstock

Is there some kind of national competition between states going on — to see which one can become the most medieval?

That is certainly the way it seems.

First, North Carolina adopts a particularly draconian anti-LGBT law law — a set of restrictions that is already beginning to have deleterious effects on the state’s economy.

Then, Mississippi follows suit — with a law permitting businesses to discriminate against LGBT customers on religious grounds.

And now, the Tennessee legislature has approved a bill designating “the Holy Bible as the official state book.”

Of course. State bird, state flower — why not a state book?

Even pious Tennesseans agree that there are issues with this new law.

First, which version of the Bible are we talking about? The Holy Bible would include the Tanakh — the Jewish scriptures (and puh-leeze, not the “Old Testament,” which implies that God’s original covenant with the nation of Israel is, well, old and outmoded), as well as the New Testament.

But, is the Tennessee Text going to be the King James Bible, or the Revised Standard Version, or any of a library shelf’s worth of biblical translations?

Not only that. Let’s assume that the choice defaults to a Christian version of the Holy Bible. OK, fine — but again — which version? The Protestant Bible is different from the Catholic Bible, which includes the Apocrypha and other deliciously and undeservedly obscure works of shaky religious authority. (See the utterly magisterial three volume collection, Outside The Bible, published by Jewish Publication Society, as well as God’s Cutting Room Floor: The Holy Scriptures Missing From Your Bible by my friend, Joel Hoffman).

And not only that. Let me speak personally — about the Jews. We have our own way of interpreting the sacred text — through the lens of rabbinic interpreters, sages, and commentators. Not to mention the fact that, for Jews, the Bible is hardly the last word on almost anything.

So, you see, it gets a little dicey. The whole “which version of the Bible do we choose?” thing turns out not to be as easy as it looks.

Of course, the establishment of the Bible as a “state book” would be a violation of the First Amendment, prohibiting the state from establishing an official religion.

That being said, imagine if the Bible actually did become Tennessee’s state book. What principles would Tennesseans learn that might actually enrich civic life?

And those are just a few snippets from the Torah. I haven’t even gotten to the rest of the Jewish Bible. I would expect that Christians would find their own sources of inspiration in the New Testament, and those of other faiths, too many to name, in their own sacred writings.

I am merely saying this: if Tennessee must adopt the Bible as its state text, at the very least, let Tennesseeans find, learn, and live the holy words in that tome that speak to how we create a decent society.

Look around you. Has that project ever seemed more urgent?