Refugees have been on Mormons’ minds this last month, after the inspiring women’s conference in March introduced a global effort for Mormons to help refugees. Today, guest blogger Brandt Malone has some thoughts on why this has touched him.

And while we’re on the subject, can I direct you to an effort I’m proud to be involved in? Some writers and editors, many of them Mormon, have created a really fun auction with all the proceeds going to benefit refugees. Win a weekend with Princess Academy author Shannon Hale, or a hike with Matched author Ally Condie, or have a character named after you in the next Bishop’s Wife novel by Mette Harrison, who is a regular guest blogger here at Flunking Sainthood.

Or you could dust off your own book idea and bid for three hours of my time as an editor and writing coach. All to help refugees! Get your bids in soon—I think Sunday is the last day. –JKR 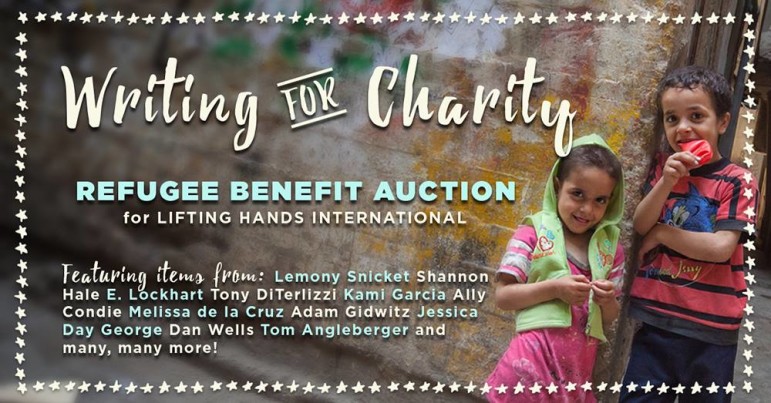 Put your bid in by Monday!

Over these last few weeks since General Conference, Elder Patrick Kearon’s talk on refugees is one that I find myself reflecting back on again and again. I felt a pull to watch both his talk, and President Uchtdorf’s emotional response, every day that first week.

I’m still not sure why Elder Kearon’s words resonated so much with me. I can’t say that I’ve been a vocal advocate for the plight of the refugee, or, frankly, that I have thought that much about it. It’s not as though his words had this confirming experience, where I could say “Finally! You’re addressing this!”

But since that talk, I have felt like the two disciples on the road to Emmaus: “Did not our hearts burn within us?” (Luke 24:32)

There have been so many instances when recent General Conferences left me frustrated. In recent memory:

These are just a few that stand out just in recent memory. Those specific examples don’t include some of the distressing extremism regarding modesty or the fetishization of the family while doubling-down on heterosexuality, despite the devastating effects on those who are homosexuals. While I find the disaffected online community can be hyperbolic in their angst over Mormon things, there are times when I begrudgingly have to agree, throwing my hands up in my own frustration and acknowledging their points.

I wonder if there is more to General Conference than cutsey memes, “theological Twinkies” and a focus on the strangest minutiae of detail, while seeming to ignore the larger issues going on in the world today – and specifically, outside of Utah.

Elder Kearon’s talk about assisting refugees was exactly what I needed. His call to the moral and Christian imperative to loving and helping our neighbors was like taking a deep breath and filling my lungs with air, despite years of feeling like I was breathing through an obstruction.

Here was a man not just reading a talk, not retelling the seemingly mythological experiences of a former LDS leader, but down in the trenches himself, working hand-in-hand with the people he was talking about. He came across as one deeply touched by this situation, and having that real-world experience translated to his passion about the refugee efforts.

I’m glad he included the following statement about the (potential) politics of the situation:

“There are highly charged arguments in governments and across society regarding what the definition of a refugee is and what should be done to assist the refugees. My remarks are not intended in any way to form part of that heated discussion, nor to comment on immigration policy, but rather to focus on the people who have been driven from their homes and their countries by wars that they had no hand in starting.” (emphasis mine)

I’ve heard from a few people who think that his call was to help only Christian refugees, despite the charge in the local leader guidelines (published on March 26, 2016) that the invitation to “provide relief and support for God’s children . . . regardless of their race, religion, or citizenship status.”

I wish for that message to be given over and over again: We’re not going to be helping just Mormon refugees, or just Christian refugees, but everyone. And if that is difficult for some members to reconcile, that’s a good thing. To quote President David O. McKay, “Let them reach for it.” (Prince, 160)

Part of me wonders if that is what we need in the church – a good radical charge, something to make people think more seriously about the religion they follow. Are we a religion that focuses only on our Mormon brothers and sisters that “fit the mold”? Are we expanding our vision to the many others that are out there?

More importantly, I think this also charges Mormons to consider how they can be good Christians. Good Christians don’t check things off a list, make sure they align with political leanings and social demographics, and then sit back and say “OK, I’m good for this month.” This is a prophetic call to action for all membership. Thankfully, we Mormons love a good challenge. The fact that “phones have been ringing off the hook at nonprofit agencies that assist refugees” after the General Women’s Meeting is truly inspiring, and makes me proud to say my fellow Mormons were up to the inspired charge to provide assistance to refugees.

When we are baptized, we take on the charge in Mosiah 18:9 that we “are willing to mourn with those that mourn . . . and comfort those that stand in need of comfort.” What better way to truly show Christian love for all of God’s children than to take up the cause of helping the helpless?