It’s that time of year again, when my Twitterfeed starts exploding with memes related to this weekend’s General Conference.

Moreover, the opening session of General Conference – the women’s meeting that happened last Saturday – was downright wonderful. The Relief Society’s focus on helping refugees and the emphasis of the whole “I Was a Stranger” program made me so happy.

That session inspired me to do more, to be more, and isn’t that the point of General Conference?

So why am I going into this weekend’s meetings with a spirit of grim resolve?

I’m reminded of an experience I had years ago when taking a group of kids trick-or-treating. At the very first house we went to, two-year-old Tyler got clobbered with the screen door and had to be comforted by his mother with copious hugs and an advance on his candy take for the evening.

When he was finally ready to proceed to the next house, Tyler mustered his courage and got through the ordeal without a problem. Then he proudly held up his pumpkin treat bag to show off its newest sugary addition.

“And Mommy!” he announced excitedly. “That guy didn’t even hit me in the head!”

Somehow after his initial experience Tyler had gotten the impression that trick or treating was going to be a kind of quid pro quo in which he submitted himself for abuse in exchange for candy.

He was over the moon to learn he could receive the candy without getting bloodied in the process. 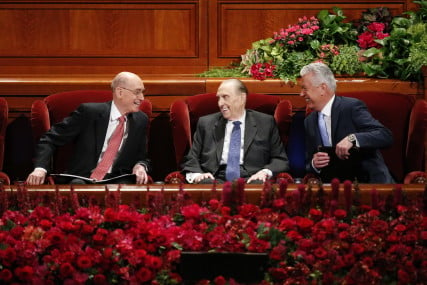 The First Presidency at the General Women's Session on Saturday, March 26, 2016 in the Conference Center. Copyright Intellectual Reserve, Inc. All rights reserved.

Like when our church leaders say that certain families that don’t fit our mold are counterfeit.

Or when they have the opportunity to select new leaders who reflect our church’s global diversity but instead default to three white men from Utah.

Or when they tell us that the gospel has to be all-or-nothing, and “selective obedience” is only practiced by people who give lip service to loving and honoring God. (For the record, selective obedience is what provides me with the ability to understand that a church that is 90% true is absolutely worth sticking around for despite my disagreements. Without selective obedience, I would no longer be Mormon, end of story.)

Yesterday I spoke with a reporter who wanted to know how progressive Mormons are feeling about this weekend, given that this is the first General Conference that has occurred since the LGBT policy change in November began defining some LGBT members as apostates and their children as unwelcome to receive baptism, baby blessings, and other rites of a Mormon childhood.

I can’t speak for others, but I’ll tell you how I feel: very apprehensive. Honestly, it has seemed to me that ever since that policy was leaked so disastrously, church leaders have made the problem even worse by attempting to dig in their heels and defend it -- most notably in January when Elder Nelson insisted that the new exclusions were founded in a revelation from God.

And yet I will go to General Conference, and I will try – using the best tools of selective obedience – to discern what is truthful and eternal among any remarks that are made because of fear, cultural conditioning, and human limitations.

I will pray for my leaders, and for myself, that we can all better glimpse what it means to live as God’s children.

I will listen for a prophet’s voice, just as the memes encourage me to do. But I will do so on my own terms.