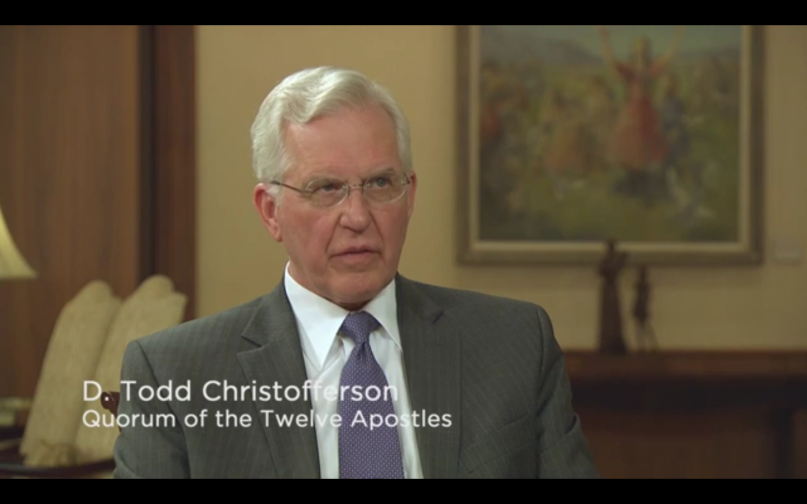 Last night, Elder D. Todd Christofferson of the LDS Quorum of the Twelve Apostles sat down with Church Public Affairs director Mike Otterson in an interview designed to “help Church members, the media and the public better understand the context and purpose of the changes, which have been discussed extensively in the news media, on social media and elsewhere.”

What I wanted Elder Christofferson to say:

“The media has blown all of this out of proportion, and misunderstood what we intended. No children are going to be denied baby blessings or baptisms just because their parents are in same-sex marriages! That would be inconsistent with the ‘all are welcome’ sign on the ward meetinghouse’s front door, not to mention D&C 20:70, which instructs all members of the church to bring their children forward to be blessed in the name of Jesus Christ.”

The essence of what he actually said:

I’m not sure which is more devastating: seeing the policy written in black and white, as I did yesterday, or hearing the gentle and avuncular Elder Christofferson, whom I admire, equate “no baptism” to “feed my sheep.”

The latter, I think. I cried. Something in my heart shriveled when this kind man defended this policy on forbidding baptism as being what Christ would want.

Elder Christofferson expressed compassion “and a desire to protect children in their innocence and in their minority years.” A baby blessing has been removed entirely as a possibility for these kids, for example, because it is a “trigger” for other things to happen in the Church: a membership record to be created, a home teacher to be assigned, an expectation that the child will eventually attend Primary.

“And that,” he said, “is likely not going to be an appropriate thing in the home setting, in the family setting, where they’re living as children where their parents are a same-sex couple.”

I am wondering about a few implications the Church seems to be suggesting in defense of these changes.

First, Elder Christofferson said that no one, upon reaching the age of majority, will ever be denied the blessings of baptism and the gospel if they denounce same-sex marriage. “Nothing is lost to them in the end if that’s the direction they want to go.”

This idea that “nothing is lost” is curious, since where I serve in Primary we spend an awful lot of time telling kids that being baptized and having the companionship of the Holy Ghost are crucial for them right now, in their childhoods. Church curriculum suggests there is a great deal at stake for them when they are still youth.

So, an honest question: Do we believe the presence of the Holy Ghost is a vital strength for kids to carry throughout their early lives, as we constantly say we do—perhaps especially during adolescence—or do we now profess a casual certainty that all of those lost years will be compensated for in adulthood?

A second point. Do we imagine that children born in same-sex marriage are the only ones for whom church membership or baptism can be contested questions?

We suddenly are evincing all this pastoral concern for children who might be forced to choose between the gospel and the way their parents are living. Meanwhile, thousands of kids in other situations learn to negotiate such circumstances all the time, including children with one parent who is LDS and another who is not (as in my own family). Yet we baptize those kids if that’s their desire and if both parents give permission.

Third, what is this sudden claim that we have long had a similar policy in place for children who grow up in polygamous circumstances? Elder Christofferson said they too have been denied baptism while living in their parents’ homes, and this has been the case “over many generations.”

He explained that the situation between same-sex marriage families and polygamous families “really has a parallel.” I don’t see it that way. Same-sex marriage was never once taught as church doctrine; the highest leaders of the church have never practiced it; it has never been linked to exaltation. Plural marriage used to be associated with all of those things.

So while I can understand why the current church needs to distance itself from polygamy in order to create a boundary between today’s teachings and those of the past, no such case can be made for the history of Mormonism and same-sex marriage. The church has always opposed it.

I’d also point out that up through the 2006 handbook, the stated policy toward children of polygamous marriages was not nearly as draconian as the new 2015 policy for children of same-sex marriages. Here is the 2006 policy: This 2006 policy never stated that such children had to wait until they were adults who were no longer living in their parents’ home, or that they couldn’t be blessed as infants.

Some of this was changed in the 2010 handbook, which more closely resembles today’s new restrictions on children of same-sex marriage. It still says nothing about these children having to wait until adulthood for baptism (though it stipulates that they must no longer be living in their parents’ home, which might imply adulthood), and it does not address infant blessings: 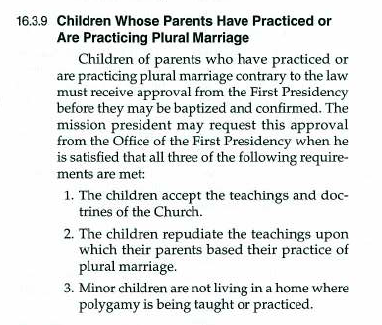 So, if by “over many generations” Elder Christofferson means “for the last five years,” then there is a very rough correspondence.

I am still feeling stunned and saddened that the Church has chosen to circle its wagons in this particular way, which hurts children, drives wedges in families, and further alienates LGBT members.