Before they became mired in sex and money scandals, the Bakkers introduced Winans and his sister CeCe to the millions watching their “PTL (Praise the Lord) Club” show on TV. And that paved the way for other black gospel artists like Yolanda Adams and Donnie McClurkin to reach a broad audience.

“The PTL Network allowed us to be introduced to a whole new audience, a white Christian audience,” Winans said. “And then when we started recording we broke down doors in the white Christian marketplace where they weren’t playing any black artists, Christian artists on those radio stations.”

Winans spoke in an interview in Washington, where a musical he co-wrote about his life story is set to begin in July at the Arena Stage.

“Born for This: The BeBe Winans Story” attempts to break Winans out of any particular box people may have put him in.

One of those boxes is the notion that he and his sister CeCe (born Benjamin and Priscilla) are joined at the hip.

“People assume that we don’t have separate lives, even though we’ve done as many years as solo projects,” he said.

The debut performances in Atlanta started in April and conclude Sunday (May 15) at the Alliance Theatre.

When Winans first shared his project with director Charles Randolph-Wright, also the director of “Motown The Musical,” the six-time Grammy winner known for rhythm and blues as well as gospel had a much wider plan for the theater stage.

“Originally what he had been working on was a project about the entire Winans family, which would take at least two weeks to do if you went every night for four hours,” said Randolph-Wright, in the joint interview with Winans. 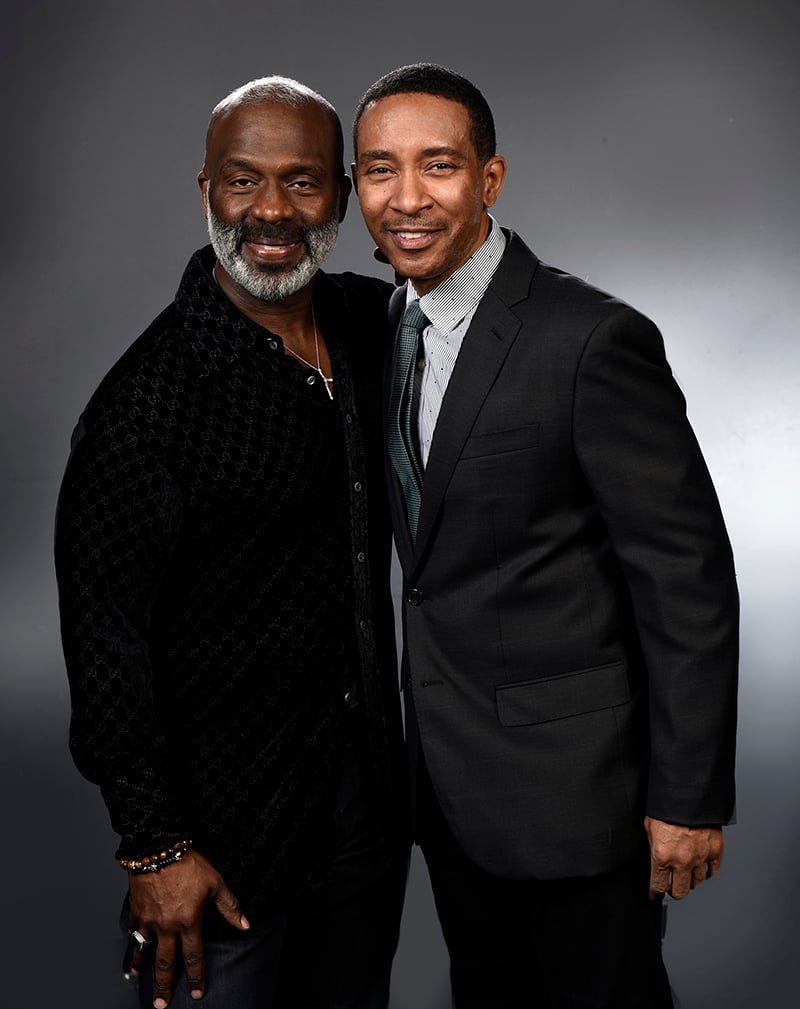 BeBe Winans, left, and Charles Randolph-Wright, right, have written a musical about Winans called “Born for This: The BeBe Winans Story.” It premiered in Atlanta in the spring of 2016 and is scheduled to make its Washington, D.C., premiere in the summer. Photo courtesy of Arena Stage at the Mead Center for American Theate

Randolph-Wright, who became co-writer of the production, homed in on a “tiny section” about the appearances of then-15-year-old CeCe and 17-year-old BeBe on the Bakkers’ show in Pineville, N.C. — which happened to be the director’s hometown.

Donte Alexander, 31, a Houston-based fan of the Winans, who traveled to Atlanta to see the play, said it captured how the singing duo helped integrate predominantly white Christian TV and their music crossed over to wider audiences.

“I just think it was their calling,” said Alexander, a member of the Church of God in Christ, the denomination in which the Winans were raised.

The actors who play the roles of Cece and BeBe Winans are actual brother-and-sister members of their family — Deborah Joy Winans, their niece, an actress who auditioned for Randolph-Wright’s “Motown” production, and Juan Winans, their nephew, a Grammy nominated-singer making his acting debut. 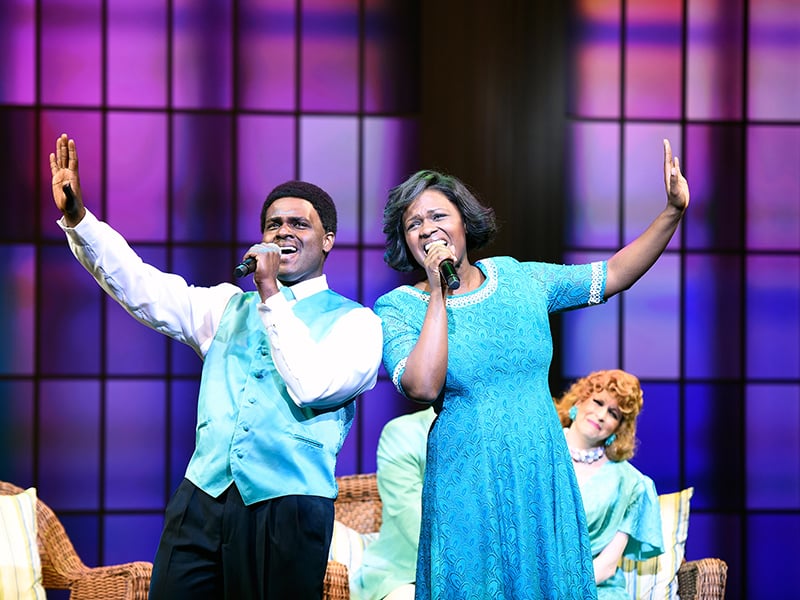 Left to Right, Juan Winans as BeBe, Deborah Joy Winans as CeCe and Kirsten Wyatt as Tammy Faye Bakker in “Born for This: The BeBe Winans Story,” which runs July 1-August 28, 2016 at Arena Stage at the Mead Center for American Theater. Photo by Greg Mooney, courtesy of Alliance Theatre.

Much of the play focuses on family — how BeBe Winans deals with his sister (and not him) getting the audition at PTL; how he and his brothers adjust when CeCe Winans gets married; and how he copes with the death of his closest brother, Ronald.

It also focuses on the intersection of fame and faith — for the Winans duo, their young friend Whitney Houston and the eventually scandal-plagued Bakkers.

Although it includes more than two dozen new songs written by BeBe Winans, the production features some of the songs that made the duo famous, including a version of “Up Where We Belong,” which they sang on the Bakkers’ show.

“That album sold a million copies for the PTL Club,” said Bil Carpenter, author of “Uncloudy Days: The Gospel Music Encyclopedia.” “You had to give a donation and they sent you the album.”

Carpenter, who later worked as a publicist and manager for members of the Winans family, was among those who paid to get the album, not realizing at the time how well known the then “little celebrities” would become across music categories as performers like Mary Mary are today.

But in real life and onstage, the Bakkers’ introduction of the Winans siblings to their TV audience gave the African-American performers a platform that prompted displeasure from white staffers on the show and racist threats by critics.

“They took care of us,” Winans said of the Bakkers, who he said were like a second set of parents as they appeared on the show, far from their family home in Detroit. “They looked out for us.”

Apparently more than the young Winans knew. After Carolina native Randolph-Wright wrote a scene about the threats, BeBe Winans ran it by Bakker, now 76, when he had dinner with the televangelist in Branson, Mo. 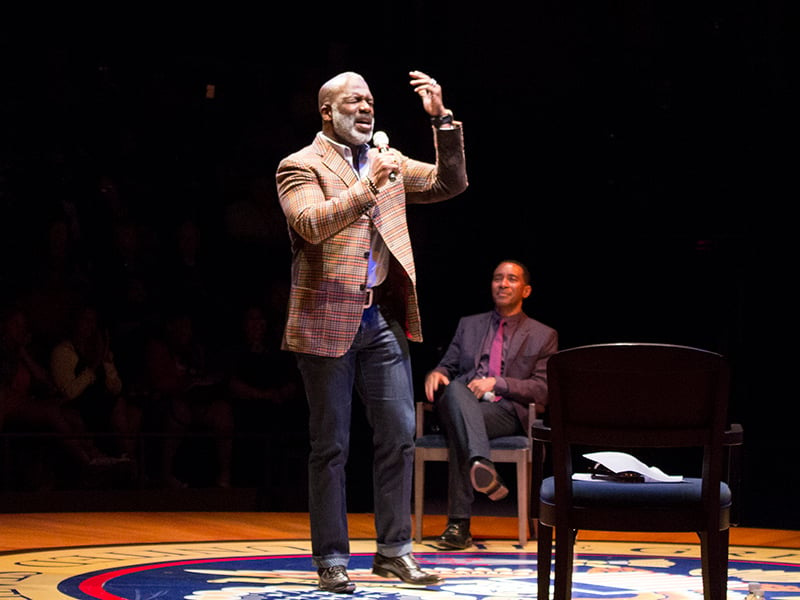 “He said, ‘Oh, yeah, we just kept them from ya’ll. We hid them from y’all. We protected ya’ll. But there was a whole lot of threats,” Winans told an audience at an early May event promoting the upcoming production in Washington.

In 2011, Winans got in touch with Bakker to invite him to the ceremony when he and his sister received a star on the Hollywood Walk of Fame. Bakker, who was not available for comment, also attended the “Born for This” opening in Atlanta.

The production is not billed as a “jukebox musical,” since it features songs beyond the ones the duo performed. Nor is it a religious revival. Like the rest of his music, Winans hopes it will defy categories — just as his career has — and simply be an inspirational production that some think could make it to Broadway.