PORTLAND, Ore. (RNS) United Methodists who want their church to sanction Israel are regrouping after a committee at their denomination’s General Conference rejected four divestment or investment screening resolutions over the weekend.

Those resolutions “pretty much went down in flames,” said John Lomperis, the director of the Institute on Religion and Democracy’s United Methodist Action Program and an opponent of divestment.

The church, which has 7.2 million members in the U.S. and 12 million globally, turned down similar resolutions at its last conference.

At this year’s quadrennial policymaking gathering of the church, supporters of selective divestment from companies to pressure Israel out of the Israeli-occupied territories now are rallying around several different plans for the 864 delegates to consider.

Divestment related to the territories has been a contentious issue at the conference, as it has been in other mainline churches, on college campuses and in trade unions in recent years. Divestment supporters say it can help Palestinians achieve independence. Anti-divestment groups say the strategy seeks to delegitimize Israel as a nation and ignores Palestinians’ role in the conflict.

Positive investments are not a substitute for divestment, according to Susanne Hoder, co-chair of the United Methodist Kairos Response, which had prepared the resolutions related to Israel’s occupation of the West Bank and East Jerusalem.

But, Hoder said, “Where we see opportunities to move forward together, we’re going to seize them, and I think we’ve demonstrated that in a conference where there are a lot of strong differences of opinion, we’ve managed to find a way forward to work together with people who have opposing views.”

RELATED: 6 things to watch at the Methodist General Conference

Of the four resolutions related to the Israeli occupation Kairos had prepared, one was voted down Saturday (May 14) by the church’s Finance Administration committee. Then three resolutions encouraging divestment were also rejected, according to the conference’s legislation tracker. The committee decided instead to favor a petition that had been amended into a general commitment to responsible investment.

Kairos Response now is supporting another amended petition, which commends the denomination “for developing investment policies that address human rights violations around the world,” according to Hoder. 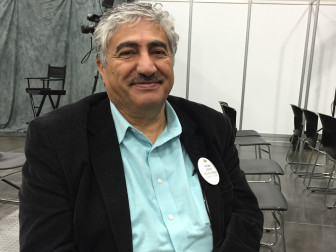 Jonathan Kuttab is a Palestinian Christian who splits his time between Washington, D.C., and Bethlehem in the West Bank, where he is chairman of Bethlehem Bible College. He came to the Methodist General Conference in Portland, Ore., to voice his support for divestment from companies to pressure Israel to end occupation of Palestinian territories. Photo taken on May 16, 2016. RNS photo by Emily McFarlan Miller

The church already opposes the occupation of the West Bank and East Jerusalem, and Palestinian Christian Jonathan Kuttab, who supports divestment, said divestment would turn its well-known positions “into something concrete — into action rather than just words.”

Kuttab — who splits his time between Washington, D.C., and Bethlehem in the West Bank, where he is chairman of Bethlehem Bible College — had come to the General Conference to express support for the proposed divestment resolutions. He says every Palestinian living inside and outside the territories has been affected by the occupation — adding that he has had to smuggle people to church in Jerusalem with him on Sundays.

This setback for divestment supporters came after the May 9 release of a letter from presidential candidate Hillary Clinton, a lifelong Methodist, in which she opposed the Boycott, Divestment and Sanctions movement as unfair to Israel and counterproductive to peace efforts between Israelis and Palestinians.

Lomperis, who also opposes divestment, said the move was positive, if a little surprising given the number of “Ask Me About Divestment From Occupation” buttons he’d noticed people wearing around the convention center. “Adopting any of these petitions would be a step toward darker days in Christian history,” given Christianity’s history of violence toward Jewish people, he said.

Delegates still could introduce the petitions about divestment related to Israel later this week, and Hoder, of the pro-divestment Kairos group, pointed out several individuals and groups — such as the United Methodist Young People’s Legislative Assembly and General Board of Church and Society — that had submitted the original resolutions to the conference and might be so motivated.

But Lomperis said it is “rare” at the General Conference for issues to be revived once committees have voted them down.

The question of BDS and Israel’s occupation has been a prickly one within mainline Protestant denominations, though the movement has been gaining traction. Though the Episcopal Church has rejected BDS efforts, the United Church of Christ in 2015 and the Presbyterian Church (USA) in 2014 voted to divest from companies they deem complicit in the occupation.

The vote at the Presbyterians’ General Assembly came after hours of emotional debate in which supporters painted desperate pictures of Palestinians who live under occupation, and opponents decried anti-Semitic elements within the BDS movement and its failure to address Palestinians’ role in the continuation of the conflict.

Among the four resolutions pro-divestment delegates had hoped to offer at the General Conference this week, one called for the church to divest from Caterpillar, Hewlett-Packard and Motorola Solutions, companies that have been criticized for supporting Israel’s occupation of Palestinian lands.