WASHINGTON (RNS) Atheists and other freethinkers gathered on the National Mall for their second “Reason Rally” in fewer numbers than organizers had hoped but with evidence of growing political acceptance.

Among them were many returning to the Mall four years after the first Reason Rally. The event Saturday (June 4) was billed as a “voter bloc party” at the epicenter of political power and with a clear view of Congress.

Its main goal was to show that nonbelievers, who make up as much as 23 percent of the U.S. public by some estimates, are a voting bloc worth courting in the November election.

“We say to our families, our communities and ultimately our government, which meets just at the other end of this National Mall, that we exist, we are good without a god,” declared Lyz Liddell, executive director of the Reason Rally Coalition, in welcoming remarks. “We can bring about social change and we are a growing voter constituency.”

Organizers had hoped for an attendance of 30,000, higher than the estimated 20,000 at the first Reason Rally in 2012 — when crowds contended with pouring rain. They estimated by mid-afternoon that 15,000 to 20,000 were in attendance on a warm, sunny day. But observers said the numbers seemed strikingly smaller in number than the previous event.

“The first time had the uniqueness factor, the historical factor, so that could be part of it,” said Amil Sibblies, 37, of Lanham, Md., a Jamaican-American who attended both events because secular gatherings are so rare. “This is still a good-sized crowd.”

The presence of politicians, including members of Congress and Maryland congressional candidate Jamie Raskin, a Democrat, was greeted with cheers and applause.

Raskin, a state senator who happens to be Jewish, noted that alliances between “progressive religious reformers of all faiths and secular humanists” have changed America by advancing justice and freedom in movements related to abolition, women’s suffrage, labor and environmentalism.

“Pragmatists all, they were not interested in interrogating each other’s private faith but in acting on a common public faith that America belongs to all of us and we should judge people not by their religious identities but by the character of their public actions,” he said, echoing a speech by the late Rev. Martin Luther King Jr. 53 years earlier near the same spot during the March on Washington. 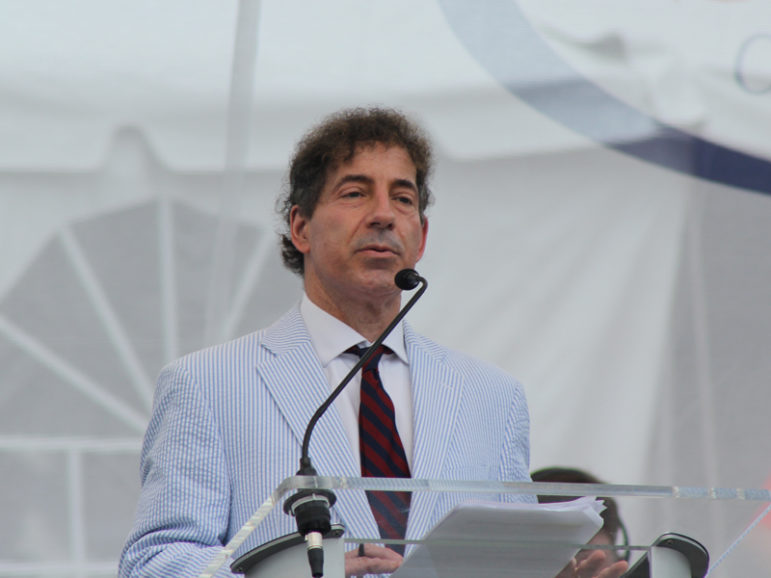 Raskin said such coalitions need to continue even as “we face titanic forces of unreason and fanaticism blocking our path.”

Liddell said Raskin’s presence, in addition to that of Reps. Bobby Scott, D-Va., and Tulsi Gabbard, D-Hawaii, was significant.

“For a very long time we were sort of the third rail of politics and touching our demographic was suicide,” Liddell said. “He’s showing that that’s changed.”

Politics aside, many in the crowd were simply glad to be around like-minded people for a day, fellow nonbelievers to whom they did not need to explain or apologize for their views.

Laura Duncan, 57, of Taylor, Mich., came with her friends from Michigan Atheists, which claims to be the oldest atheist group in the nation.

“It’s just really nice seeing people who think the same way you do after being isolated for 50 years,” said the former computer programmer.

Although the rally included many middle-aged white people like Duncan, people of color and millennials filled out the crowd.

M.C. Brooks, a musician and former Catholic who described himself as a “black atheist,” said the number of outspoken black nonbelievers is increasing but he would like to see a more varied attendance at future gatherings.

“I do think there does need to be more done on the diversity front,” the 28-year-old said, including women, people of color and LGBT persons.

David Silverman, president of American Atheists and another key organizer of the event, took his turn at the mike to encourage people who do not believe in God to stick to one word to describe themselves instead of the many other terms that are used — such as secularists, freethinkers and agnostics.

“We need to understand that we have a social responsibility to call ourselves atheists,” he urged, saying people should overcome “cowardice” and it would help others like them come out into the open. “When we hide behind euphemisms, we help nobody but religion.”

Sibblies, the second-time rally attender from Maryland, said that’s what he does.

“I call myself atheist because it’s the easiest thing for people to understand — very clear, and no room for misunderstanding,” he said. 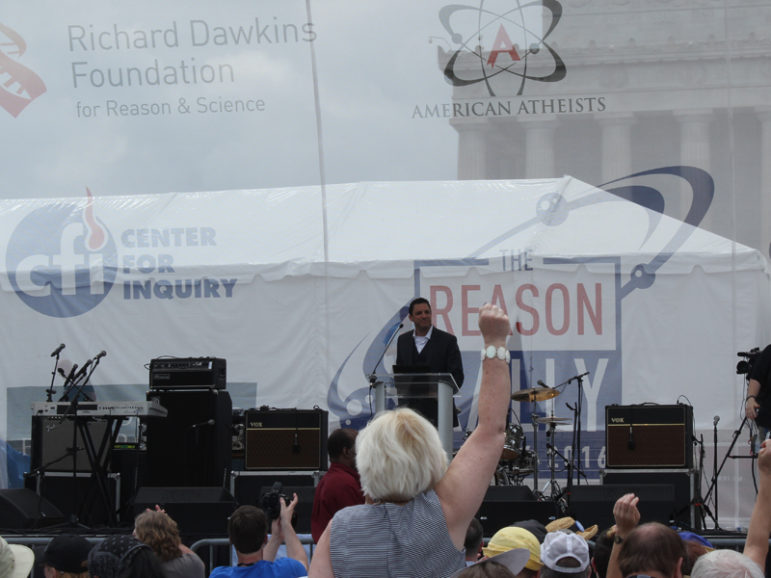 A woman raises her arm at the Reason Rally in Washington, D.C., on June 4, 2016. On the stage is American Atheists President David Silverman. RNS photo by Adelle M. Banks

Not everyone welcomed the atheists to the National Mall. A small band of Christians with colorful signs about hell and sin stood across the street from the Lincoln Memorial and engaged those who were willing in theological debates as they passed by.

Marvin Richardson of Tysons, Va., said he merely spoke to the sign carriers for “some entertainment.”

But for Carlos Diaz, an assistant pastor who traveled from Fort Worth, Texas, to challenge ralliers, it was more serious business: “To tell the people the truth about Jesus Christ.”