What happens when one of America’s most outspoken conservative Christians speaks at the largest Christian conference focused on progressive social justice issues? All hell breaks loose, that’s what.

Attendees of The Justice Conference (TJC) fell silent on June 4 when Russell Moore delivered a keynote talk decrying “the violent act” of abortion. But silence gave way to protest when the president of the Southern Baptist Convention’s political arm shifted his focus to homosexuality midway through his 26-minute talk.

“[Some Christians are] afraid to speak up on a biblical view of issues of human sexuality because they’re afraid that somehow that means they will be associated with people in polyester somewhere that they don’t want to be like,” Moore said, “How cowardly!”

At this point, one attendee noted “an audible ‘wow’ from somewhere on the other side of the sanctuary…a moment of shocked silence…snarky murmurs.” A handful of apparently frustrated attendees even stormed out of the venue in protest. In the next session, speakers Lisa Sharon Harper and Rev. Traci Blackmon took subtle swipes at Moore’s comments and affirmed LGBT people.

Following Moore’s talk, some conservatives celebrated the brave proclamation as a helpful framing of today’s most pressing issues. They saw his comments as truth spoken in love. But progressive Christians voices condemned his comments, with some characterizing them as “hateful.” But neither assessment seems fair or complete. 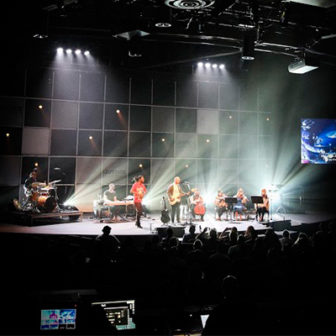 Vickie and Mark Reddy, executive producers of TJC, told me they knew they were taking a risk when they invited Moore to speak “on the subject of a consistent ethic of life.” But it’s easy to understand why they took the gamble.

Since assuming the reins of his organization in 2013, Moore has taken positions on immigration, refugees, animal welfare, and the Confederate flag that aren’t exactly GOP-approved. He has even denounced ex-gay reparative therapy while many of his evangelical colleagues support it. At the same time, he has held the line on cornerstone conservative positions when it comes to opposition of abortion and gay marriage. This has made Moore a bit of an enigma, simultaneously liked and disliked by both conservatives and liberals.

Moore’s predecessor, Richard Land, was a gruff partisan. Under his leadership, the Southern Baptist Convention became something of a mouthpiece for the Republican party and tarnished the denomination’s credibility. But Moore almost revels in being the anti-Richard Land, and his winsome and unpredictable approach has improved the denomination’s reputation. If Russell Moore didn’t exist, Southern Baptists would have to invent him.

Given Moore’s passionate opposition of abortion, the Reddys expected that his talk might be “somewhat controversial” among many attendees. They characterized Moore’s defense of a pro-life ethic as “considered and reasonably measured.” But the Reddys were less than satisfied with Moore’s comments about human sexuality, a topic they felt was unrelated to the one about which they invited him to speak.

“If we are silent about what the Scriptures and 2,000 years of Church history has taught us about human sexuality and what it means to be right with God and what it means for children to grow up with both a mother and a father, if we are silent at any of those points then we’re really not justice people, we’re really not Gospel people,” Moore said. “We’re just people who are protecting our platforms and we’re just choosing on which one to stand.”

Vickie Reddy said she felt Moore unfairly linked a pro-life position with a traditional Christian view on marriage and sexuality. She noted that the tone Moore employed was hurtful to some, but not “hateful.” Many LGBTQ Christians attend the Justice Conference, which “does not have a position on sexuality.” The Reddys say they haven’t decided whether they’ll post the talk online or when due to the talk’s effect on some attendees.

“Dr. Moore’s message is his prerogative, and we regret the hurt caused,” Vicky Reddy said. “The controversy, and anger raised were not in keeping with the values of our community.”

Daniel Darling, vice president of communications for Moore’s organization, told me that he is confounded anyone “could have felt unsafe” due to Moore’s comments.

“I do think it’s remarkable that anyone at an evangelical conference could consider to be ‘controversial’ an affirmation of traditional, orthodox positions on things like justification by faith, the doctrine of hell, or a Christian sexual ethic,” Darling said. “I just don’t think there’s anything hateful about calling people’s attention to issues that Scripture addresses and that the church has believed.”

While they may disagree on whether Moore’s talk was kind or true, Darling and Reddy agree that it wasn’t “hateful.” I have often lamented the reckless use of this word to describe anyone who espouses a view with which they disagree. The h-word has become a grammatical casualty in the hands of some people–mostly progressives.

Hate is real, of course, and some people do harbor it against others. It is not a myth or a fable. But we’re quickly approaching a moment, if we’ve not already reached it, where true hate is conflated with any unpopular opinion. This word is just too powerful, too explosive, too damaging to be used imprecisely.

Moore is no hater of LGBT people. After 50 gay people were murdered at the Pulse nightclub in Orlando last week, Moore called on Christians to “love and serve and weep and mourn” with their LGBT neighbors.

Christian, your gay or lesbian neighbor is probably really scared right now. Whatever our genuine disagreements, let's love and pray.

Many in our world glorify “tolerance”—a word that is often scoffed at, but one I believe is quite valuable. Yet those who champion this virtue are often quick to abandon it upon encountering people with whom they intellectually diverge. Tolerance is not Lombard Street; it runs both ways. The progressive Christians who attend the Justice Conference cannot claim to be tolerant if they gasp, protest, or storm out when anyone presents a dissenting view.

But just because Moore’s words were not hateful doesn’t mean they were helpful or prudent either. It’s less-than-kind to label Christians of mutual goodwill “cowardly” simply because they interpret the Bible differently than you do and disagree about human sexuality. While changing the epithet “coward” to the adverb form “cowardly” takes the edge off, the effect is similar. Rather than raising a point of genuine disagreement, Moore made a judgment of character and motivation.

The most impudent comment, however, was Moore’s contention that certain attendees are “not Gospel people.” There is a troubling trend among some Christians today to speak and act as if they hold the deed to the word “gospel.” While this word has been used as a noun by most Christians for millennia, these believers have transformed it into an adjective. The adjectival form of “gospel” then gets affixed to anything or anyone that aligns with these individuals way of being Christian. The good news of Jesus, as it is formulated in the New Testament as well as the historic creeds has never asserted a position on human sexuality. To claim that somehow one’s position on the matter means they are “not Gospel people” is a unnecessarily inflammatory, theologically imprecise, and historically unique way of speaking about one’s fellow Christians.

A day is quickly approaching when most American Christians may question the mettle or faithfulness of anyone who espouses Moore’s view on this matter. To avoid unnecessary divisiveness on this issue then, we should have a full-throated conversation now. We need to hear from voices on both sides of this debate, and we need to hear from Russell Moore. But these conversations must be carefully articulated in the right forums and at the right time and in the right way.

One of the best ethical standards for judging one’s tone and rhetoric is also one of the oldest: The Golden Rule. In Matthew 7, Jesus said, “In everything, do to others what you would have them do to you.” Given the importance of this discussion, it’s worth asking whether Moore embodied that ethic in this talk.

Would Russell Moore let a Christian who affirms homosexuality speak at an ERLC conference? Would he lend the stage to a Christian who opposes gay marriage like the Reddy’s offered theirs to him? And if Moore invited a more progressive Christian to speak about another topic, would he appreciate it if they used his platform to speak words they knew might offend attendees?

I asked Darling about this in a follow-up email to his previous response. He did not respond. I asked the question again, and Darling again did not respond. While I do not believe Moore would want done to him what he did to others in this case, given his organization’s silence, we can only speculate.

This situation offers much for us to appreciate and learn from.

Moore demonstrated courage in speaking opinions he knew would be unpopular. We need more people like Russell Moore who are discontent insulating inside echo chambers and willing to cross lines of disagreement for the sake of dialogue. I can affirm his spirit, even though I question his execution.

The Reddys demonstrated what true tolerance looks like by inviting Moore to speak. I’m glad they did, and I hope this experience does not discourage them from inviting other conservative speakers in the future. Every Christian benefits from regular exposure to challenging, even unpopular, opinions.

When there is a clash of Christian conviction, hell doesn’t need to break loose. May we learn to be tolerant of those with whom we disagree, and when we speak, may our words be plated with 24-karat kindness.

@andrewtwalk Are you aware of the hateful things Moore said once he got there?