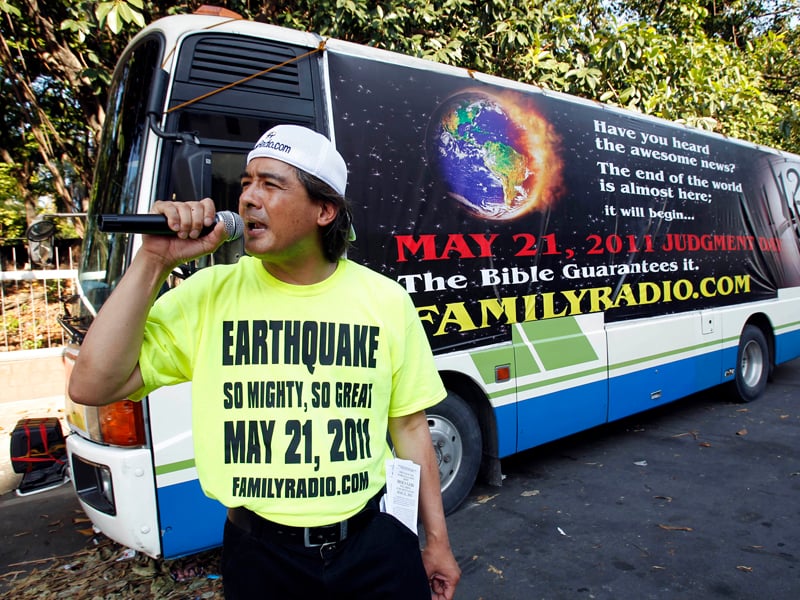 Filipino-American Joel Abalos, 48, and other members of a religious group called Family Radio spread their predictions that the world will end on May 21, 2011, on the streets in Manila May 13, 2011. The U.S. based Christian group took to the streets of Manila earlier this week to preach that the end of the world is fast approaching on May 21 at sunset, to be precise. Photo courtesy of Reuters/Romeo Ranoco *Editors: This photo may only be republished with RNS-GUSHEE-OPED, originally transmitted on Sept. 20, 2016.
September 20, 2016
David P. Gushee

American Christians tend to vacillate between cultural engagement and withdrawal, and between hope and despair, depending on how we read the historical moment in which we find ourselves. This tends to produce a manic-depressive pattern that works neither for Christians nor for anybody who has to listen to Christians.

In my new book, "Letter to My Anxious Christian Friends," I argue for a posture of steady, constructive, faithful cultural engagement for Christians in the United States, regardless of what we think is going on at any particular moment. This is better Christianity, I suggest, and far more likely to have a constructive impact on society.

My object lesson in what not to do has for some time been provided by the Christian right. My reading of the 40-year history of the U.S. Christian right is that their cultural engagement has tended to be characterized either by triumphalistic overconfidence in the imminent reclaiming of America for Christ (as they understand Christ) or a despairing anger that the culture seems to be slipping further and further out of Christ's reach.

When things go their way, as for example, in the election of a preferred politician like Ronald Reagan or George W. Bush, the Christian right has tended to go gaga, with a renewed Christian America now just around the corner and God's hand of blessing back on America.

But when things go against them, as for example, when a Democrat gets elected president or a Supreme Court decision violates their values, the right tends to shift into despair mode, with the demons of Satan on the march and God punishing America for its sin.

This epic series of highs and lows may be helpful in mobilizing the troops or raising funds, but it tends to produce a pattern of public engagement that feels more like whiplash than anything else.

I have been doing a lot of reading in the progressive Social Gospel movement of the late 19th and early 20th centuries. This movement, centered around such figures as Shailer Mathews and Walter Rauschenbusch, sought a "social Christianity" that they believed both reflected the religion of Jesus and could be the indispensable factor in what Rauschenbusch called "Christianizing the social order."

It was quite striking to find, on a recent reading of Rauschenbusch's 1912 book by that name, a broad over-reading of the progress of social Christianity and its agenda, and the identification of this progress with the onward march of the Kingdom of God. Certainly the ideas that Rauschenbusch had been promoting were catching on in many circles, but the 1912 Rauschenbusch saw much more progress than was actually there. 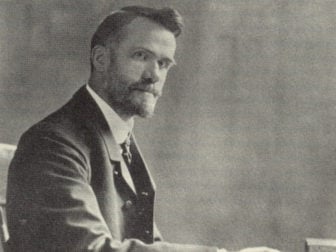 And of course Rauschenbusch could not see the carnage of the Great War that would begin just two years later. There was not a lot of "Christianizing the Social Order" happening in Verdun and the Somme. Indeed, the Great War broke Rauschenbusch's heart, and those who knew him said that he never really recovered from the war itself and from the vicious reaction he received when he raised questions about American involvement.

I am among those who have been permanently affected by the reading of Jesus that Rauschenbusch offered. I share his belief that Jesus' central message was of the dawning kingdom of God; that the kingdom is a social and political reality and not merely a spiritual one; and that the church should be a community dedicated to God's Kingdom and not fundamentally to its own interests or existence. This understanding of Jesus' message and mission almost inevitably takes a Christian out of a narrow focus on churchly matters and into social and political engagement with a transformative "kingdom" agenda.

But the enduring temptation in this culturally engaged form of Christianity, whether on the left or the right, is to assume that we here below have the capacity to interpret the small and large events of history in some kind of trustworthy and authoritative way. When we think we see kingdom progress, we rejoice; when we think we see kingdom defeats, we grieve; and we constantly claim to know what God is doing in and through historical events. This then gives us an awful lot of manic-depressive moments in our engagement with culture, not to mention a kind of manic-depressive God.

These days I am more attracted to the idea of faithful Christian witness regardless of circumstances and with much greater humility related to any attempt to read the signs of the times or to declare what God is or is not doing. It has not been given to us to know authoritatively what to make of history or of the success or failure of our efforts. Better for us simply to seek to love God and love neighbor each day and leave the interpretation of God's activity in history either to a later generation or to God.