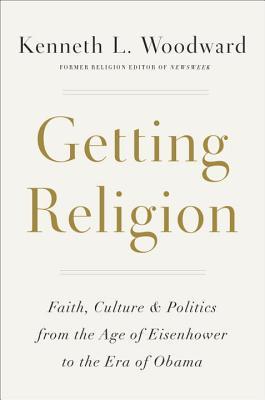 Getting Religion: Faith, Culture & Politics from the Age of Eisenhower to the Era of Obama by Kenneth L. Woodward (New York: Convergent Books, 2016).

“Getting Religion” is a concept born of H. L. Mencken’s observation that in the free market of American religion, citizens “get religion” when they convert or get steamed up. They do so in different ways and with different degrees of fever. Kenneth L. Woodward has taken the temperature regularly since the mid-Sixties (when he and I got acquainted and started following parallel but different paths, he in journalism and I as historian—and moonlighting in religious journalism). He was religion editor at Newsweek for over 40 years, where he could chronicle and interpret the dazzling, complex four decades of America and its people “getting religion.”

Last week he published a summing-up on “Faith, Culture, and Politics” in that period. Vatican II; religious revivals; civil rights; Vietnam War protests; “movement religion,” including women’s movements—these are a few of the catalytic and capstone clusterings of events here. I had read the manuscript, and this week reread what became a 447-page hardbound book. This is not a review; I am too close to the author and too involved in the times to gain objectivity and perspective. But I can advise readers that nowhere else are they likely to find a more informed, impassioned story of how Americans in these years “got” and kept—or abandoned—religion.

If this is not a review, what is it? A reflective response to the closing pages, which were not in the manuscript a few seasons ago, and which deal with what the author calls “The Recent Present” in his Epilogue. Some high spots:

“Segmentation is readily apparent in American religion.” When Woodward’s story began, Catholics and Southern Baptists made up 40% of the American population. Not now.

“The unanticipated surge in the nonaffiliated” has led observers to wonder whether the U.S. is following the European pattern of secularization. Not quite. Woodward instead sees a “winnowing effect” as more citizens are “self-identifying as Nones.” Since so many of the young are trending that way, religious communities suffer. Without community—church, club, cause, etc.—individuals engage in self-authentication as they seek recognition.

Families and neighborhoods have changed drastically, but “children have never been more dependent on parents for achieving later success.” So, despite working full time outside the home, “parents actually spend more time interacting with the children” than before. A half century ago collegians gave high priority to finding a “philosophy of life,” but now, under cultural pressure, collegians “take a decidedly instrumentalist view of higher education, and who can blame them?”

Morality, a big theme some decades ago, is harder to define and discern, to measure and promote. Woodward cites sociologist Christian Smith, who found and named a “moralistic, therapeutic deism,” which Woodward calls “religion with a shrug.” He sees himself now in old age, when one “pits the temptation to terminal self-absorption against the opportunity to exercise continued care and concern for those generations moving behind us,” which, he reveals, “may be the real reason [he has] written this book.”

This is a memoir, not an attempt at stand-at-a-distance history writing, and early short notices and critiques make quite a point of the fact that Woodward writes with a Roman Catholic sensibility and from a Catholic viewpoint. Which means that he is ready to let this book of memories start arguments, as many of his Newsweek stories and essays did. When almost overwhelmed by disturbing “existential facts of life,” he ends the book, as one would expect a person of faith to do, in some formula or other: “Christians like myself are called to abide in Faith, Hope, and Love. What matters is that God’s grace is everywhere.” I call such a sentence an affirmation that this friend has “got religion.”