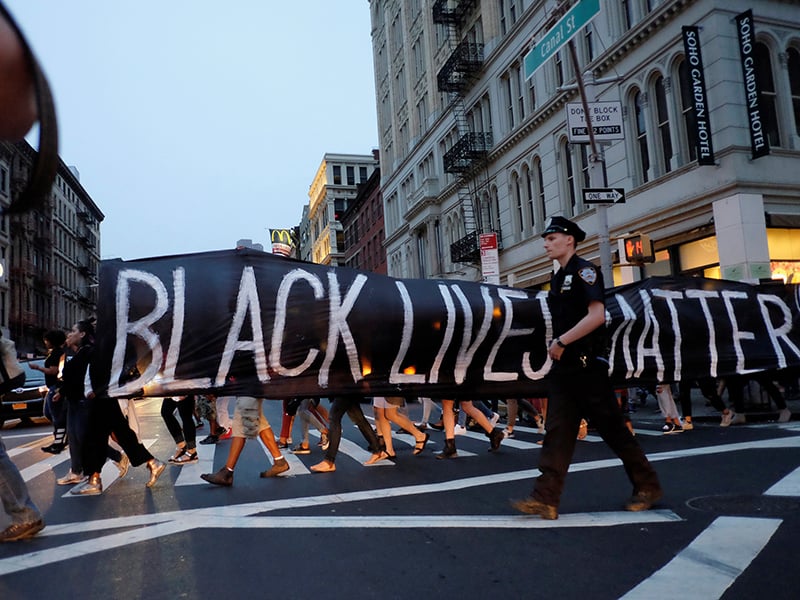 People take part in a protest against police brutality and in support of Black Lives Matter during a march in New York on July 9, 2016. Photo courtesy of Reuters/Eduardo Munoz/File Photo *Editors: This photo may only be republished with RNS-LUPFER-OPED, originally transmitted on Oct. 6, 2016.

(RNS) In a provocative opinion piece, Ken Ham blames black leaders for fueling racial tension. The noted “young-Earth creationist” asserts that there is only one race and that we are all colored people, just various shades of brown.

READ: Science and the Bible can help ease racial tensions

Many will dismiss Mr. Ham’s politically incorrect and mistaken assessment of the racial tension in our current moment:

“I urge President Obama, Al Sharpton, Jesse Jackson and others to abandon the word ‘races’ and use ‘people groups’ instead — to emphasize we are all one race, one blood and one family, and get away from any racist connotations.”

But I want to read him as charitably as possibly, validating some of his concerns even as I emphatically disagree with his diagnosis and recommendations.

Ham is something of a laughingstock to a wide swath of the public because of his prolific advocacy of young-Earth creationism, a view based on chronological lists in the Bible that God created the Earth in its present form only within the last 6,000 to 10,000 years. Most scientists believe the Earth is billions of years old.

Still, I can’t help but like Ham. When he  debated science educator Bill Nye in 2014, I was struck by Ham’s profound reverence for the wonder of creation. And though Ham lost the debate by any objective measure, Nye exemplifies a certain kind of elitist disdain for religious faith that ends up making me sympathetic to believers. Bill Nye, known from his 1990s TV show as “The Science Guy,” tours the exhibits aboard the full-scale replica of Noah’s Ark at the Ark Encounter theme park in Williamstown, Ky., with Ken Ham, president and CEO of Answers in Genesis. Photo courtesy of Answers in Genesis

Further, Ham has proved to be earnest and civil in his dealings with hostile opponents. He admits his beliefs are ultimately based in theology, not science. And he is upfront about the evangelistic aim of his $150 million Ark Encounter tourist attraction in Kentucky, an 800-acre monument to “the biblical worldview.”

Though born in Australia, Ham is thoroughly American: a layman, a generalist and an entrepreneur. He is not afraid to wade into issues on which he has no expert insight or qualifications. But as a writer who regularly opines about all matters of religion and politics, I can certainly relate. Where others may see ignorant bloviating, I see courage of conviction.

So I must concede that this Christian fundamentalist says things that are indisputably true, even as he errs in both his diagnosis and his prescriptions about racial disharmony in America.

An overconfident, scientistic extension of Charles Darwin’s theories tragically marred the 20th century, contributing to racism, colonialism and eugenics. Semantic imprecision about words such as ethnicity and race conflates categories and impedes dialogue.

And it may be more scientifically and theologically correct to regard humans as coequal fellows in one species than as members of different races, as Ham writes.

But even if well-intentioned, Ham’s conclusions are woefully inadequate.

Substituting the term “people groups” for “race” is not going to rectify the manifold injustices of a nation that was founded on the enslavement of millions of Africans and the near genocide of American Indians.

Even supposing Ham is right that we are all different shades of brown, his (and my) very light shade comes with considerable privileges and advantages that we absolutely must acknowledge. I’ll forgive his tone-deafness in declaring himself a colored person if he commits to honestly grappling with the devastating and lasting injustices actual people of color have suffered.

Ham says he is grateful that “we have the Bible to guide us in healing these wounds.”

But perhaps Ham and other very light brown conservatives should step back from their literalist interpretive framework and attend to broad themes from Scripture that cannot be reduced to a proof-text.

The Bible teaches that God has a special concern for people who are outcast, vulnerable or oppressed. This belief underlies an ecumenical Christian concern for social justice from which light brown American conservatives are conspicuous dissenters.

This is the theology of liberation we usually attribute to figures such as Gustavo Gutierrez or Jim Cone, but which flows from the pages of the Bible itself.

You do not have to be a progressive to see realities that Ham will not acknowledge: Racial prejudice is still a deadly problem. The criminal justice system is not colorblind. Structural, economic and political racism restricts opportunities for nonwhites. Sometimes it kills them.

Black lives matter. They matter to God, and they must matter to white Christians who imagine themselves to be the most biblically faithful.

Ham gets the science right, this time at least. We are one human family. But in suggesting that systemic racism is nonexistent or at least not worth addressing, he commits a theological error of biblical proportions.