ROME (RNS) The Jesuits, one of the world’s largest Roman Catholic orders, have elected their first Latin American leader, and he looks a lot like Pope Francis.

The Rev. Arturo Sosa, 67, is Venezuelan and was chosen in a secret ballot by 212 electors at the 36th General Congregation of the Society of Jesus in Rome after a lengthy four-day voting process.

“Latin America has always been a very strong Catholic region in the world,” said the Rev. Timothy P. Kesicki, president of the U.S. Jesuit conference. “Coming from Latin America is important, but he’s the best person for the job. He has a clear command, is consultational and a visionary.”

Sosa succeeds the Rev. Adolfo Nicolas, a Spaniard who resigned last week at the age of 80 after serving since 2008.

The Venezuelan’s election reflects the global demographic shift in the church, and in the Society of Jesus in particular.  Nearly 60 percent of the delegates to this year’s congregation came from the Global South, from Africa to Latin America.

Kesicki said Francis had put the Jesuits in the “global spotlight” and the Jesuits were seeing strong growth, particularly in the Asia Pacific region, in countries including India and Vietnam.

But he said Sosa’s election would also resonate with the community of 2,500 Jesuits across the U.S. and Canada. 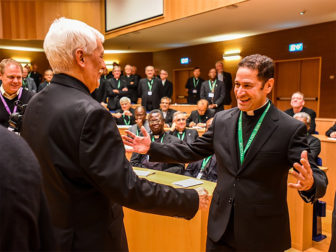 “The Jesuits in North America are very close to the Jesuits in Central and South America,” Kesicki said. “We share a similar history and experience in the new world.”

While the pope has known Sosa for some time and gave his blessing to his election, Kesicki stressed the pope had no direct influence on the outcome.

The election of the new leader followed a four-day process known as a “murmuration,” a centuries-old practice of one-on-one conversations and information exchange designed to build consensus for the selection of a new leader.

Sosa’s journey has already been compared to that of Pope Francis, the Argentinian who as Jorge Mario Bergoglio weathered the brutal dictatorship that enveloped his country in the 1970s.

The Venezuelan was a provincial between 1996 and 2004 and dealt with the dictatorship of Hugo Chavez.

With his strong expertise in political science and several years’ experience in Rome, many are also speculating about whether Sosa’s election may boost the Vatican’s role in the deteriorating political situation in his homeland.

Founded in 1540 by St. Ignatius of Loyola and his companions, the Society of Jesus is the largest order of priests and brothers in the church.

Jesuit priests and brothers are involved in educational, pastoral and spiritual ministries around the world and are known for their commitment to justice. They run a number of prestigious universities, including Washington’s Georgetown University.