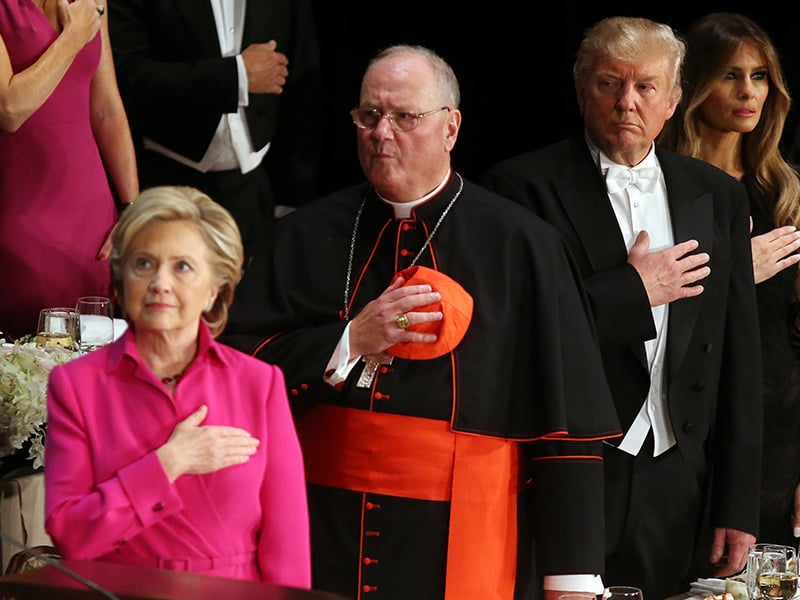 NEW YORK (RNS) The fallout from last week’s Al Smith Dinner is continuing, and not just for Donald Trump, whose cringe-worthy comedy at the traditional Catholic charity roast earned him the first boos in the history of the glitzy gala.

While some on the left were upset that the host, New York Cardinal Timothy Dolan, even allowed the Republican nominee a seat at the white-tie fundraiser, many on the right were angry — as they have been in past election cycles — that the archbishop also invited Hillary Clinton because she, like many previous Democratic nominees, supports abortion rights.

Now a potent voice among Catholic conservatives is arguing that “the Al Smith Dinner has become the Al Smith Embarrassment” and should be scrapped altogether.

“It’s time to give thanks for what it once did — and then give it a decent burial,” George Weigel wrote in a column on Wednesday (Oct. 26) published at First Things, a conservative journal of religion and politics.

Weigel argued that not only will the famous political roast inevitably showcase a Democrat who supports abortion rights, but it evokes an era when Catholics were striving to show they belonged.

Today, he said, the event’s “seeming indifference to grave moral issues are an impediment” to genuine evangelization and the $6 million that the Al Smith extravaganza raises could easily be found elsewhere.

A day earlier, another conservative commentator also said “it’s time to question whether the Al Smith dinner should be abandoned.”

“The implicit message is that although we may differ on some superficial issues, deep down we’re all friends who agree on the really important issues,” wrote Phil Lawler, editor of the Catholic news site CatholicCulture.org. “Well, frankly, we aren’t.”

But the person whose opinion probably matters most isn’t having any of it.

“The event is great and nothing can ruin the event,” Dolan said Tuesday on his weekly radio program on The Catholic Channel on SiriusXM. “In my mind, it’s America and the church at their best.”

Dolan stressed, as he has before, that the Alfred E. Smith Memorial Dinner, as it is formally known, not only raises money for an important cause but it shows how the church can bring foes together, even two as antagonistic as Trump and Clinton.

The cardinal did concede that the Oct. 20 event “maybe let us down a bit” because the candidates were not as self-deprecating in their humor as the ground rules call for; the benefit, which has run for more than 70 years, is supposed to be about “light humor and political savvy” and aims to provide a brief respite near the end of an intense presidential contest.

The candidates’ routines this time, however, “really almost became a stump speech, they almost really became a partisan speech, and that’s not the best,” Dolan said.

The booing for Trump, who delivered his remarks first and was widely blasted for ripping Clinton without being terribly funny, was unprecedented, Dolan said. It put a damper on “the spirit of the evening.”

But he stressed that the event still rose above all that.

Behind the scenes, for example, the two candidates – who couldn’t bring themselves to shake hands at the third and final presidential debate a night earlier – were brought together by the cardinal during a brief pre-dinner prayer.

“They were both icy from the beginning, you could tell,” Dolan said. “They’re not on each other’s Christmas card list, I can tell you that. You could tell those two had a rather, I’d say, frigid relationship, more than icy.”

But after the prayer Trump turned to Clinton and said: “You are one tough, talented lady.”

Clinton, apparently surprised by praise from the man who had called her “a nasty woman” the night before, responded: “And you and I must work together no matter what happens in the election.”

Then on the dais at the dinner, the famously gregarious Dolan said he did his best to thaw things. And it seemed to work at least briefly when it suddenly dawned on him that both nominees are Protestants who have daughters (Chelsea Clinton and Ivanka Trump) who married Jewish men.

“And they kind of had a pleasant discussion about this,” Dolan said. “So you try. But I don’t know how successful it was.”

The Al Smith Dinner is named after the first Catholic to head a major party ticket (Smith was trounced by Herbert Hoover in 1928, in large part due to anti-Catholicism) and the proceeds go to a charitable foundation that is also named after Smith.

In an election year, the archbishop of New York usually invites both presidential candidates for an evening of jokes and self-deprecating humor in honor of Smith, who was known as “the happy warrior.”