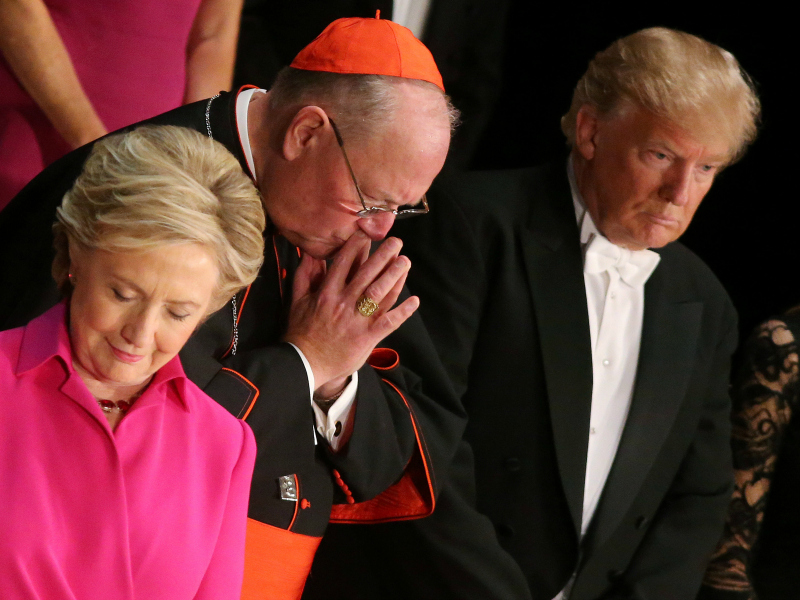 (USA Today) Donald Trump and Hillary Clinton shared the stage at a charity dinner Thursday night, and while there were moments of civility between the two presidential candidates, at other times there seemed to be more hostility in the air than during the previous night's debate.

The annual white-tie affair has historically been a place for the presidential candidates to make some good-natured jokes. Like many things related to this election, the dinner did not go according to tradition.

Trump took the stage first and his early jokes played well. The best-received one made light of the accusations of plagiarism that hit Melania Trump after her speech at the Republican convention.

"Michelle Obama gives a speech and everyone loves it. It's fantastic. They think she's absolutely great," Trump said. "My wife Melania give the exact same speech and people get on her case. And I don't get it."

And the boos began.

The boos got louder when Trump joked, “Here she is in public, pretending not to hate Catholics.” The joke was an apparent reference to one the emails released by Wikileaks.

Clinton got in several jabs of her own, although she didn't draw out the boo birds.

Here are some of the responses the uncomfortable dinner got on Twitter:

Trump is going to brood over this Al Smith dinner for days and tweet out bonkers stuff.

Trump: "Hillary is so corrupt, she got kicked off the Watergate Commission. How corrupt do you have to be?"
Room is silent. #AlSmithDinner

This is the most uncomfortable thing I've ever watched. What the fresh hell is this? (Sorry, Cardinal). #AlSmithDinner

No need to give me the nuclear codes. I already bombed. BIGLY. #AlSmithDinner

It's one thing to lose all three debates. How do you lose a scripted dinner when the jokes are written for you? #AlSmithDinner

This is the section in Trump's Al Smith dinner speech in which he started getting booed. It was a bit uncomfortable. pic.twitter.com/J6qbNZiogU

Wow, @realDonaldTrump, you got booed, in your hometown, at a dinner for a children's charity.

.@realDonaldTrump is giving one of the weirdest speeches in the history of modern American politics. #AlSmithDinner

everyone in the audience and at home #AlSmithDinnerpic.twitter.com/55DZcXtAJw

This guy is all of us #AlSmithDinnerpic.twitter.com/qkKIX1kJ4w

Well, at least they shook hands at the end.