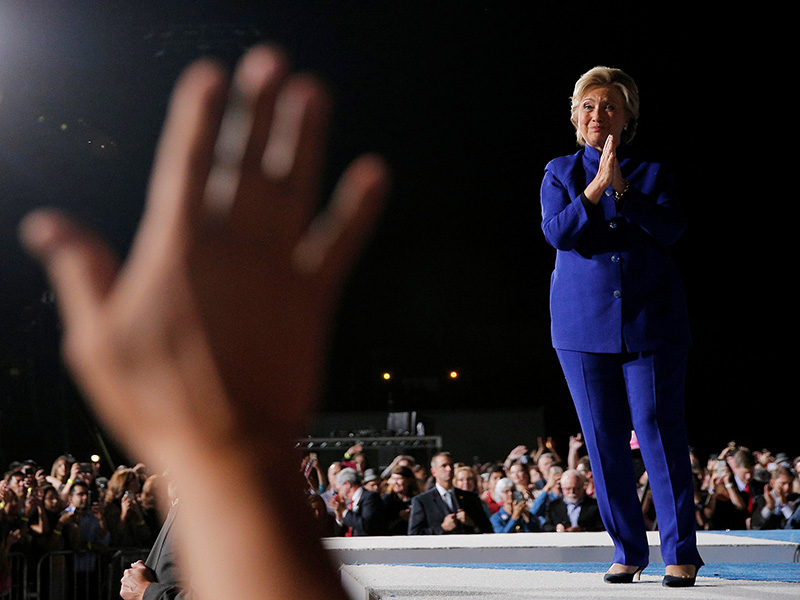 U.S. Democratic presidential nominee Hillary Clinton acknowledges the crowd at a campaign rally at Arizona State University in Tempe, Arizona, on November 2, 2016. Photo courtesy of Reuters/Brian Snyder *Editors: This photo may only be republished with RNS-MCGUIRE-OPED, originally transmitted on Nov. 3, 2016.
November 3, 2016
guest

Democratic presidential nominee Hillary Clinton acknowledges the crowd at a campaign rally at Arizona State University in Tempe on Nov. 2, 2016. Photo courtesy of Reuters/Brian Snyder *Editors: This photo may only be republished with RNS-MCGUIRE-OPED, originally transmitted on Nov. 3, 2016.

(RNS) The gender gap in the Catholic Church is old news, whether the subject is who embodies the church’s teaching authority or who gets to make the big institutional decisions. Now, as this deeply divisive election season draws to a close, new poll results from Public Religion Research Institute spotlight the Catholic gender gap on political preferences.

Hillary Clinton wins support from 49 percent of the same group of women, but only 33 percent from men. White Catholic women, together with the increasingly large Latino Catholic population that heavily favors Clinton, combine to drive Catholic voter choice to over 50 percent in favor of Clinton in the weeks prior to the election.

With the most misogynist candidate in our country’s history running for president against the first woman in our history to win a major party nomination, it’s little surprise that women favor Clinton over Trump.

But the issue goes well beyond gender, though Trump’s frightening track record on sexual harassment, by his own assertions, stands in stark contrast to Clinton’s long record of advocacy for pay equity and women’s rights.

The fact that a majority of Catholic women are on the same page as women voters nationally speaks to women’s shared concerns about access to health care for families, the rights of workers, care for the poor, abhorring racism, concern for environmental degradation -- all issues we find in Catholic social teaching.

What about human life? True, on the issue of abortion, the majority of Catholic women seem willing to vote for a candidate who is clearly pro-choice. Why? I do not know of any woman who is truly “pro-abortion,” as many of Clinton’s critics would say. In fact, polls show that higher percentages of women view abortion as being morally wrong than men. Our most fundamental role as women is about the lives we help to create, nurture, educate and grow into mature adulthood; we walk the journeys of so many human lives from birth through the final days. That’s truly women’s work; we get it about the sacredness of life.

But at the ballot box, abortion opponents like me -- using our prudential judgment, informed by our conscience -- must choose a candidate whose positions do not perfectly align with church teachings. We are voting for a president, not a pope. We want a president who can provide leadership for our country, a president who will move our broken government to function more effectively and more justly for all people.

I expect the president to be someone who knows how to work through opposition to forge the necessary compromises that are the real stuff of politics -- perhaps lacking the moral perfection we seek in church teachings, but striving to get a little closer each day to the ideal.

We need a president who not only gives voice to our shared national values, but who also understands the necessary give-and-take of politics in an immensely diverse and divided nation.

I expect the president to be someone who knows how to work through opposition to forge the necessary compromises that are the real stuff of politics -- perhaps lacking the moral perfection we seek in church teachings, but striving to get a little closer each day to the ideal.

What is most surprising about the PRRI poll results is not that Catholic women favor Clinton, but that so many Catholic men favor Trump. This is a man who has abused and humiliated women, shown appalling disrespect for people of many different races and religions and is proud of paying no taxes, thus failing to carry his fair share of supporting our common goods. He mocks the disabled, calls people names and encourages violence against anyone who disagrees with him. He lies so much that it’s hard to think that he’d uphold any promises he’s made, including those that might resemble Catholic teachings.

In prior years many bishops have wrongfully sent the unmistakable message that you cannot be a “good Catholic” if you vote for the Democratic candidate. This year, those same bishops are demonizing both candidates, knowing that a nod toward Trump would be unacceptable. Would that some bishop had the courage to speak out loud about the terrible danger of Trump; perhaps the men would follow suit.

Faithful citizenship tells us that it is our moral responsibility to vote. Like Catholic women, I prefer to choose a president who respects my voice, who reflects most of my values and who will listen without insult when we must disagree.

(Patricia McGuire is the president of Trinity Washington University, a college committed to the education of women, grounded in the Catholic tradition. The views expressed here are her own.)